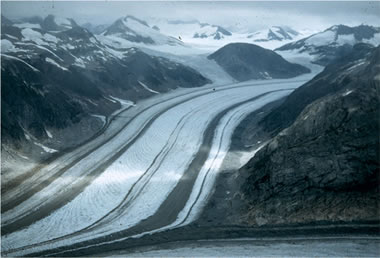 Bucher Valley Glacier in Alaska beautifully represents a large glacier that receives ice from multiple smaller glaciers that join it like the tributaries of a stream. Image by the United States Geological Survey.

What is a Glacier?

A glacier is a slowly flowing mass of ice with incredible erosive capabilities. Valley glaciers (also known as alpine glaciers or mountain glaciers) excel at sculpting mountains into jagged ridges, peaks, and deep U-shaped valleys as these highly erosive rivers of ice progress down mountainous slopes.

Valley glaciers are currently active in Scandinavia, the Alps, the Himalayas, and on the mountains and volcanoes along the west coasts of North and South America. The amazing, jagged landscape of the Southern Alps in New Zealand is also courtesy of the erosive power of glaciers. The lighting of the signal beacons in the movie The Lord of the Rings – The Return of the King [1] captures this famous landscape.

Continental glaciers (ice sheets, ice caps) are massive sheets of glacial ice that cover landmasses. Continental glaciers are currently eroding deeply into the bedrock of Antarctica and Greenland. The vast ice sheets are incredibly thick and have thus depressed the surface of the land below sea level in many locations.

For example, in West Antarctica the maximum ice thickness is 4.36 kilometers (2.71 miles) causing the land surface to become depressed 2.54 kilometers (1.58 miles) below sea level! [2] If all the glacial ice on Antarctica were to melt instantaneously, all that would be visible of Antarctica’s land surface would be large and small landmasses with scattered islands surrounded by the Southern Ocean 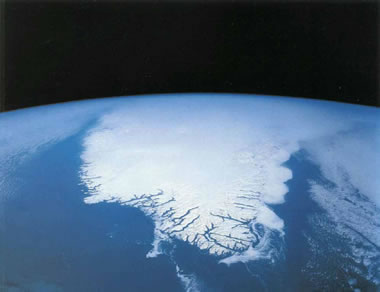 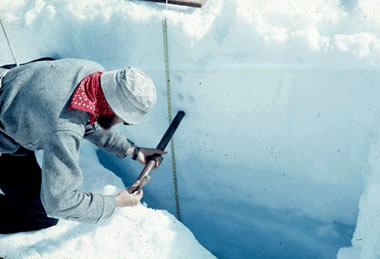 How Do Glaciers Form?

A considerable amount of snow accumulation is necessary for glacial ice to form. It is imperative that more snow accumulates in the winter than that which melts away during the summer. Snowflakes are six-sided crystals of frozen water; however, layers of fluffy snowflakes are not glacial ice…not yet at least.

As thick layers of snow accumulate, the deeply buried snowflakes become increasingly more tightly packed together. The dense packing causes the snowflakes to take on rounded shapes as the six-sided snowflake shape is destroyed. With enough time, the deeply buried, well-rounded grains become very densely packed, expelling most of the air trapped between the grains. The granular snow grains are called firn and take approximately two years to form. [3]

The thick, overlying snowpack exerts tremendous pressure onto the layers of buried firn, and these grains begin to melt a tiny bit. The firn and meltwater slowly recrystallize, forming glacial ice. This transformation process may take several decades to hundreds of years because the rate of glacial ice formation is highly dependent upon the amount of snowfall. (The recrystallization process means that glacial ice is really a type of metamorphic rock.) 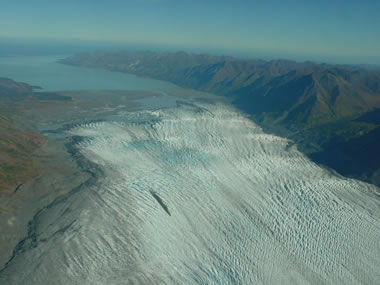 Tazlina Valley Glacier: Crevasses are visible near the thinning terminus in the zone of wastage. Note that the ice surface is dirty due to the accumulation of sand and gravel particles. Tazlina Valley Glacier in Alaska is retreating. Image by Bruce F. Molnia, USGS. Click the image to enlarge. 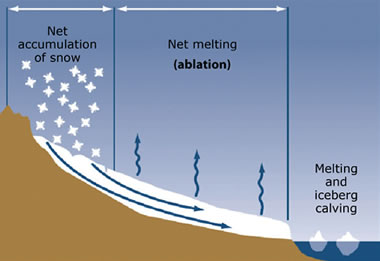 Zones of a Glacier: A cartoon cross-section through a glacier, showing the zone of accumulation and zone of wastage. Image by the United States Geological Survey.

How Do Glaciers Flow?

A glacier begins to flow when a thick mass of ice begins to deform plastically under its own weight. This process of plastic deformation (internal deformation) occurs because the ice crystals are able to slowly bend and change shape without breaking or cracking. Plastic deformation occurs below a depth of 50 meters (164 feet) from the surface of the glacier. [4]

If a great deal of slippery meltwater accumulates under the ice, the glacier may begin to advance very rapidly as a surge. Sometimes known as a galloping glacier, a surging glacier flows at a very rapid rate. For example, in the summer of 2012, Jakobshavn Glacier, located on the east coast of Greenland, was measured to be advancing at a rate of 46 meters per day (151 feet/day). [5] Jakobshavn Glacier is widely believed to be responsible for generating the large iceberg that ultimately sank the Titanic in 1912. 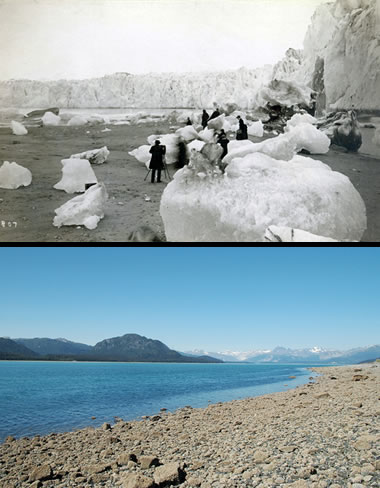 Before and After Photos: Photos taken at the same location location in Glacier Bay National Park and Preserve in Alaska. The upper photo shows Muir Glacier in the 1880’s and the lower photo shows the same inlet in 2005. Muir Glacier has retreated 50 kilometers (31 miles). Both images by the United States Geological Survey.

What Are the Zones of a Glacier?


The area of glacial ice formation is called the zone of accumulation. In this zone more snow accumulates each winter than that which melts away during the summer. Buried accumulations of snow turn into firn and eventually recrystallize into glacial ice.


The area of a glacier that experiences a greater amount of melting than glacial ice formation is called the zone of wastage (zone of ablation). In this zone, as the ice melts away, bits of sand and gravel on the surface of the glacier are left behind. It is important to note that glacial ice is always replenishing this zone as glacial ice continues to flow from the zone of accumulation.


The upper 50 meters of the surface of the glacier, where the ice does not undergo plastic deformation, is referred to as the zone of fracture. In this zone the ice is brittle and only deforms by cracking, breaking, and fracturing. Crevasses are fractures or breaks in the ice that may be hundreds of meters long and up to 50 meters deep. [4]


A Glacier Story About John Muir

John Muir wrote about one of his 1880 adventures in Alaska, when he and the camp dog, Stickeen, went on a lengthy hike up a valley glacier [6]. On the return trip their way was barred by crevasses, and John had to walk a considerable distance until he discovered a precarious, narrow ice bridge spanning a deep crevasse.

Understandably, Stickeen was quite reluctant to traverse the dangerous bridge of ice and John spent considerable time and effort coaxing the fearful dog to cross. Stickeen and John eventually returned safely to camp only to be accosted by his fellow campers who were quite upset with him. John had failed to let anyone know where he was going! 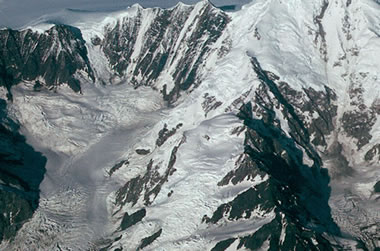 Why Do Glaciers Advance and Retreat?

How Does Climate Change Affect Glaciers?

The production of greenhouse gasses (e.g., carbon dioxide and methane) is contributing to a slow increase in global temperatures worldwide. According to NASA scientists, glacial ice is now melting at higher rates than ever before. [7]

Small valley glaciers across the globe are the most vulnerable to global climate change. According to the National Snow and Ice Data Center, approximately ninety percent of all monitored glaciers are in retreat. [8] For example, in 1910 there were about 150 valley glaciers located within Glacier National Park in the United States. In 2010, there were only 25 active glaciers left, and some of these remaining glaciers are in danger of disappearing by 2030. [9]

Glacial ice in Greenland and West Antarctica is also vulnerable to climate change. For example, Greenland ice is experiencing higher melting rates, with record melting catalogued in 2002. If either all of Greenland’s glacial ice melted or the West Antarctic ice sheet melted, the sea level would rise by 5 meters (16 feet). [10] The overall trend in glacier retreat worldwide reflects the increase in global temperatures. 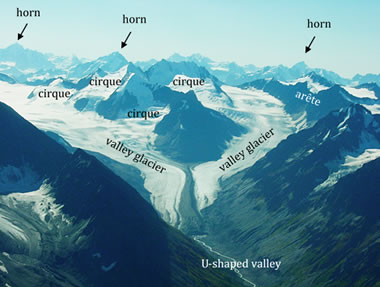 Glacial Landscape: Several small cirques are visible and each one is the zone of accumulation or birthplace of a small valley glacier. Two valley glaciers flow around a small horn and merge together to form a larger valley glacier. Once upon a time, the larger valley glacier flowed down the whole length of the valley, carving out a U-shaped valley. The glacier is in retreat because only a portion of the glacially carved, U-shaped valley contains ice. A meltwater stream issues from the glacierâ€™s terminus and flows down the ice-free portion of the valley. Image from the Chugach Mountains, Alaska by Bruce F. Molnia, USGS

What Are Some of the Erosional Features Carved by Valley Glaciers?

Several landscape features of glacial erosion are described below. You can view the accompanying photograph to see examples of each.

A cirque is a small bowl- or amphitheater-shaped depression.

An arête is a narrow, steep, jagged ridge of eroded bedrock.

A horn is a pointed, ice-carved mountain peak surrounded by cirques and arêtes. (A famous horn in the Swiss Alps is the Matterhorn.)

The next time you watch the lighting of the signal beacons sequence in the movie The Lord of the Rings – The Return of the King [1], try and identify some of these amazing erosional features.

Sara Bennett teaches geology classes at Western Illinois University and enjoys hiking in national parks. She encourages everyone to go for walks in natural places and become immersed in the Earth’s beauty.