Political Map of Australia and Oceania:

This is a political map of Australia which shows the countries of Oceania along with capital cities, major cities, islands, oceans, seas, and gulfs. The map is a portion of a larger world map created by the Central Intelligence Agency using Robinson Projection. You can also view the full pan-and-zoom CIA World Map as a PDF document. 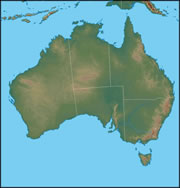 A map of the Australian continent that shows elevation with shaded relief. The areas with an elevation near that of sea level are shown in a dark green color, such as the Lake Eyre Basin in South Australia. Higher elevations are shown in shades of tan and brown, like the mountains of the Great Dividing Range along the eastern coast, the Macdonnell Ranges in the center of the continent, and the Hamersley Range in the west. The Darling River and Murray River are also clearly visible in the southeast.

Google Earth is a free program from Google that allows you to explore satellite images showing the cities and landscapes of Australia and the rest of the world in fantastic detail. It works on your desktop computer, tablet, or mobile phone. The images in many areas are detailed enough that you can see houses, vehicles and even people on a city street. Google Earth is free and easy-to-use.

Australia on a World Wall Map:

Australia is one of 7 continents illustrated on our Blue Ocean Laminated Map of the World. This map shows a combination of political and physical features. It includes country boundaries, major cities, major mountains in shaded relief, ocean depth in blue color gradient, along with many other features. This is a great map for students, schools, offices and anywhere that a nice map of the world is needed for education, display or decor.

If you are interested in the geography of Australia, our large laminated map of Australia might be just what you need. It is a large political map of Australia that also shows many of the continent's physical features in color or shaded relief. Major lakes, rivers, cities, roads, country boundaries, coastlines and surrounding islands are all shown on the map.

Map of the Australian Continent:

The map of Australia at the top of this page shows the continent and parts of Indonesia and Papua New Guinea. It presents the continent in the form of a Lambert Azimuthal Equal Area Projection. It views the Earth from a point located directly above 24 degrees south latitude and 132 degrees east longitude. It is what you would see from a satellite located immediately above that point and high enough above the Earth to see the entire map area. It is made by projecting all points on Earth's surface up to the satellite and recording them on a horizontal plane that is tangent to Earth's surface directly below the satellite. This type of projection best preserves the relative size and area of features on Earth's surface. 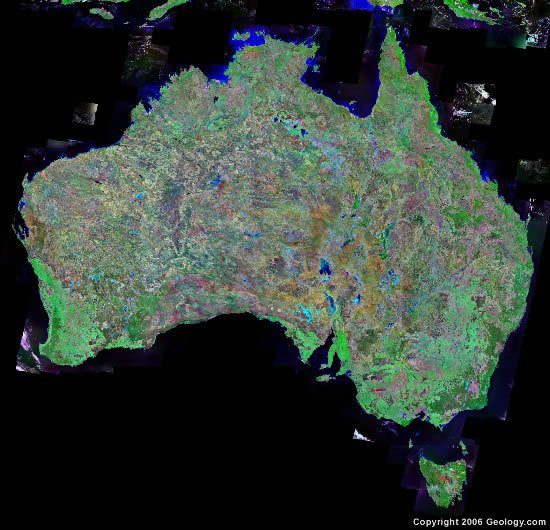 Australia has natural hazards which include severe droughts, and forest fires. Along the coast there are also cyclones.

The country of Australia has environmental issues related to soil and water. There is soil erosion from poor farming practices and overgrazing, and soil salinity due to the use of poor quality water. The clearing of land for agricultural purposes, industrial development, and urbanization have and continue to threaten the natural habitat of many unique animal and plant species. The Great Barrier Reef off the northeast coast, which is the largest coral reef in the world, is threatened by its popularity as a tourist site and increased shipping. Australia also has limited natural fresh water resources and problems with desertification.