Rock and landform features produced by cooling lava and magma.

Although all igneous rocks form from the solidification of molten material, they can have very different appearances and characteristics depending upon the composition of the original material and where exactly it cooled. Additional information about the igneous rock and volcanic landforms shown in this diagram can be found below.

Igneous rocks form from the solidification of once-molten rock material. When this mushy melt is found underground penetrating other rocks, it's called magma, and the solidified rock is termed intrusive. By contrast, molten material that has erupted onto the Earth's surface is named lava, which cools into what geologists call extrusive (or volcanic) rocks.

Because erosion can gradually remove tens of thousands of feet of rocks overlying intrusive formations, both extrusive and intrusive rocks can be observed on the Earth's surface, sometimes in close proximity. In the diagram above, the dike and the volcanic neck—despite the latter's name—are both intrusive features, whereas the fissure, lava flows, and volcanic cone are all extrusive.

Because different types of igneous features form under varying conditions, each offers tantalizing clues to the conditions under which it solidified.

Some of the most common igneous features include: 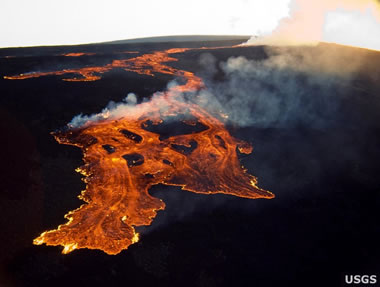 Lava flows are streams of lava that pour out of a volcanic vent or fissure. How quickly lava flows move, and how far they go, depends upon the type of magma that's erupting. Dark-colored magmas that contain relatively little silica (SiO2), like those observed in Hawaii, can travel further and faster than light-colored magmas, which tend to be much stickier. Lava flows can be very destructive, burying and burning everything in their paths. 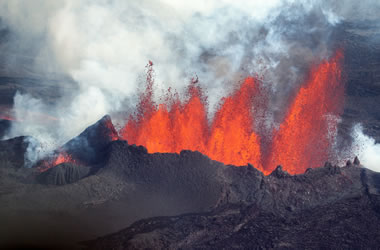 A long crack on the Earth's surface from which lava pours out is called a fissure. This type of volcanic activity is called a 'fissure eruption'. It most commonly occurs in places where dark magmas with low silica contents erupt, such as the Holuhraun lava fields of Iceland and Kilauea Volcano of Hawaii. 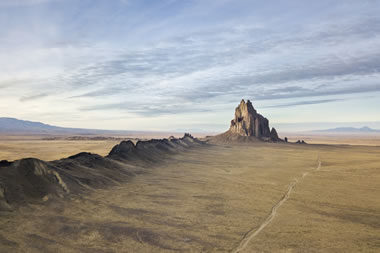 Named for its resemblance to the silhouette of a sailing ship, Ship Rock is a volcanic neck located where the main feeder pipe for a larger volcano was once located. The wall-like rock feature radiating outward from the volcanic neck is a dike (see below). Image copyright iStockphoto / Emre Corbaci.

This landform, which is also called a volcanic plug, is created when magma solidifies inside a conduit leading to a volcano or a volcanic vent. Because the resulting rock is typically harder than the material it intrudes into, it's left standing after the surrounding, softer rock has eroded away. This feature is therefore often called the "throat" of a volcano. A classic example is Ship Rock, a volcanic neck on the Navajo Reservation that rises nearly 1,600 feet above the desert near Farmington, New Mexico.

Although the use of "volcanic" in the name suggests that volcanic necks are extrusive features, they are comprised of intrusive igneous rocks. 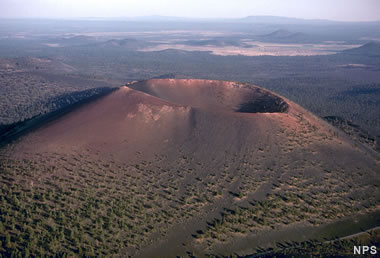 Volcanic cones are steep-sided hills or mountains built of layers of erupted lava flows and fragments of volcanic rocks that have piled up around a central vent. As the name suggests, these features tend to be conical in shape and can be light- or dark-colored. There are three types of volcanic cones: 1) cinder cones, composite cones, and shield volcanoes.

Sunset Crater in northern Arizona is an example of a cinder cone so young that local farmers almost surely watched it erupt about 900 years ago. 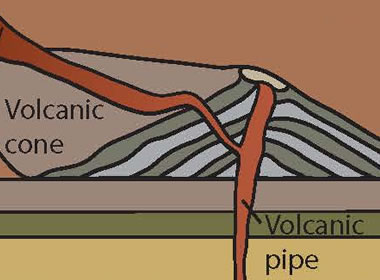 The main conduit through which magma rises in a volcano is called a volcanic pipe.

A volcanic pipe is a vertical conduit beneath a volcano through which magma once passed on its journey from the magma chamber to the eruption site. Over time, volcanic pipes usually become clogged by solidified magma and other volcanic rocks, leaving a hard, cylindrical-shaped formation behind. These features can range in width from several yards to approximately half a mile. 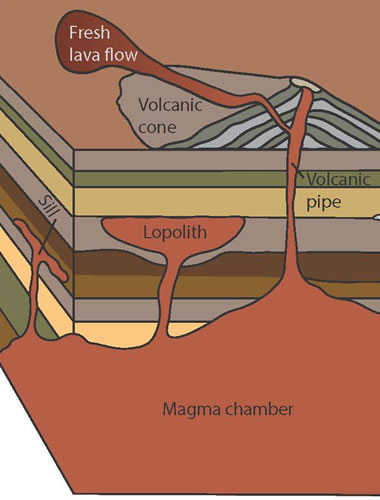 Areas where molten rock material pools underground are called magma chambers. They can be the source of both extrusive and intrusive igneous rocks.

A magma chamber is a pool of molten rock material located beneath the Earth's surface. Over long periods of time, magma chambers can crystallize into large intrusive igneous rock formations called batholiths. Magma chambers can be the source of both magma and lava.

An inactive magma chamber will cool slowly over time. This slow cooling allows the magma to crystallize into a coarse-grained igneous rock. Granite, gabbro, and diorite are examples of rocks that can form during the crystallization of a magma chamber. 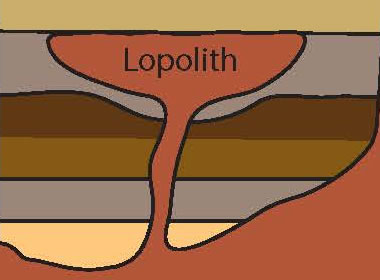 Lopoliths are intrusions of igneous rocks with bowl-shaped floors and either flat or bowl-shaped tops.

A lopolith is a large, layered igneous intrusion that is distinguished by the convex-downward bowl shape of its floor and whose top can either be flat or convex down. 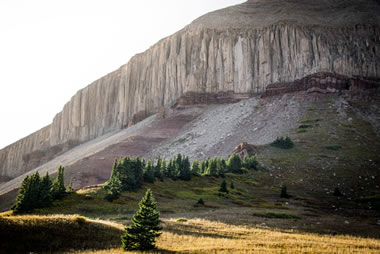 The sill near the top of Colorado’s Engineer Mountain displays vertical cracks that formed as this igneous rock cooled. Photograph by Daniel Weber.

A sill is a flat, sheet-like igneous rock mass that forms when magma intrudes into and crystallizes between preexisting rock layers. Sills can form from magmas with a range of silica contents. These features can vary from less than one inch up to hundreds of feet thick and can extend for many miles.

The tabular mass of quartz trachyte near the summit of Engineer Mountain near Silverton, Colorado is a well-known example of a sill. 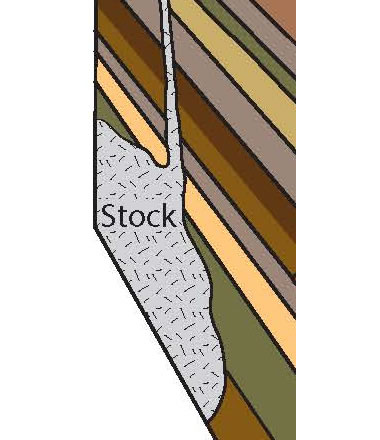 Stocks are small igneous intrusions with less than 40 square miles exposed at the Earth's surface.

A relatively small igneous intrusion that forms when magma crystallizes underground. Although uplift and/or erosion can later unearth part of a stock, this feature is defined as having less than 40 square miles (100 square kilometers) exposed at the surface. 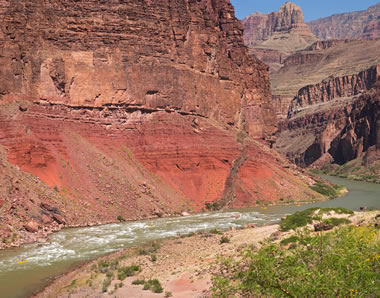 A tabular igneous intrusion that crosses through other (layered or non-layered) rocks at a steep angle. Dikes can occur alone or in sets and may be comprised of light (high-silica) or dark (low-silica) rocks, or any composition in between. One of the most-photographed examples comes from the Grand Canyon, where a dark dike slashes across thin, red shale layers above a frothing whitewater rapid. 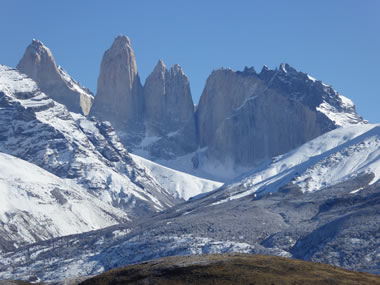 Laccoliths are intrusive igneous rock formations distinguished by their characteristic lens shapes. These features form when the pressure of the magma intruding between preexisting layers causes the overlying rocks to dome up, creating a mushroom shape. One of the world's most spectacular examples of a laccolith is found in Chile's Torres del Paine National Park. 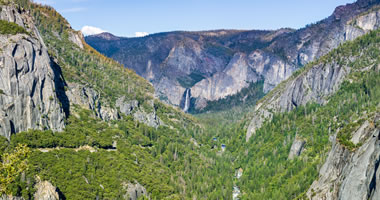 A relatively large igneous intrusion that forms when magma crystallizes underground and is later partially exposed following uplift and/or erosion. By definition, batholiths have more than 40 square miles (100 square kilometers) of surface exposure. The heart of California's Sierra Nevada mountains is carved from a granitic batholith emplaced between about 120 and 85 million years ago.

About the Author: Terri Cook

Growing up in a home whose cornerstone was a meteorite inspired Terri to become an award-winning travel and science writer. A geologist by training and a member of both the Society of American Travel Writers and the National Association of Science Writers, Terri weaves accurate, engaging stories for a wide variety of clients and outlets including the U.S. Geological Survey, Eos, Scientific American, and Lonely Planet. Terri is also the author or co-author of five books, including Hiking the Grand Canyon’s Geology, Geology Underfoot in Northern Arizona, and Geology Underfoot Along Colorado’s Front Range. She is a 2019 Association of Health Care Journalists Fellow, a 2016 EGU Science Journalism Fellow, and the 2019-2020 Science Communication Fellow for the Geological Society of America.