The Sliding Rocks of Racetrack Playa 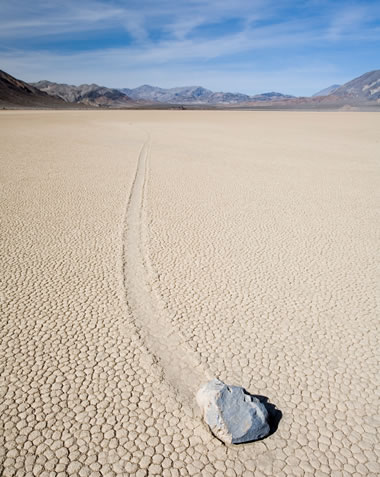 A sliding rock that has left a long track across the surface of Racetrack Playa. Some tracks are hundreds of feet long! (See below for several more sliding rock photos.) Image copyright iStockphoto / Steve Geer.

One of the most interesting mysteries of Death Valley National Park is the sliding rocks at Racetrack Playa (a playa is a dry lake bed). These rocks can be found on the floor of the playa with long trails behind them. Somehow these rocks slide across the playa, cutting a furrow in the sediment as they move.

Some of these rocks weigh several hundred pounds. That makes the question: "How do they move?" a very challenging one. 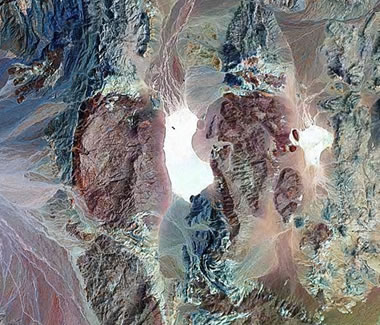 Landsat image of Racetrack Playa. It is the flat white area in the center of the image. Click for more detail.

Racetrack Playa is lake bed that is almost perfectly flat and almost always dry. It is about 4 kilometers long (2.5 miles) - north to south and about 2 kilometers wide (1.25 miles) east to west. The surface is covered with mud cracks, and the sediment is made up mainly of silt and clay.

The climate in this area is arid. It rains just a couple of inches per year. However, when it rains, the steep mountains which surround Racetrack Playa produce a large amount of runoff that converts the playa floor into a broad shallow lake that might be just a few inches deep at the low point of the playa. When wet, the surface sediments of the playa are transformed into a very soft and very slippery mud. When the mud dries out, mud cracks that typically cover the floor of the playa are formed. 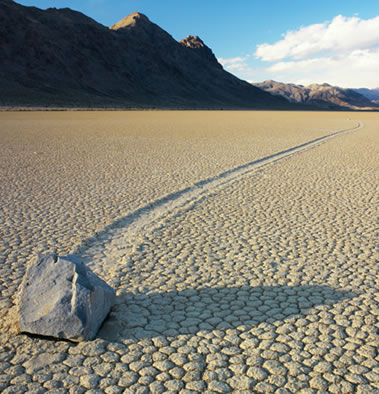 Are They Moved by People or Animals?

The shape of trails behind the rocks suggest that they move during times when the floor of Racetrack Playa is covered with a very soft mud. A lack of disturbed mud around the rock trails eliminates the possibility of a human or animal pushing or assisting the motion of the rocks. 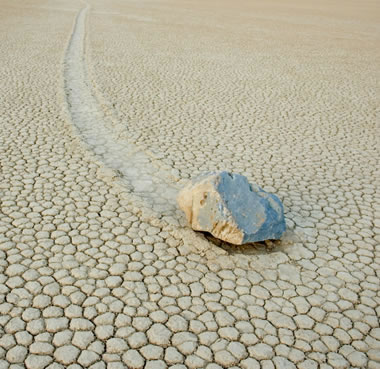 Closer view of the sliding rock in the top image on this page. Image copyright iStockphoto / Skye Bajoul.

Are They Moved by Wind?

This was once the favorite explanation. The prevailing winds that blow across Racetrack Playa blow from the southwest to the northeast. Most of the rock trails are parallel to this direction. This is strong evidence that wind might be the force that moves the rocks or is at least involved with the motion of the rocks.

Strong wind gusts or "hurricane force winds" were originally thought to nudge the rocks into motion. This was thought to occur when the playa was very wet, immediately after a rain that converted the surface of the playa into a slippery mud. Once a rock began to move, a wind of much lower velocity could keep it in motion as it slid across the soft and very slippery mud. Curves in the rock trails were explained by shifts in wind direction or in how the wind interacted with an irregularly-shaped rock.

The problem with the wind moving the rocks is that many of the rocks weigh several hundred pounds and are embedded a few inches into the mud of the playa. It is unlikely that wind alone could move these large rocks. 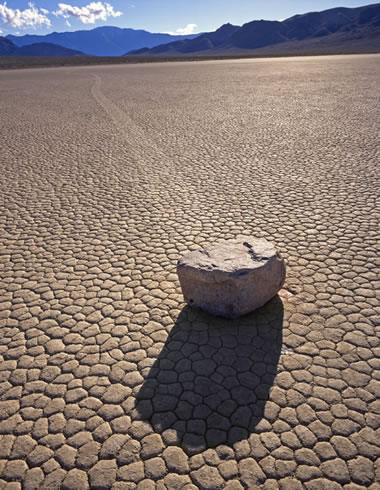 This rock is one that is easy to imagine sliding across the top of a slippery mud-cracked surface. Image copyright iStockphoto / Mike Norton.

Are They Moved by Ice?

Sometimes multiple neighboring rocks have trails that seem to have simultaneously change directions. These highly congruent trails on multiple rocks strongly support the "wind moving rocks embedded in an ice sheet" theory. One of the first reports that provided strong evidence of the rocks being moved this way is a 2006 video by Brian Dunning. 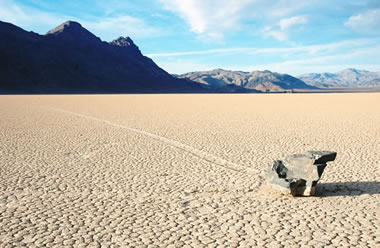 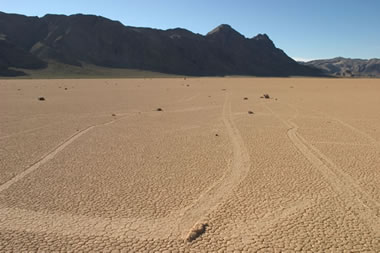 How the Mystery Was Solved!

Until 2013, all of the best explanations involved wind as the energy source and an ice sheet that captures enough wind energy to drag a six-hundred-pound rock across the surface of the playa. The big break in solving the mystery occurred in November 2013 when a lake up to three inches deep covered the playa and then froze. Researchers then observed many ice-embedded rocks moving slowly across the playa on several dates in December 2013 and January 2014. This evidence of the rocks in motion has been shared in a video by the Scripps Institution of Oceanography.

By February 2014 the lake had dried up, and new trails left by the recently-moved rocks could be seen in the playa sediment surface. Some of the rocks had been equipped with a small GPS recorder, and their records indicate that some rocks had moved over seven hundred feet during at least four episodes of movement.

This work demonstrated the movement of the rocks and attributed it to wind moving the rocks while they were embedded in a large ice sheet floating on a thin layer of water. Finally the mystery was solved! 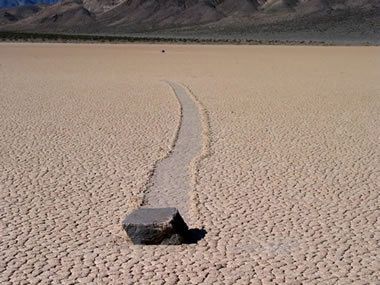 Photos of the "Sliding Rocks" !

Movement of a large rock across a barren surface is almost impossible to believe. Several good photos of large rocks and their trails by Steve Geer, Stephan Hoerold, David Choo, Skye Bajoul, sartriano, John Alcorn, and Mike Norton are posted on this page for those who are unable to travel to Death Valley National Park.