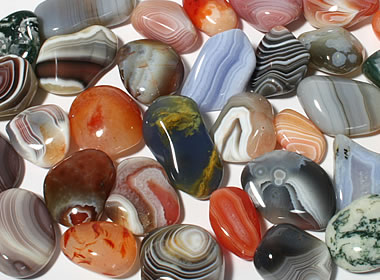 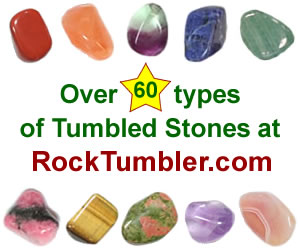 What Are Tumbled Stones?

Tumbled stones are small, rounded, brightly polished pieces of rocks and minerals. They are made by placing rough rocks in a machine known as a rock tumbler, which tumbles them until their edges and surfaces are smooth and polished. They are also known as "polished stones," "tumbled gems," "baroque gems," "polished rocks," and a variety of other names.

Many people enjoy tumbled stones because they are beautiful natural materials that have been given a pleasing shape and a bright polish. They are popular in jewelry, craft, souvenir, awards, collectibles, and New Age markets. Tumbled stones can be purchased by the pound at prices that just about everyone can afford. Their colorful appearance and interesting shapes have inspired many people to learn more about rocks, minerals, and gems. 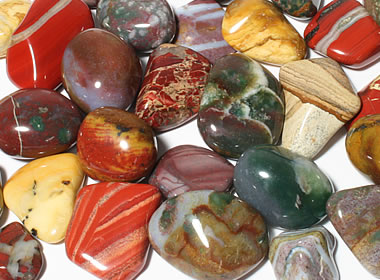 Tumbled jasper: Jasper is another type of rock that is a favorite of people who tumble stones. Shown in this photo are red jasper, brecciated jasper, picture jasper, yellow jasper, and more.

What Materials Are Used to Make Tumbled Stones?

The most popular materials used for making tumbled stones are attractive and colorful rocks and minerals that have a Mohs hardness between 5 and 8. These materials are generally durable and accept a good polish. Some of the most commonly tumbled materials are listed below. 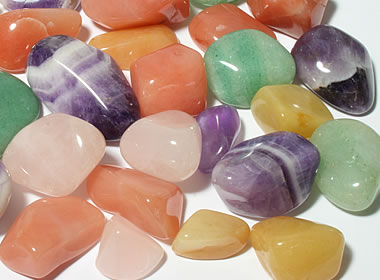 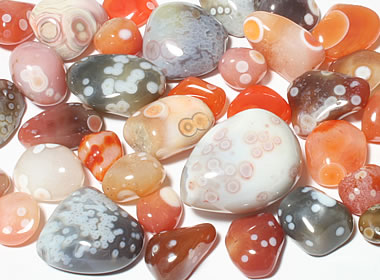 Tumbled eye agate: Some pieces of agate display concentric circles known as "eyes." These round markings are actually small hemispheres within the outer husk of the agate nodule. Most pieces of agate do not have "eyes," so stones that do have them are especially prized by collectors. 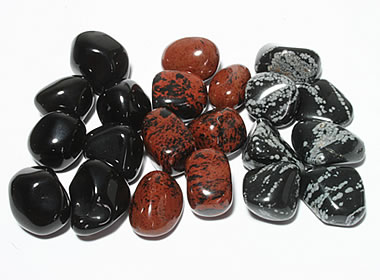 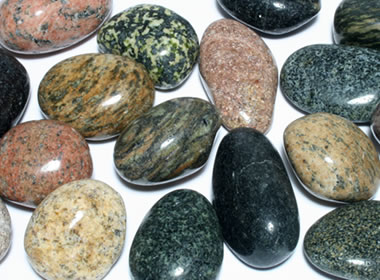 Tumbled igneous and metamorphic rocks: Some rocks will take a nice polish. Shown here are granite, basalt, gabbro, gneiss, and other types of rock collected from Ohio River sediments and sold as landscape stone. 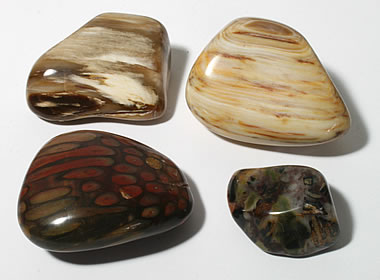 Petrified wood: Pieces of petrified wood can be tumble-polished to reveal wood grain and interesting patterns. 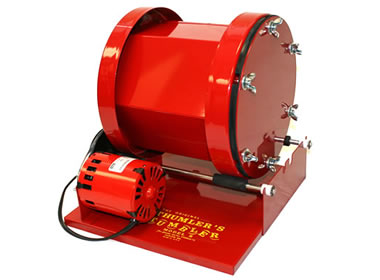 Hobbyist Rock Tumbler: The machine above is a Thumler's Model B rock tumbler. It is one of the better hobbyist grade tumblers, and it tumbles about ten pounds of rock. It has a metal barrel with a rubber liner. Many Model B rock tumblers have been in reliable use for decades. 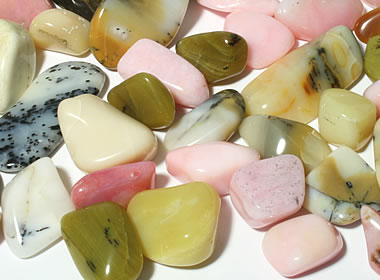 How Are Tumbled Stones Made?

Tumbled stones are made in a machine known as a rock tumbler. The most commonly used rock tumbler is a rotary machine that turns a barrel containing the stones, along with abrasive grit, and water, for days and weeks at a time. As the rocks tumble in the barrel, the grains of abrasive grit get caught between the rocks and abrade off sharp points and edges. This first step modifies the shape of the rocks and moves them towards a rounded shape. In two subsequent steps, smaller-size granules of silicon carbide are used to smooth the surfaces of the rocks in preparation for polishing. Then, in the final step, a rock polish such as micron-size aluminum oxide is used to produce a bright, lustrous, polished surface on the rocks. The tumbling process usually takes a few weeks to complete in a rotary tumbler.

Many people purchase rock tumblers to make tumbled stones as a hobby. Their tumblers range from inexpensive plastic machines that are usually loud and produce poorly-polished stones, to more durable metal machines with rubber barrels that are used by hobbyists. These machines usually tumble a few ounces to a few pounds of rock.

Commercial machines, used by companies who produce tumbled stones as a business, are large enough to tumble up to two or three tons of rock at a time. These companies purchase their rough rocks and supplies by the ton and are able to produce tumbled stones at low enough prices that they can be sold at retail for lower prices than the hobbyist can ever compete with. For that reason, people who want tumbled stones are usually best served by purchasing them rather than trying to buy the rocks and supplies that they need and producing them in a small tumbler. However, many people enjoy producing tumbled stones as a hobby, and some of them are fortunate enough that they live or travel in areas where they can collect the rocks that they tumble instead of buying them.

Uses of Tumbled Stones: Shown above are some of the many uses for tumbled stones.

How Are Tumbled Stones Used?

Tumbled stones are used for a wide variety of purposes. Each year a few thousand tons of tumbled stones are produced at commercial tumbling facilities, located in several different countries. They are then sold individually or by the pound or used to produce jewelry or items of decor. Depending upon the size of the stones and the material from which they are made, these stones are sold in the United States for prices that typically range from 50 cents per stone to $100 per pound. The most common types of stones sell for $10 to $20 per pound.

Here are a few ways that people like to use tumbled stones:

Many people like to use tumbled stones when they are practicing mindfulness, meditation, and spiritual healing techniques. 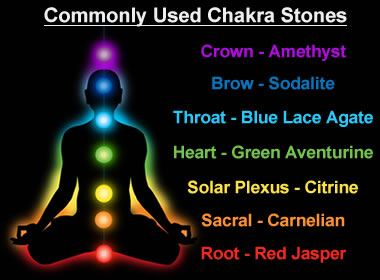 In some types of alternative medicine, stones are placed on the body at points of discomfort or on "spiritual centers" known as "chakras." Some people report relief from these treatments, although traditional medical research has not proven that any cure or healing occurs beyond a placebo effect. The treatments themselves are usually not harmful. However, some people use them instead of seeking genuine medical care as a serious medical condition progresses. 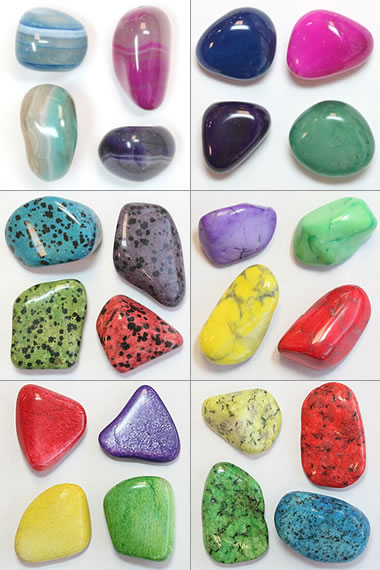 Many manufacturers treat tumbled stones with heat, dye, oil, or wax. These treatments can improve the appearance and marketability of the stones. Heat and dye can change the color of a stone. Oil and wax can conceal fractures, hide a bad polishing job, or make a smooth rough stone look like it has been polished.

Dying is possible because many tumbled stone materials are porous. This allows colored dye solutions to enter the stone and impart a bright color. Brightly colored stones are often easier to sell and many people like them. Dye is usually used on light-colored, inexpensive, noncommercial stones that can be tumbled in a short amount of time. These include: magnesite, diorite, granite, feldspar, and agate.

Dyed stones are often not colorfast. Some will lose their color with prolonged exposure to sunlight. Water-soluble dyes can transfer from a stone into water or onto hands, clothes, or other objects. Dyed stones usually fade if they are placed outdoors in exposed locations. Vendors who sell dyed stones should inform buyers to prevent disappointment. 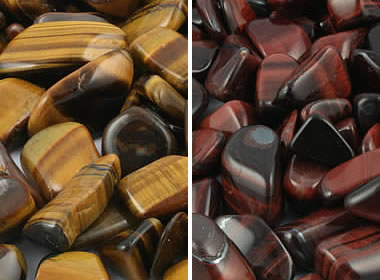 Many materials will change color upon heating. Gold tiger's-eye can turn red with heating. Amethyst can turn yellow, orange, gold, brown, or green with heating. These stones are then often sold as "citrine" or "prasiolite." Vendors who sell these stones should disclose the treatment because the "commercial identity" has changed.

Some light-colored agates will turn brown or orange with heating, or black if they are first soaked in a sugar solution. These are sometimes sold as "carnelian," "onyx," or "black chalcedony." These heat treatments are permanent, but buyers should be informed because the "commercial identity" of the stone has changed.

The heating process can also occur naturally. Agate, tiger's-eye, and amethyst are materials that sometimes form in volcanic landscapes. They can be heated if the rock units that contain them are overrun by a lava flow or if a magma body intrudes above or below. The altered identity of these stones is considered to be "natural." 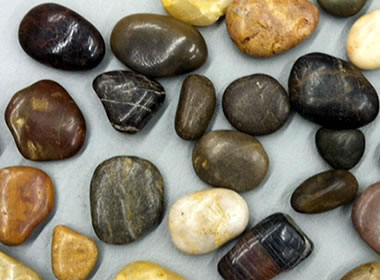 Waxed river stones: These stones were rounded and smoothed naturally by river water. People in China collected these stones and treated their surface with wax to make them look smooth and shiny. They were then marketed as "polished river stones" by a major retailer in the United States. Although many people would consider "waxing" the stones to be a "polishing," people who work in the lapidary industry would object because the wax only gave these stones the appearance of being polished. Waxing and a lapidary polishing would both be treatments to these stones - but they have different meanings to different people, and to some people the method is just as important as the outcome.

Some tumbled stones are waxed or oiled to give them a shiny appearance. Wax and oil can fill fractures or surface irregularities and give the stones a brighter luster. Wax or oil are sometimes applied to common river or beach stones to make them look like they have been polished. Waxes and oils usually wear off over time with handling or exposure to water, soap, or sunlight. These treatments are not permanent and should be disclosed by the vendor.