A bluish-green to greenish-blue feldspar mineral used as a gem. 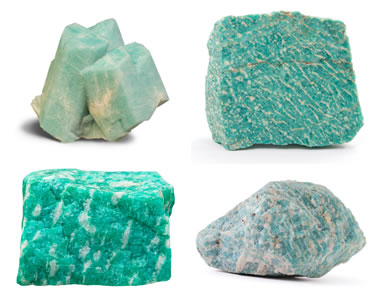 Amazonite Mineral Specimens: Four pieces of rough amazonite showing some of the various colors and patterns in which it can occur. Images copyright iStockphoto and (clockwise from top left) MarcelC, Yukosourov, Gala-Kan, and VvoeVale.

Amazonite is a trade name used for a green to bluish green to greenish blue gem material that is made into cabochons, beads, and tumbled stones. It is a color variety of microcline, a potassium-rich member of the feldspar mineral group. Amazonite has a chemical composition of KAlSi3O8 and its green color is thought to be caused by trace amounts of lead. 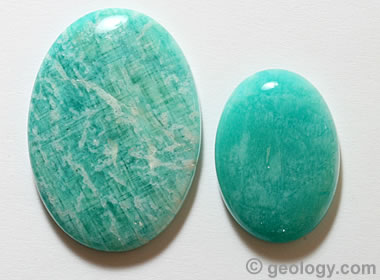 About the Name Amazonite

The gem was first named “Amazon stone”, after the Amazon River - although there are no known occurrences near that river. That name evolved into Amazonite, which sounds more appropriate for a gem or a mineral.

Some vendors attempted to make the gem sound a little more valuable by calling it “Amazon jade”. That type of name is a “misnomer”, a name that suggests a different (and usually more valuable) identity - in this case, jade.

Sellers who use misnomers to promote a product can face legal action from the Federal Trade Commission (FTC) or from their customers. “Yellow emerald” and “green amethyst” are misnomers that were addressed in recent FTC guides. 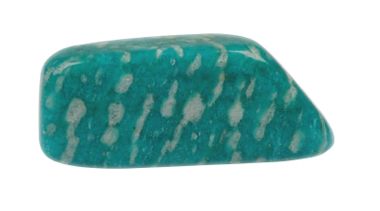 Amazonite has been used as a gem for over 2000 years. It has been found in archaeological excavations of ancient Egypt and Mesopotamia (an area that covered portions of present-day Iraq, Kuwait, Syria and Turkey). [1] [2]

Today, amazonite is rarely used to produce mass-market jewelry. It is rarely used because manufacturers have difficulty finding an adequate supply of gem material and because jewelry customers are not familiar with amazonite. Amazonite is occasionally seen in one-of-a-kind jewelry made by a designer who specializes in using unusual gems.

Amazonite is most popular in the craft and lapidary markets. To find it, try visiting a gem and mineral show, a rock shop, a crystal store, a lapidary show, or an online craft marketplace such as Etsy. These are places where the seller might be the same person who cut the gem and who made the item of jewelry.

Amazonite is also very popular in the New Age market, where gem materials are often used for their perceived healing or spiritual benefits. (The healing benefits of amazonite are anecdotal and have not been scientifically proven.)

Before you purchase or wear amazonite jewelry, you should know that it has two durability issues. First it has a Mohs hardness of 6 to 6.5. That allows it to be scratched by many objects that might be encountered during everyday wear. Amazonite is best used in earrings, pendants and pins. These are items of jewelry that encounter less abrasion and impact, compared to a ring or a bracelet.

The second durability issue is cleavage. Amazonite has two directions of perfect cleavage, and it can be easily broken in those directions if you bump your ring or bracelet against a hard object. Some jewelry makers set amazonite cabochons in a protective bezel. The bezel is designed to absorb the impact of blows from many angles. Protective bezels can greatly reduce the chances of breakage. If you know these things in advance, you can select and wear amazonite jewelry with less chance of disappointment. 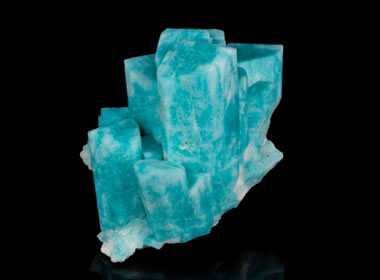 Amazonite Crystal Cluster: A cluster of nice amazonite crystals with a beautiful blue color from the Jack Rabbit Mine in Teller County, Colorado. The specimen measures 8.5 x 7.0 x 5.5 centimeters in size. Specimen and photo by Arkenstone / www.iRocks.com.

Amazonite is very colorful and often occurs in beautiful crystal clusters. That makes it extremely popular with mineral specimen collectors.

Some of the most popular amazonite specimens are from Teller County, Colorado, where amazonite crystals are often accompanied by large prismatic crystals of smoky quartz. Large artistic specimens often sell for thousands of dollars, but you can purchase small attractive specimens for more affordable prices. Amazonite often occurs with other interesting minerals such as albite feldspar, cleavelandite, quartz, and schorl tourmaline. Some collectors specialize in collecting specimens of amazonite with its associated minerals. 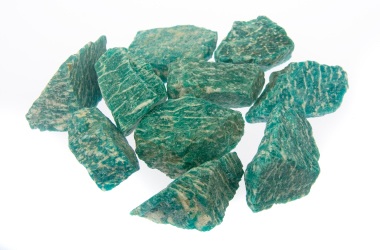 Well-formed crystals of amazonite are usually found in pegmatites, veins, and other cavities. These are underground places where mineral crystals can grow without obstructions. Amazonite granite is found in a few locations. It is sometimes mined and used as a dimension stone or an ornamental stone. Lapidary-size pieces of amazonite are sometimes found while mining pegmatite. These are used for cutting cabochons, making beads, or producing tumbled stones.