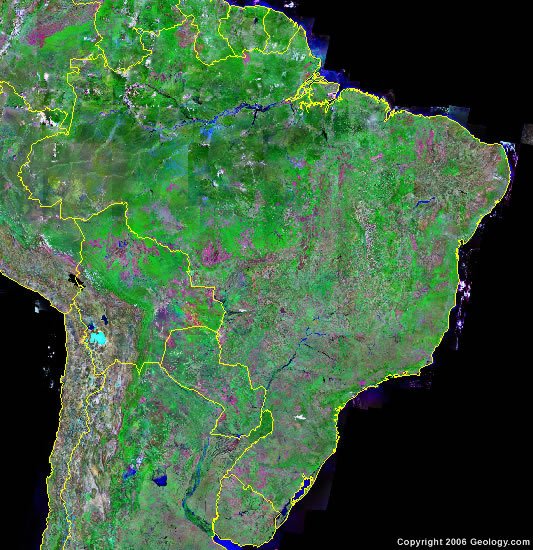 Google Earth is a free program from Google that allows you to explore satellite images showing the cities and landscapes of Brazil and all of South America in fantastic detail. It works on your desktop computer, tablet, or mobile phone. The images in many areas are detailed enough that you can see houses, vehicles and even people on a city street. Google Earth is free and easy-to-use.

Brazil on a World Wall Map:

Brazil is one of nearly 200 countries illustrated on our Blue Ocean Laminated Map of the World. This map shows a combination of political and physical features. It includes country boundaries, major cities, major mountains in shaded relief, ocean depth in blue color gradient, along with many other features. This is a great map for students, schools, offices and anywhere that a nice map of the world is needed for education, display, or decor.

Brazil On a Large Wall Map of South America:

If you are interested in Brazil and the geography of South America, our large laminated map of South America might be just what you need. It is a large political map of South America that also shows many of the continent's physical features in color or shaded relief. Major lakes, rivers, cities, roads, country boundaries, coastlines and surrounding islands are all shown on the map.

Brazil is the largest country in South America, the fifth-largest in the world, and the largest country with Portuguese as its official language. Brazil is also the most populous country in South America and the fifth most populous in the world. If you visit Brazil you can see Iguazu Falls, which if you combine the width of the 275 distinct falls, has the greatest width of any waterfall in the world at 8858 feet (2700 meters). The Amazon basin contains the world's largest rainforest and the world's largest and longest river. Brazil is also one of the world's most important sources of gemstones with impressive deposits of amethyst, topaz, agate, beryls, and tourmaline. 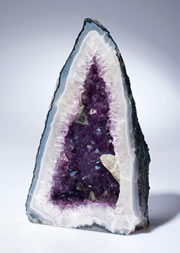 Brazil is one of the treasure chests of the world because it is an important or dominant source of so many gemstones. The state of Minas Gerais is the world's most important source of amethyst (in a wide range of color saturations) and topaz (in its most valuable colors). Brazil is a major source of gem beryls, which include morganite, aquamarine, and emerald. No other country produces more amethyst geodes and agate nodules than Brazil. In addition to amethyst, Brazil is also a major source of other quartz gems which include rock crystal, citrine, rose quartz, and smoky quartz. A full spectrum of tourmaline colors are produced in Brazil, including the most valuable Paraiba tourmaline, named after the state in which it was first found.

In the northeastern part of Brazil there are recurring droughts. Other natural hazards include floods, and occasional frost in the southern portion of the country.

The country of Brazil has water, air and soil pollution. The deforestation in the Amazon Basin destroys the habitat and endangers a large number of indigenous plant and animal species. There is water pollution and land degradation caused by improper mining activities. Wetland degradation and severe oil spills are also environmental concerns. Rio de Janeiro, Sao Paulo, and several other large cities have air and water pollution. The country of Brazil also has a problem with illegal poaching and wildlife trade.