A gemstone that occurs in a wide range of natural and treated colors.

Colored Topaz Crystals: A collection of topaz crystals of various natural colors - sherry, imperial, pink, and purple. Most topaz crystals are colorless. Most topaz in commercial jewelry has been heated, irradiated, or coated to improve its color. Specimens and photos by Arkenstone / www.iRocks.com

Topaz is a rare silicate mineral with a chemical composition of Al2SiO4(F,OH)2. It usually forms in fractures and cavities of igneous rocks such as pegmatite and rhyolite, late in their cooling history. It is also found as water-worn pebbles in stream sediments derived from those igneous rocks.

Topaz is also a well-known gemstone sold in a wide variety of attractive colors. Some of these colors are natural, while others are produced by treating pale or colorless topaz with heat, radiation, or metallic coatings.

Blue topaz is the most popular color in the market today. Most of it is produced by treatment. Many people like it because of its attractive color and low price.

Topaz is the original modern birthstone for the month of November. Its position as a birthstone contributes to the gem's popularity. Topaz jewelry can be found for sale in almost every jewelry store.

In 1952, Jewelers of America made a few modifications to the list of modern birthstones. That was when citrine, a yellow to orange to reddish brown variety of quartz, was added as a second birthstone for the month of November.

Topaz occurs in a wide range of colors. The most valuable colors for use in jewelry are natural pink, orange, red, purple and blue. These colors are very rare.

The most common natural colors are colorless, pale yellow, and brown. While these colors are not important for jewelry use in their natural state, they can be treated in a variety of ways to produce colors that are much more desirable.

When allowed to grow in an unrestricted cavity, topaz forms orthorhombic crystals, often with striations that parallel the long axis of the crystal. It also has a distinct basal cleavage that breaks to form vitreous fracture surfaces perpendicular to the long axis of the crystal. This cleavage makes topaz a more fragile gemstone than its hardness of 8 would imply. Topaz is very hard, but it is also brittle and cleaves easily.

Topaz has a specific gravity that ranges between 3.4 and 3.6. This is quite high for a mineral composed of aluminum, silicon, and gaseous elements. This high specific gravity causes it to be concentrated into placer deposits by stream currents. 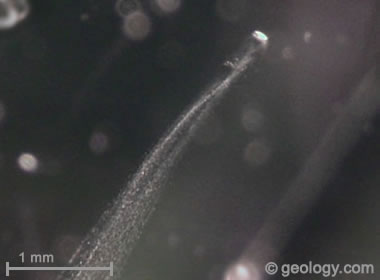 Comet Tail Inclusion in Topaz: It looks like a comet flying through a gemstone. Instead it is a tiny crystal of an unidentified mineral that started to grow on the surface of a much larger topaz crystal. The tiny crystal made it difficult for the topaz below it to grow properly - it had become an obstacle to growth. But, as the topaz crystal expanded, it pushed the tiny crystal in the direction of growth, and a wispy stream of inclusions within the topaz was the result.

What Color is Topaz?

Topaz occurs in a wide range of natural colors; however, most natural topaz is colorless. The most highly regarded colors are the reds and pinks, which receive their color from trace amounts of chromium. Chromium is also responsible for the color in violet and purple topaz.

A variety known as "imperial topaz" is especially valuable because people enjoy its reddish orange to orangy red colors, which often both occur in the same crystal. Most of the world's imperial topaz is found in Brazil. Topaz with a natural blue color is very rare and valuable.

Yellow, brown, and colorless topaz have lower values. These colors are often heated, irradiated, coated, and treated in other ways to alter their color.

Topaz Treatment Methods: Colorless topaz, also known as white topaz, (top left) can be irradiated and heated to produce gems with a blue color (top right). Irradiation alone can produce a pale pink color (bottom right). Coating with certain metallic oxides can produce a vivid pink color (bottom left). Most topaz in commercial jewelry today is colorless material that has been heated, irradiated, or coated to improve its color.

Use of Topaz as a Gemstone

The name "topaz" and many language variants have been used for yellowish gemstones for at least two thousand years. At that time yellowish gems were called "topaz" in many parts of the world. Many of the earliest gem traders did not realize that these yellowish stones were actually different materials.

Then, about two hundred years ago, people who traded in gems began to realize that these yellowish gems might be topaz, quartz, beryl, olivine, sapphire, or one of many other minerals. They also learned that topaz occurred in a wide range of colors other than yellow.

If you visited a jewelry store as recently as fifty years ago and asked to see topaz, you would likely have been shown gems that were in the color range of yellow, orange, and brown.

Starting in the 1970s and 1980s, the most common color that you would be shown began to be blue. This blue color was usually produced by treatments that converted colorless topaz into a more marketable gemstone.

"Mystic" Topaz: Some topaz is heated and then coated with a metallic oxide to change its color or to produce an iridescent effect. These treatments are sold under the trade name of "mystic topaz." These materials are simply clear topaz with a coating that might not be very durable.

Today most topaz offered in mall and department store jewelry stores at low to moderate prices has been treated in a laboratory. Colorless topaz can be heated, irradiated, and coated with thin layers of metallic oxides to alter its color.

Natural blue topaz is extremely rare and is usually pale blue. Almost all of the blue topaz offered in stores today is colorless topaz that has been irradiated and then heated to produce a blue color. "Swiss blue" and "London blue" are trade names for two of the most common varieties of treated blue topaz seen in today's market.

Natural pink to purple topaz is also extremely rare, but these colors can also be produced in a laboratory. The starting point is a stone cut from colorless topaz. It is first heated and then coated with a layer of metallic oxide to produce the pink color. If coated stones are worn in jewelry, over time the coating can wear thin or wear through at points on the stone where abrasion occurs.

Some topaz is coated with a metallic oxide that gives the stone a multicolored iridescent luster. These stones, known as "mystic topaz," appear to change color if the observer moves the stone under a light or changes the angle of observation. These coatings are also thin and can be worn through during normal wear.

Blue Topaz: Faceted ovals of two colors of blue topaz that are popular today. On the left is a "Swiss Blue" topaz weighing 2.02 carats. On the right is a "London Blue" weighing 2.26 carats. Both stones were colorless topaz mined in Brazil. After faceting they were irradiated and heated to produce the blue colors. Topaz with treated blue color is the most common color of topaz in commercial jewelry today.

The type of irradiation used to transform colorless topaz into blue topaz can cause the irradiated material to become slightly radioactive. Fortunately, the radioactivity level of the topaz begins to decline as soon as treatment is complete. It eventually declines to a level that is safe for the topaz to be handled during manufacturing and be sold to the public in jewelry.

In the United States, the Nuclear Regulatory Commission requires all irradiated gems and gem materials to be securely stored until their radioactivity decays to a level that is safe for manufacturing and sale. This is done to protect employees of the gem and jewelry industry and the jewelry-buying public.

All companies who distribute newly irradiated gems in the United States must be licensed by the Nuclear Regulatory Commission. They must also conduct radiological surveys of all materials in secure storage to be sure that no gems are released until their radioactivity declines to a level that will not pose any health risks.

The Nuclear Regulatory Commission has detailed information about irradiated topaz and other gemstones on their website. They also have answers to frequently asked questions. Two answers that we believe will be of interest to our readers are quoted in the box on this page. You can read the rest by visiting the NRC website.

Placer Topaz: Topaz has a high specific gravity, and because of that it is commonly concentrated by stream currents into placer deposits. Much topaz has been produced from placer deposits in Brazil and Nigeria. The topaz pebbles in the photo above are from Brazil and were rounded and frosted during stream transport.

Topaz has a chemical composition of Al2SiO4(F,OH)2. The fluorine in its composition is a limiting factor on its formation. Fluorine gas in concentrations high enough to form minerals only occurs in a few geologic environments.

Most topaz grows as crystals within the veins and voids of igneous rocks. This topaz is found in the cavities of a pegmatite, or in the vesicles and intergranular spaces of rhyolite. These topaz crystals grow during the late stages of magma cooling and while degassing releases the fluorine necessary for topaz crystal growth.

Topaz is also found as water-worn pebbles in stream sediments derived from the weathering of pegmatites and rhyolites. These are often produced by placer mining.

Brazil has been the world's most important source of topaz for decades. Almost all of the world's fine-quality imperial topaz is produced in the state of Minas Gerais in southeastern Brazil. The Ouro Preto and Capao mines have been the most important sources of yellow, orange, pink, red and violet topaz crystals for the gem and mineral specimen markets. Brazil is also the leading producer of colorless topaz, much of which is heat treated and irradiated to produce the colors of Swiss blue and London blue.

Pakistan is a smaller but noteworthy source of pink, red and violet topaz. Sri Lanka is a very important source of colorless topaz. Other sources of topaz include: Australia, India, Madagascar, Mexico, Myanmar, Namibia, Nigeria, Russia, and Zimbabwe. In the United States, some topaz is produced in Utah, where it was named the state gemstone in 1969.