Utah is a source for many beautiful and interesting gems. 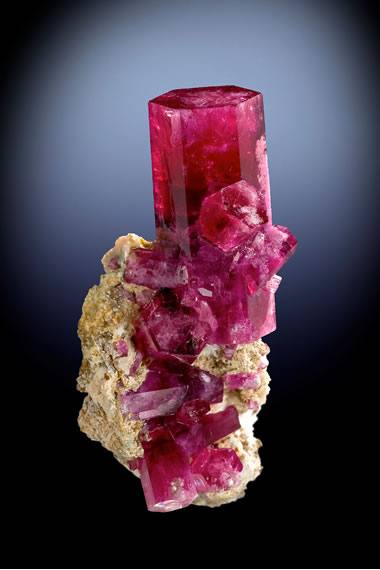 Red Beryl: Photograph of an impressive specimen of red beryl collected from the Harris Claim in the Wah Wah Mountains of Utah. This crystal is approximately two inches long. Specimen and photo by Arkenstone / www.iRocks.com.

The Most Interesting Gems in the U.S.

Utah might win the prize for having the most interesting gemstones in the United States. Utah produces a red gem that is more rare and more costly than diamond, inexpensive gemstones named "Tiffany" and "Picasso", gems made from dinosaur bone, and a unique gem material called "wonderstone"... and that is just a sampling. 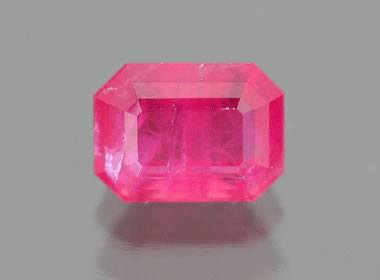 Faceted Red Beryl: The photo above shows a faceted red beryl with a beautiful medium red color. It measures about 5.2 x 3.9 millimeters in size. From the Wah Wah Mountains of Utah. Photo by TheGemTrader.com.

Red beryl is one of the world's rarest gemstones. It is found in a few locations in the Thomas Range and the Wah Wah Mountains of Utah. It is also found in the Black Range of New Mexico. The crystals are generally small, often too small to facet. High-quality rough that is large enough to facet can produce finished stones that sell for as much as $2,000 per carat.

The host rock for red beryl is usually a rhyolitic lava flow. The mineral is thought to form after the lava has cooled into rhyolite and beryllium-rich gases move upwards through shrinkage cracks. Descending groundwater carrying essential elements from above meets the gases, and crystallization occurs.

Beryllium rarely occurs in large enough quantities to produce minerals, and the conditions needed to produce a red color rarely occur. This coincidence of two rare events is why red beryl is found in just a few places on Earth.

Red beryl has also been called "bixbite" and "red emerald". The name "bixbite" is after Maynard Bixby, who first discovered the gem. The name "red emerald" is widely rejected as inappropriate because it causes confusion with emerald, which is by definition the green variety of beryl. Red beryl is the most appropriate name. 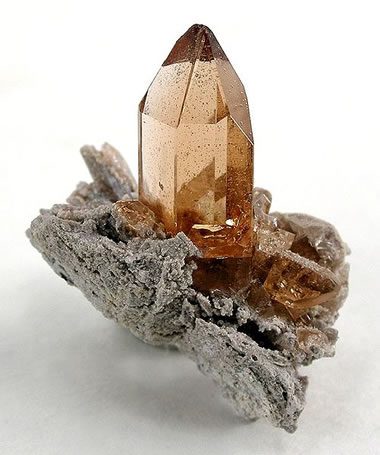 Utah Topaz: Photograph of a beautiful topaz crystal collected from Maynard's Claim in the Thomas Range of western Utah. This crystal is approximately one inch long and rests on a piece of rhyolite. Specimen and photo by Arkenstone / www.iRocks.com.

The Thomas Range of western Utah is also one of the world's best sources of topaz. Cavities in the Topaz Mountain Rhyolite often contain topaz crystals with a beautiful amber color.

Topaz crystals are also found in soils and dry washes around Topaz Mountain. These crystals are usually colorless because the amber color can be lost through prolonged exposure to direct sunlight. A few specimens fade to a beautiful pink color.

Topaz is a popular gemstone around the world and especially in Utah. The Utah Legislature named topaz the state gemstone in 1969. This has increased the local popularity of topaz and has made topaz jewelry an important item in the state's tourist trade. 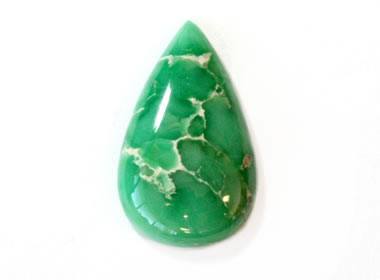 Utah Variscite: A teardrop-shaped cabochon cut from variscite collected near Fairfield, Utah. This specimen is about 27x16 millimeters in size and weighs about 12.5 carats.

Variscite is a beautiful yellow-green to deep green to blue-green material that often has interesting matrix similar to turquoise. Some people have confused it with turquoise, but it is generally softer and has a lower specific gravity. It is often cut into cabochons and small sculptures. It is soft, with a hardness of only about 4.5 on the Mohs Scale. That makes variscite suitable for pendants, pins, earrings, and other jewelry that will not be subjected to abrasion or impact.

Variscite is an aluminum phosphate mineral that is found in a few locations in Utah. It is a secondary mineral found as nodules, fractures, and other cavity fillings, often in igneous rock. Important Utah localities are near the communities of Lucin and Fairfield. 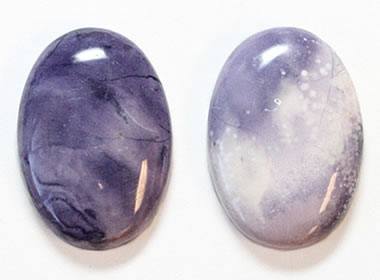 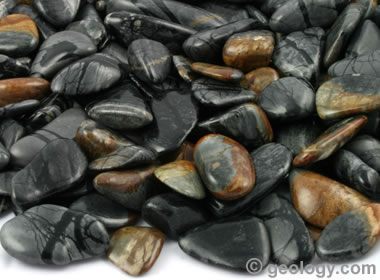 Utah Picasso Stone: Picasso Stone is a marble that is capable of accepting a bright polish. It was named "Picasso Stone" after the artist, Pablo Picasso, because it has an abstract appearance. It is commonly used to produce beads, tumbled stones, and interesting cabochons.

Two really interesting Utah gemstones have the same names as a famous artist and a famous design house.

"Picasso Stone" is a marble that has brown, gray, and black markings that remind people of abstract art. That is how it earned its name - it was named after Pablo Picasso, the famous artist. Picasso stone is a soft material suitable for jewelry and ornamental uses that will not be subject to abrasion. It is used to make tumbled stones, beads, cabochons, and many other gem and ornamental items.

"Tiffany Stone" is a beautiful purple, blue and white rock composed mainly of fluorite, but might also contain opal, calcite, dolomite, quartz, chalcedony, and bertrandite. It is mined at just one location in the world - the Brush Wellman beryllium mine in the Spor Mountains of western Utah. It can be cut into beautiful cabochons, beads and other items. Unfortunately, the name of this stone has nothing to do with Tiffany & Co., the famous design house. 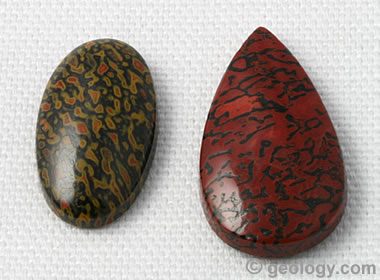 Dinosaur Bone from Utah: Dinosaur bone is often fossilized in a way that infills the cavities and replaces the cell walls with different colors of chalcedony. Solid material without voids or fractures can be cut into extremely colorful and interesting cabochons. These two cabochons show the infilled cell cavities in a green and red color with black cell walls. These beautiful dino bone cabs are by Tom Wolfe of Wolfe Lapidary.

Dinosaur bone is a novelty gem that has been found in many locations in Utah. To be suitable for gem cutting, the bone must be completely petrified, with the cell cavities being completely infilled and the cell walls completely replaced by chalcedony. That enables the cutter to produce a gem without unsightly pits and cavities.

Dinosaur bone can be found in a variety of colors that include brown, yellow, red, green, orange, and black. The most attractive specimens have a high color contrast between the material in the cavities and walls. It is a very popular gem for men's jewelry such as bolos, cuff links, and rings.

There are very strict rules for collecting dinosaur bone and other fossil materials. Know how they apply to any location where you are looking for rocks, gems, minerals, and fossils. 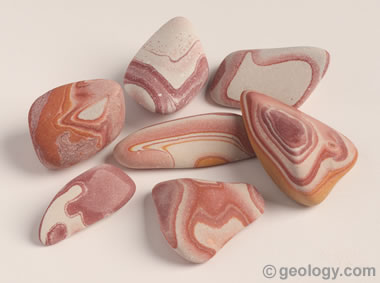 Wonderstone from Utah: Shown here are some pieces of tumbled wonderstone. Since wonderstone has a Mohs hardness of 6, it shapes quickly in a rock tumbler. However, the composition of this material is variable. Some of it will polish to a bright, shiny finish, but much of it will produce what people would describe as a soft satin or matte finish. Many people enjoy the soft luster and interesting patterns that are characteristic of this material.

Wonderstone is a welded-vitric tuff with a composition similar to rhyolite. It forms during explosive eruptions when molten rock material is ejected and sticks together upon landing. If it is buried by overlying ejecta while still hot, it will become compacted into a solid glassy material.

The welded tuff that is known as "wonderstone" has been stained by dissolved minerals in groundwaters that flow through the rock long after deposition. Iron oxides in the water stain the tuff to various shades of yellow, orange, brown, red, and maroon. The stains can form concentric bands between water-conducting fractures and other patterns that lead to the name of "wonderstone." A photo of a few wonderstone specimens is shown on this page.

To be useful for lapidary purposes, the wonderstone must be completely vitrified without a grainy, porous texture. Quite a bit of wonderstone has a great appearance but falls short of lapidary grade because of this texture. Inspect closely when buying or collecting.

Nice wonderstone can be used to make great cabochons and polished stones in a rock tumbler. Since it is made of feldspar with a Mohs hardness of about 6, it cuts quickly on the diamond or silicon carbide wheel, but can be easily scratched when used in jewelry items that receive rough wear.

Many other gem materials are found in Utah. The state produces a fantastic variety of agates and jaspers and petrified woods. Facetable garnet and amethyst are also found in Utah.