Beryllium is a strategic and critical material used in many products essential for national security. 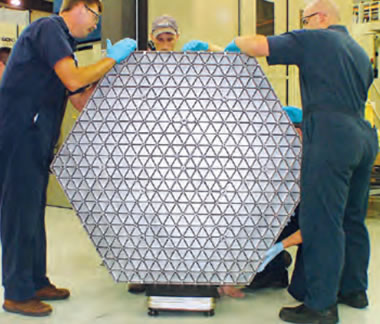 Beryllium telescope mirror: View of the back of one of the 18 beryllium mirror segments for the James Webb Space Telescope. The ribs at the back of the mirror help to maintain the mirror's strength and ability to hold its shape under extreme conditions. The front of the mirror is completely smooth and coated in a thin film of gold. Photograph courtesy of the National Aeronautics and Space Administration. Photo courtesy of NASA.

A Strategic and Critical Metal

Beryllium is one of the lightest and stiffest metals, but there was little industrial demand for it until the 1930s and 1940s when the aerospace, defense, and nuclear sectors began using beryllium and its compounds. Beryllium is now classified by the U.S. Department of Defense as a strategic and critical material because it is used in products that are vital to national security.

Beryllium-copper alloys account for approximately 80 percent of the beryllium used in the United States. These alloys are strong, hard, and nonmagnetic; they are good conductors of electricity and heat, and they resist corrosion and fatigue. Beryllium alloys are used in making connectors, springs, switches, and other components of electronic and electrical devices for aerospace, automobile, computer, defense, medical, telecommunications, and other products. 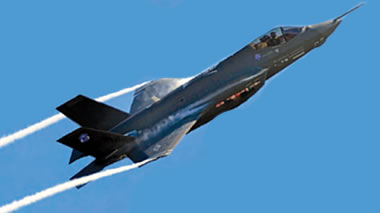 Beryllium in aerospace: The U.S. Air Force F-35 Lightning II Joint Strike Fighter and many other aerospace vehicles rely on electrical and mechanical components made of beryllium alloys. Photo courtesy of the U.S. Air Force.

Beryllium metal is very light and very stiff. On a weight-to-weight basis, beryllium is six times stiffer than steel, and it maintains its shape at high and low temperatures. Beryllium metal is used in the aerospace and defense industries to make lightweight precision instruments.

The mirrors of the Spitzer Space Telescope and the James Webb Space Telescope (JWST), which is scheduled for launch in 2021, are made of beryllium. The primary mirror of the JWST contains 18 hexagonal segments (each segment is 4.3 feet in diameter) that must maintain their exact shape even at temperatures of -400 degrees Fahrenheit and must be light enough to be carried into orbit; the telescope will operate approximately 1 million miles above Earth.

Beryllium is almost transparent to x-rays, and beryllium foil is used as window material in x-ray and other radiation machines. In nuclear reactors, beryllium metal and beryllium oxide are used to control fission reactions. Beryllium has also been used in the trigger mechanisms for nuclear weapons. 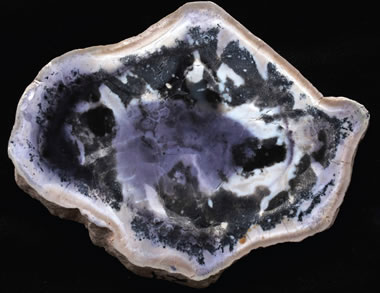 Bertrandite Nodule: Much of the bertrandite found at Spor Mountain, Utah is contained in nodules composed of fluorite, opal and bertrandite. The beryllium is concentrated in the outer opalized fluorite zone. Nodules like this can contain up to 1% beryllium by weight. Photograph by David A. Lindsey, United States Geological Survey.

Where Does Beryllium Come From?

Two minerals, bertrandite and beryl, are mined for beryllium, and both are found in association with igneous rocks. All the beryllium currently being mined in the United States comes from the mineral bertrandite.

A complex series of events must take place to concentrate beryllium into bertrandite. First, a magma that is rich in fluorine, beryllium, and silica must erupt in an area where there are carbonate rocks (limestone or dolomite). If heat from the magma warms the groundwater in the area and causes the water to move through the surrounding rocks, the water picks up elements, including beryllium, from those rocks; the water may then react with suitable igneous or sedimentary rocks to crystallize minerals, including bertrandite. 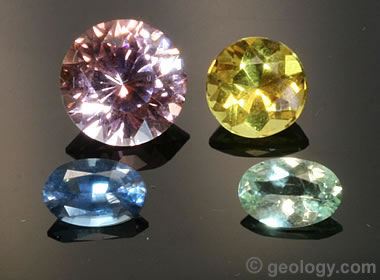 The mineral beryl is the main source of beryllium mined outside the United States. Beryl is most often found in veins or pegmatites, which are rocks that contain the last minerals to crystallize from a large igneous intrusion. Pegmatites are distinguished by large interlocking crystals that often include unusual elements and minerals.

Pure beryl crystals are colorless, but the inclusion of other elements in beryl creates colorful, valuable gemstones. The green color in emerald is due to traces of chromium and sometimes vanadium in the beryl crystal lattice. The pale blue to blue-green color of aquamarine is caused by iron atoms with an oxidation state of +2 (Fe2+); other elements in beryl crystals produce colors that range from gold to red. America's largest faceted emerald, a 64-carat gemstone, was cut from a 310-carat dark green crystal found at the Adams Emerald Mine in North Carolina in 2009. 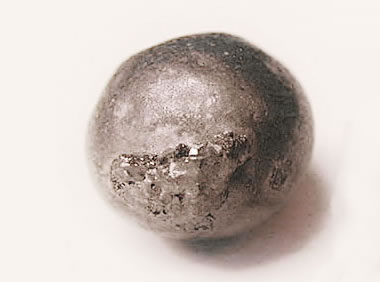 Bertrandite Metal: A marble-sized bead of beryllium. Photograph by NASA.

The United States is the world's leading source of beryllium. A single mine at Spor Mountain, Utah, produced more than 85 percent of the beryllium mined worldwide in 2010. China produced most of the remainder, and less than 2 percent came from Mozambique and other countries. National stockpiles also provide significant amounts of beryllium for processing.

Three countries-China, Kazakhstan, and the United States-process beryllium ore. In 2005, the U.S. Department of Defense began a partnership with a private-sector company to build a new processing facility in Ohio to produce high-purity beryllium metal. The processing facility was completed in 2011, and up to two-thirds of its output was to be allocated for defense and other Government-related end uses.

The United States imported approximately 34 percent of the beryllium raw materials it used in 2011, including beryllium metal and other processed beryllium materials used in manufacturing; two-thirds of this material came from Russia and Kazakhstan.

Beryllium that is recycled from scrap left over from the manufacture of beryllium-bearing products may provide approximately 10 percent of U.S. apparent consumption. Apparent consumption is a measure of the amount of a material that is actually used, calculated as production + imports - exports ± changes in Government or industry stocks.

The United States is likely to be able to meet most of its beryllium requirements from domestic sources. There are substantial proven reserves of bertrandite at Spor Mountain, Utah, and there are beryllium resources in other areas of Utah and Alaska. Approximately 65 percent of the estimated global resources of nonpegmatitic beryllium is located in the United States. The U.S. Department of Defense aims to hold approximately 45 metric tons of hot-pressed beryllium metal powder in the National Defense Stockpile.

To help predict where future beryllium supplies might be located, USGS scientists study how and where beryllium resources are concentrated in Earth's crust and use that knowledge to assess the likelihood that undiscovered beryllium resources may exist. Techniques to assess mineral resources have been developed by the USGS to support the stewardship of Federal lands and to better evaluate mineral resource availability in a global context. The USGS also compiles statistics and information on the worldwide supply of, demand for, and flow of beryllium. These data are used to inform U.S. national policymaking.