A sedimentary rock similar to limestone. Also known as "dolostone" and "dolomite rock." 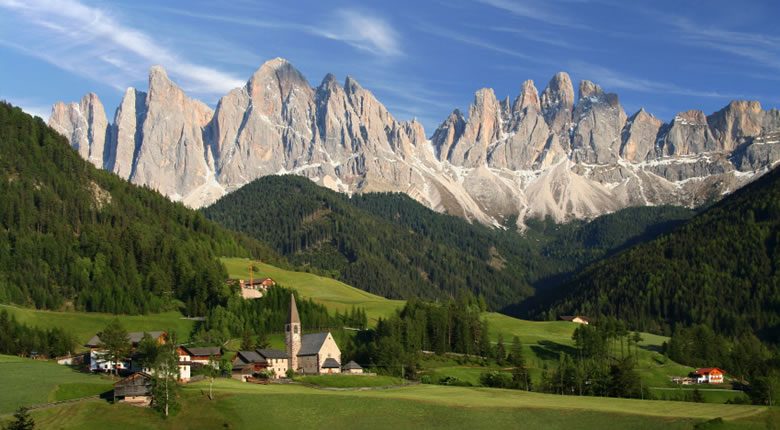 "The Dolomites" are a mountain range in northeastern Italy and part of the Italian Alps. They are one of the largest exposures of dolomite rock on Earth - from which the name is obtained. The Dolomites are a UNESCO World Heritage Site. Image copyright iStockphoto / Dan Breckwoldt. 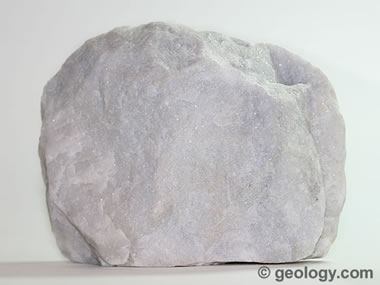 Dolomite rock: A specimen of fine-grained dolomite rock from Lee, Massachusetts. It is about four inches (ten centimeters) across.

Dolomite, also known as "dolostone" and "dolomite rock," is a sedimentary rock composed primarily of the mineral dolomite, CaMg(CO3)2. Dolomite is found in sedimentary basins worldwide. It is thought to form by the postdepositional alteration of lime mud and limestone by magnesium-rich groundwater.

Dolomite and limestone are very similar rocks. They share the same color ranges of white-to-gray and white-to-light brown (although other colors such as red, green, and black are possible). They are approximately the same hardness, and they are both soluble in dilute hydrochloric acid. They are both crushed and cut for use as construction materials and used for their ability to neutralize acids.

Dolomite is very common in the rock record, but the mineral dolomite is rarely observed forming in sedimentary environments. For this reason it is believed that most dolomites form when lime muds or limestones are modified by postdepositional chemical change.

Dolomite originates in the same sedimentary environments as limestone - warm, shallow, marine environments where calcium carbonate mud accumulates in the form of shell debris, fecal material, coral fragments, and carbonate precipitates. Dolomite is thought to form when the calcite (CaCO3) in carbonate mud or limestone is modified by magnesium-rich groundwater. The available magnesium facilitates the conversion of calcite into dolomite (CaMg(CO3)2). This chemical change is known as "dolomitization." Dolomitization can completely alter a limestone into a dolomite, or it can partially alter the rock to form a "dolomitic limestone." 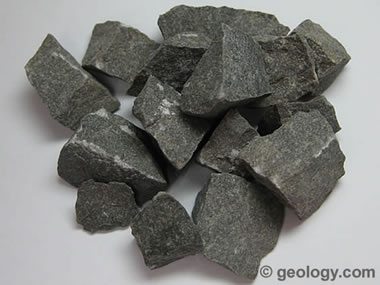 Identification in the Field and Classroom

Dolomite is slightly harder than limestone. Dolomite has a Mohs hardness of 3.5 to 4, and limestone (composed of the mineral calcite) has a hardness of 3.

These differences are often not significant enough to make a positive identification in the field. Distinguishing the rocks in the field is further complicated by a compositional continuum that ranges from limestone to dolomitic limestone to dolomite. A chemical analysis that determines the relative abundances of calcium and magnesium is needed to accurately name the rocks. 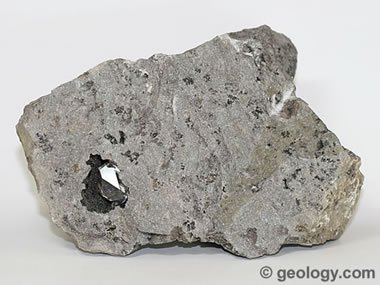 Dolostone: Photograph of a specimen of the Little Falls Dolostone from Herkimer County, New York. This dolostone is the host rock for the doubly-terminated quartz crystals known as "Herkimer Diamonds." It is vuggy, has a high silica content, and is much harder and tougher than the typical dolomite. The Herkimer Diamonds are found in petroleum-lined vugs in the rock unit. Part of a Herkimer Diamond is visible in the large vug on the left side of this specimen. 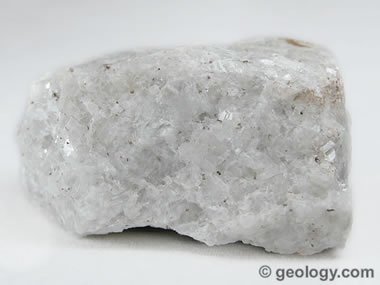 Granular dolomite: A specimen of coarsely crystalline dolomitic marble from Thornwood, New York. This specimen is approximately 3 inches (6.7 centimeters) across.

Dolomite behaves like limestone when it is subjected to heat and pressure. It begins to recrystallize as the temperature rises. As this occurs, the size of the dolomite crystals in the rock increases, and the rock develops a distinctly crystalline appearance.

If you examine the photo of granular dolomite, you will see that the rock is composed of easily recognizable dolomite crystals. The coarse crystalline texture is a sign of recrystallization, most often caused by metamorphism. Dolomite that has been transformed into a metamorphic rock is called "dolomitic marble." 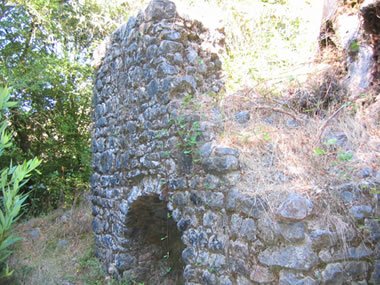 Lime kiln: Dolomite and limestone have been heated in kilns to produce lime for thousands of years. This stone structure is the Olema Lime Kiln, located in Marin County, California. It was built in 1850 for the production of lime. National Park Service photo.

Dolomite and limestone are used in similar ways. They are crushed and used as an aggregate in construction projects. They are kiln-fired in the manufacture of cement. They are cut into blocks and slabs for use as a dimension stone. They are calcined to produce lime. In some of these uses, dolomite is preferred. Its greater hardness makes it a superior construction material. Its lower solubility makes it more resistant to the acid content of rain and soil.

The dolomitization process results in a slight volume reduction when limestone is converted into dolomite. This can produce a porosity zone in the strata where dolomitization has occurred. These pore spaces can be traps for subsurface fluids like oil and natural gas. This is why dolomite is often a reservoir rock that is sought in the exploration for oil and natural gas. Dolomite can also serve as a host rock for lead, zinc, and copper deposits.