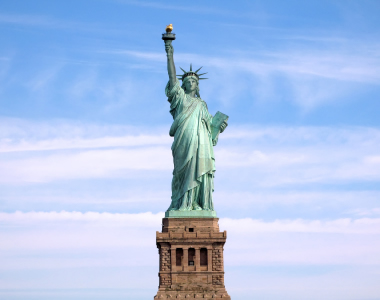 Statue of Liberty: In 1886, the Statue of Liberty represented the largest use of copper in a single structure. To build the statue, about 80 tons of copper sheet was cut and hammered to a thickness of about 2.3 millimeters (3/32 inch), or about that of two U.S. pennies placed together. Photo copyright iStockphoto / A. Harris.

Copper - A Metal Used Through The Ages

Copper was one of the first metals ever extracted and used by humans, and it has made vital contributions to sustaining and improving society since the dawn of civilization. Copper was first used in coins and ornaments starting about 8000 B.C., and at about 5500 B.C., copper tools helped civilization emerge from the Stone Age. The discovery that copper alloyed with tin produces bronze marked the beginning of the Bronze Age at about 3000 B.C.

In the United States, a piece of what is believed to be a copper bracelet was found in a Native American burial on the coastal plain of Georgia in 2017. The burial was a cremation dated to roughly 3500 years ago. The copper contained trace elements that linked it to geological deposits in the Great Lakes region. These discoveries suggest a long-distance trade connection between Georgia and the Great Lakes region, a greater distance than was ever known before. [7]

Copper is easily stretched, molded, and shaped; is resistant to corrosion; and conducts heat and electricity efficiently. As a result, copper was important to early humans and continues to be a material of choice for a variety of domestic, industrial, and high-technology applications today.

Uses of Copper: This graph shows how copper was used in the United States during 2019 by industry sector. As an example: copper used in building construction could have been used for wiring, plumbing, weatherproofing and many other individual types of use. Data for this chart is from the United States Geological Survey Mineral Commodity Summary for 2020.

How Do We Use Copper Today?

Presently, copper is used in building construction, power generation and transmission, electronic product manufacturing, and the production of industrial machinery and transportation vehicles. Copper wiring and plumbing are integral to the appliances, heating and cooling systems, and telecommunications links used every day in homes and businesses. Copper is an essential component in the motors, wiring, radiators, connectors, brakes, and bearings used in cars and trucks. The average car contains 1.5 kilometers (0.9 mile) of copper wire, and the total amount of copper ranges from 20 kilograms (44 pounds) in small cars to 45 kilograms (99 pounds) in luxury and hybrid vehicles. 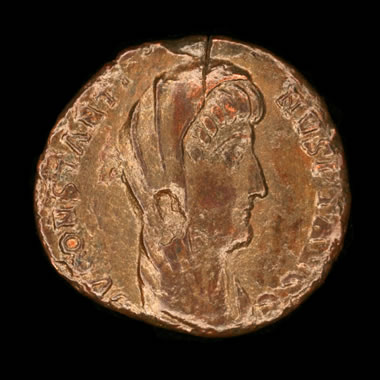 Roman coin: Copper was one of the first metals used to make coins, and that practice began in about 8000 BC. The coin shown above is a Roman follis featuring an image of Constantius I. Photo copyright iStockphoto / craetive.

As in ancient times, copper remains a component of coinage used in many countries, but many new uses have been identified. One of copper's more recent applications includes its use in frequently touched surfaces (such as brass doorknobs), where copper's antimicrobial properties reduce the transfer of germs and disease. Semiconductor manufacturers have also begun using copper for circuitry in silicon chips, which enables microprocessors to operate faster and use less energy. Copper rotors have also recently been found to increase the efficiency of electric motors, which are a major consumer of electric power. 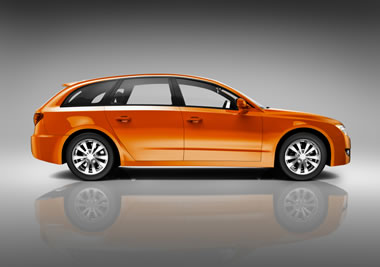 Copper in automobiles: Copper is an essential component in the motors, wiring, radiators, connectors, brakes, and bearings used in cars and trucks. The average car contains 1.5 kilometers (0.9 mile) of copper wire, and the total amount of copper ranges from 20 kilograms (44 pounds) in small cars to 45 kilograms (99 pounds) in luxury and hybrid vehicles. Photo copyright iStockphoto / Rawpixel.

The excellent alloying properties of copper have made it invaluable when combined with other metals, such as zinc (to form brass), tin (to form bronze), or nickel. These alloys have desirable characteristics and, depending on their composition, are developed for highly specialized applications. For example, copper-nickel alloy is applied to the hulls of ships because it does not corrode in seawater and reduces the adhesion of marine life, such as barnacles, thereby reducing drag and increasing fuel efficiency. Brass is more malleable and has better acoustic properties than pure copper or zinc; consequently, it is used in a variety of musical instruments, including trumpets, trombones, bells, and cymbals. 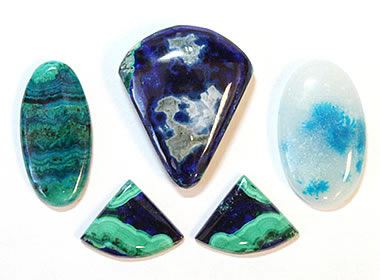 Copper in gemstones: Copper is an important element in a number of gemstones such as turquoise, azurite, malachite and chrysocolla. It gives these minerals their green or blue color and their high specific gravity. The cabochons shown above are some of the many gemstones mined in Arizona.

Research designed to better understand the geologic processes that produce mineral deposits, including copper deposits, is an important component of the USGS Mineral Resources Program. Copper deposits are broadly classified on the basis of how the deposits formed. Porphyry copper deposits, which are associated with igneous intrusions, yield about two-thirds of the world's copper and are therefore the world's most important type of copper deposit. Large copper deposits of this type are found in mountainous regions of western North America and in the Andes Mountains of South America.

Another important type of copper deposit - the type contained in sedimentary rocks - accounts for approximately one-fourth of the world's identified copper resources. These deposits occur in such areas as the copper belt of central Africa and the Zechstein basin of Eastern Europe.

Individual copper deposits may contain hundreds of millions of tons of copper-bearing rock and commonly are developed by using open-pit mining methods. Mining operations, which usually follow ore discovery by many years, often last for decades. Although many historic mining operations were not required to conduct their mining activities in ways that would reduce their impact on the environment, current Federal and State regulations do require that mining operations use environmentally sound practices to minimize the effects of mineral development on human and ecosystem health.

USGS mineral environmental research helps characterize the natural and human interactions between copper deposits and the surrounding aquatic and terrestrial ecosystems. Research helps define the natural baseline conditions before mining begins and after mine closure. USGS scientists are investigating climatic, geologic, and hydrologic variables to better understand the resource-environment interactions.

Copper mining in Arizona: Arizona produces more copper than any other state. This brief history shows how Arizona's copper mining built a state and changed a nation.

The world's production (supply) and consumption (demand) of copper have increased dramatically in the past 25 years. As large developing countries have entered the global market, demand for mineral commodities, including copper, has increased. In the past 20 years, the Andean region of South America has emerged as the world's most productive copper region. In 2007, about 45 percent of the world's copper was produced from the Andes Mountains; the United States produced 8 percent. Virtually all copper produced in the United States comes from, in decreasing order of production, Arizona, Utah, New Mexico, Nevada, or Montana.

The risk of disruption to the global copper supply is considered to be low because copper production is globally dispersed and is not limited to a single country or region. Because of its importance in construction and power transmission, however, the impact of any copper supply disruption would be high.

Copper is one of the most widely recycled of all metals; approximately one-third of all copper consumed worldwide is recycled. Recycled copper and its alloys can be remelted and used directly or further reprocessed to refined copper without losing any of the metal's chemical or physical properties. 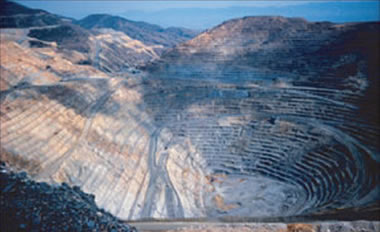 Utah copper mine: Visible from space, the Bingham Canyon copper mine in Utah has produced more than 12 million tons of porphyry copper. The mine is more than 4 kilometers (2.5 miles) across at the top and 800 meters (0.5 mile) deep and is one of the engineering wonders of the world. Photograph by C.G. Cunningham, USGS.


How Do We Ensure Adequate Supplies of Copper for the Future? 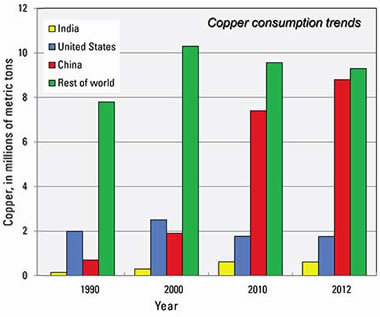 This study considered potential for exposed and concealed deposits within 1 kilometer of the surface for porphyry deposits and up to 2.5 kilometers of the surface for sediment-hosted stratabound deposits. For porphyry deposits, 175 tracts were delineated; 114 tracts contain 1 or more identified deposits. Fifty tracts were delineated for sediment-hosted stratabound copper deposits; 27 contain 1 or more identified deposits.

Results of the assessment are provided by deposit type for 11 regions (see Copper Deposit Map on this page). The mean total undiscovered resource for porphyry deposits is 3,100 million tons, and the mean total undiscovered resource for sediment-hosted deposits is 400 million tons, for a global total of 3,500 million tons of copper. The ranges of resource estimates (between the 90th and 10th percentiles) reflect the geologic uncertainty in the assessment process. Approximately 50 percent of the global total occurs in South America, South Central Asia and Indochina, and North America combined.


South America has the largest identified and undiscovered copper resources (about 20 percent of the total undiscovered amount). The world's largest porphyry deposits are mined in this region. Chile and Peru are among the world's top copper-producing countries.

Central America and the Caribbean host two undeveloped giant (>2 million tons copper) porphyry copper deposits in Panama. Most of the undiscovered resources are in a belt that extends from Panama to southwestern Mexico.

The leading copper-producing states in the U.S.A. are Arizona, Utah, New Mexico, Nevada, and Montana. In the United States, undiscovered sediment-hosted stratabound copper deposits in Michigan, Montana, and Texas are estimated to contain about three times as much copper as has been identified. Two giant deposits are known, in Michigan and Montana.

North Central Asia has 35 porphyry copper deposits, including a supergiant deposit in Mongolia and a giant deposit in Kazakhstan. The tract area is estimated to contain about three times the amount of identified porphyry copper resource. This region also hosts three giant sediment-hosted stratabound copper deposits, in Kazakhstan and Russia. The USGS estimates that as much sediment-hosted stratabound copper as has already been discovered may be present.

Southeast Asia Archipelagos host world-class, gold-rich porphyry copper deposits such as a supergiant in Indonesia and about 16 giant deposits in Indonesia, Papua New Guinea, and the Philippines. Although parts of the region are well explored, undiscovered porphyry resources are likely to exceed identified resources.

Eastern Australia has one giant porphyry copper deposit and several small porphyry deposits. Modest undiscovered resources are expected under cover. Australia has been a leading copper producer for decades.

Eastern Europe and Southwestern Asia have been mined for copper since ancient times, and giant porphyry copper deposits have recently been identified. Undiscovered copper is predicted to be about twice the identified resources, both for porphyry deposits along a belt from Romania through Turkey and Iran and for sediment-hosted stratabound deposits in Afghanistan.

Africa and the Middle East have the world's largest accumulation of sediment-hosted stratabound copper deposits, with 19 giant deposits in the Central African Copper belt in the Democratic Republic of Congo and Zambia. Significant undiscovered copper resources remain to be discovered.