Arizona turquoise: Cabochons cut from turquoise produced from the Sleeping Beauty Mine, known for producing turquoise that is relatively free of matrix. 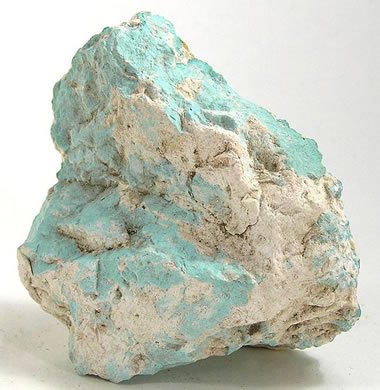 Arizona has one of the longest histories of gemstone production in the United States. Native Americans began producing Arizona turquoise over 1000 years ago. They used the turquoise to make beads and small sculptures.

Arizona is world-famous for its turquoise, peridot, and petrified wood. The state is also famous for copper, and a variety of copper minerals are mined as gemstones. These include azurite, chrysocolla, and malachite. Other Arizona gem materials include agate, amethyst, garnet, jade, jasper, obsidian, onyx, and opal.

Turquoise is Arizona's most important gem material. It ranks first in value of production and is the most widely known of Arizona's gemstones. In 1974 the Arizona Legislature designated turquoise as the official state gemstone.

Chemically, turquoise is a hydrous phosphate of copper and aluminum. It is often associated with rocks that can be mined for their copper content. As billion dollar copper mines were developed in Arizona, some small-scale turquoise mining opportunities were lost. Often the value of a small turquoise mine is not worth the cost of disrupting a large copper mine. It is simply a matter of economics.

When the mineral olivine is of gemstone quality, it is known as "peridot." It is a bright yellow-green to dark green gem material that can be cut into beautiful faceted stones. Arizona is the world's leader in the production of gem-quality peridot. Most of it is produced from the Peridot Mesa and Buell Park areas of the San Carlos Reservation.

The peridot occurs as xenoliths within basalt flows and is exposed by hard rock mining. Peridot is also found in the soils above the basalt flows and in the sediments of nearby washes. Most of the stones are very small (less than 5 carats) and heavily included, but many very high quality pieces are found.

Arizona Amethyst: A beautiful reddish-purple amethyst from the Four Peaks Mine, Maricopa County, Arizona. Four Peaks is the most important amethyst mine in the United States and is famous for producing amethyst with a reddish-purple color. This is a 10.5 x 8.5 millimeter gem, weighing about 3.15 carats. It was cut by Jack Lowell of ColoradoGem.com.

The most important amethyst mine in the United States is the Four Peaks Mine, located high in the Mazatzal Mountains of Maricopa County, Arizona. This amethyst deposit has been known and mined for over 100 years, but its placement in remote and rugged terrain, at an elevation of about 6,500 feet, in high-desert climate with heavy winter snowfall, makes getting there, working there, and being supplied there a significant challenge.

During the early decades of the mine's history, production was sporadic, but in recent decades it has been more seasonal as the popularity of gems from this locality has grown.

The amethyst at Four Peaks is found as crystals in fractures and cavities in a fault-brecciated quartzite of the Mazatzal Formation. Four Peaks amethyst ranges in color from very pale purple to deep reddish purple, purple, and purplish red. Some specimens considered to be overcolor have been lightened by heat treatment.

Most of the amethyst is heavily etched and corroded by contact with hydrothermal solutions. Much is overgrown by later quartz or other minerals, and the full potential of many pieces are unknown until cleaning, sawing and study. Nevertheless, the Four Peaks mine produces a lot of wonderful amethyst and is the only steady source of commercial amethyst mined within the United States. 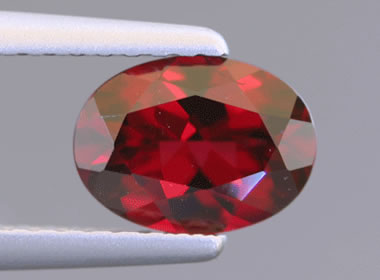 One Arizona gemstone that makes people smile is the "ant hill garnet." These are tiny garnets, rarely over one carat in weight, that are mined by ants in the process of excavating their homes. The ants haul the gems to the surface and discard them on the anthill. The rain washes away the dirt and moves the stones to the flanks of the ant hill.

Native Americans have known about these garnets for generations. Today they collect them in large numbers and sell them in parcels to rockhounds and lapidaries. They are then cut into gems and used to make novelty jewelry. Many ant hill gems are a red chrome pyrope garnet with a high color saturation. The stones are small enough that they exhibit a rich ruby-red color when faceted or cabbed. 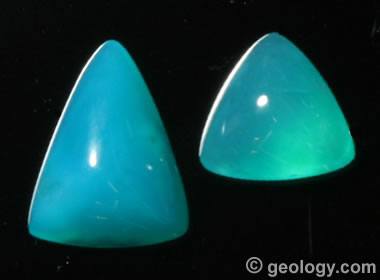 This is a gem that you will not find in the typical mall jewelry store. Much of the best gem silica is in the hands of mineral and gem collectors. So little has been produced and quality cabs are so costly that you will be lucky to find it anywhere. Your best chance will be a jewelry store that specializes in high-quality one-of-a-kind items.

Arizona Fire Agate: Two freeform cabochons of Arizona fire agate. The cab on the left measures 8 mm x 12 mm and weighs 1.77 carats, and the cab on the right measures 9 mm x 12 mm and weighs over 4 carats. The stone on the left has botryoidal hemispheres which are only about 1 millimeter across, and as a result, the cabochon has a rather flat surface. However, the stone on the right has botryoidal hemispheres that span the full width of the stone, which makes it a much thicker cabochon.

Arizona is one of the world's few sources of fire agate, a rare, beautiful, and interesting gem. At first glance it is brown and uninteresting. Then, as the eye draws near, flashes of iridescent yellow, orange, red and green burst from curved surfaces within the stone.

The colors change as the gem is moved, as the light is moved, or as the head of the observer is moved. The phenomenon is reminiscent of opal, yet it is completely different. The name "fire" is used, but the color is not caused by the dispersion seen in diamond.

The colorful flashes are produced as incident light interacts with curved surfaces of agate and thin coatings of iron oxide or iron hydroxide within the stone. These coatings were formed on botryoidal agate surfaces, between episodes of growth, back in geologic time.

Fire agate is a beautiful gem, but it is rare and known by few people. As a result it lacks the popularity that its appearance and phenomenon deserve -- and that keeps the price lower than expected.

Cutting fire agate is laborious work. Each gem must be individually sculpted, following the contours of the botryoidal surfaces. This must be done to fully expose the color and present a gem with a pleasing geometry. Every piece of fire agate jewelry is designed and crafted to hold a unique stone.

Fire agate jewelry is made by highly skilled people. Often the same person finds the rough, cuts the stone, and crafts the finished piece of jewelry. Look for fire agate in jewelry design and lapidary shops in Arizona, one of the few locations where fire agate is mined.

The world's most significant petrified wood locality is located near Holbrook, Arizona. Here, about 225 million years ago, an enormous number of trees were buried by stream sediments and volcanic ash.

Over time, silica-rich ground water petrified the wood and converted it into chalcedony. Dissolved elements in the waters gave the chalcedony vivid colors. Later, weathering and erosion unearthed the logs, and today they are scattered across the land surface because the hard chalcedony is more resistant to weathering than the rocks and soils around it.

A portion of the area has been set aside as Petrified Forest National Park; however, there are many locations outside of the park where lapidary-quality petrified wood has been produced. Arizona petrified wood is some of the most colorful in the world, with red, orange, yellow, white, blue, violet, gray, and brown being common colors.

Petrified wood is used to produce cabochons, beads, and other jewelry items. Most of the wood that is high enough quality to polish is used to make ornamental objects such as tabletops, bowls, bookends, paperweights, desk sets, small sculptures, and tumbled stones.

Arizona azurite, malachite, and chrysocolla: This photo shows several cabochons cut from Arizona copper minerals. They are an oval of chrysocolla and malachite on the left; three triangular cabs of azurite and malachite; and on the right, a quartz cabochon with chrysocolla inclusions. All materials were found in the Morenci area, a famous copper locality.

In addition to turquoise, many other copper minerals can be used as gemstones. In Arizona, chrysocolla, malachite, and azurite with beautiful blue and green colors are often found. They can be cut into beautiful cabochons and used in jewelry.

These are soft minerals that scratch easily, so stones cut from them are best used in jewelry such as pendants and earrings that will not encounter abrasion or impact. They are attractive and popular gems.

When azurite and malachite occur in close proximity within the same rock, gems that display both materials can sometimes be cut. The result is a gem known as azurmalachite that combines the beauty of both gems. Some of the gems in the accompanying photo are azurmalachite. See our article about azurmalachite here.

Agate and jasper are very common materials that occur in many parts of Arizona. They can be easily found in streams, dry washes, and scattered on the surface where vegetation is sparse. Many specimens are colorful, and that makes them a favorite of Arizona rockhounds. Without a doubt, these two materials are found in tonnages that exceed all other types of gemstones combined. As a result, they are always running in rock tumblers and being cut by lapidaries across the state.

The most beautiful specimens are often sliced and cut into cabochons for use in jewelry. Larger colorful specimens are used to make book ends, desk sets, clock faces, and many other craft projects.

Arizona Apache Tears: Apache tears are nodules of obsidian that can be tumbled to a brilliant luster in a rock tumbler, or sliced and cut into faceted stones or cabochons.

Apache tears are nodules of translucent obsidian that can be collected in parts of Arizona that have geologically recent volcanic activity. They are often tumbled to produce jet-black polished stones. They can also be sliced and cut into faceted stones or cabochons. They are a popular souvenir sold in gift shops throughout the state.