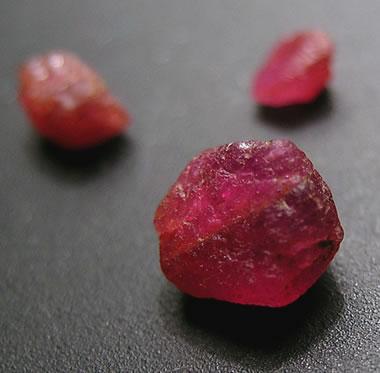 Most people are surprised to hear that rubies, sapphires, and emeralds have been found in North Carolina. They are even more surprised when they learn that there are about a dozen locations in North Carolina where anyone can look for gemstones and keep anything that they find.

Reports on the Huffington Post and ABC News websites describe how some visitors have found emeralds worth over $10,000 in-the-rough. If you want to read a great summary of North Carolina gemstones, see Joseph Hyde Pratt's classic article titled: Gems and Gem Minerals of North Carolina in the 1933 edition of American Mineralogist. That article was written when some mines were in their peak of production.

Some of the mines and other gem-producing localities are still open, but instead of being mined by a company, they are now mined by people like you. If you want to look for gems yourself, here is a directory of pay-to-dig mines in North Carolina and other states. The mines are very popular and attract thousands of visitors during the summer months. There are more pay-to-dig mines in North Carolina than in any other state in the nation.

Some local businesses have skilled gem cutters and bench jewelers who can turn a nice piece of rough that you find into a beautiful piece of jewelry. Imagine what it would be like to own a great ring or other piece of jewelry and be able to say that you found the beautiful stone?

Being totally honest, the odds are against you finding something like that on your first visit, but many people have made spectacular finds. So, plan your gem-hunting vacation to North Carolina! 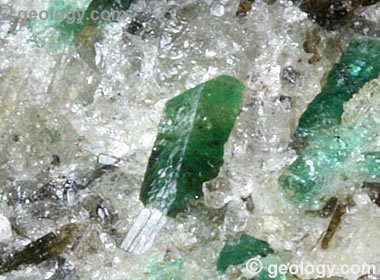 North Carolina Emerald: Photo of North Carolina emerald crystals from the Crabtree Emerald Mine. These crystals are embedded in a pegmatite that is rich in quartz, feldspar, black tourmaline, and bright green emerald. The emerald crystal in the center of the photo is only about 1/4 inch in length. Emerald-rich pieces of pegmatite from the Crabtree Mine are often slabbed and used to make interesting cabochons that display beautiful green emerald crystal cross-sections on a background of white pegmatite with a few crystals of black schorl tourmaline.

The Crabtree Emerald Mine

Mining began there in 1895 and continued until the early 1990s. The mine was operated by Tiffany and Company and a succession of other owners. Numerous clear emerald crystals were produced, but most of the production was called "emerald matrix." That was a white pegmatite that could be slabbed and cut into cabochons that display green and black prism cross-sections of emerald and schorl tourmaline. Mining followed the dike along the surface and then followed the dike underground to a depth of a few hundred feet. Eventually, depth and groundwater intrusion made mining too difficult for common sense and profitability. 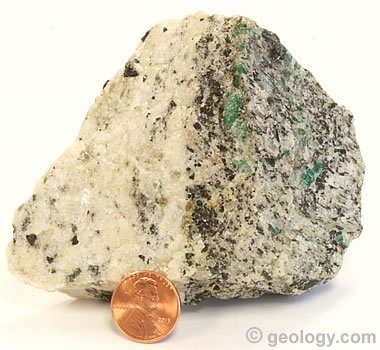 Crabtree Emerald Mine pegmatite: A specimen of the Crabtree Pegmatite of western North Carolina. This granitic pegmatite filled a two-meter-wide fracture which contained emerald along the walls of the fracture and yellow beryl in the center. It was mined for emeralds by Tiffany and Company and a series of property owners between 1894 and the 1990s. Many fine clear emeralds were produced, but most of the emerald-bearing rock was sold as "emerald matrix" for slabbing and cabochon cutting. The cabochons displayed emerald and tourmaline prisms in a white matrix of quartz and feldspar. This specimen is about 7 x 7 x 7 centimeters in size and contains numerous small emerald crystals that are up to several millimeters in length associated with schorl.

Today, the deep mine is closed and flooded, but you can still visit the Crabtree Emerald Mine, and for a small fee you can prospect the rock rubble that was brought up out of the mine. Lots of people do it, and two of the photos on this page show a piece of black and white pegmatite, with prismatic emerald and tourmaline crystals, which was picked from the Crabtree dump. The dump still produces occasional nice specimens of emerald, black tourmaline, garnet, aquamarine, and yellow beryl. The people who find them are willing to do hard work, risking a few blisters and brush burns.

North American Emerald Mines operates a mine near Hiddenite, North Carolina. Since 1995 they have produced thousands of carats of gem quality emerald, including a 1,869-carat crystal that is now in the Houston Museum of Natural History and valued at about $3.5 million. The emeralds have been found in hydrothermal veins and pockets within limestone. A crushed stone quarry on the same property is operated carefully, with an eye open for signs of the veins and pockets. The company boasts that they are one of the only gem mines in the world that sells their country rock. 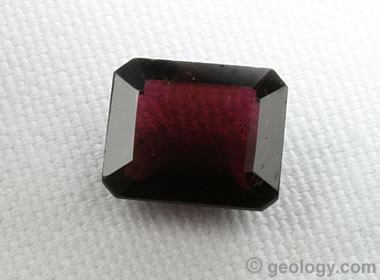 Garnets have been found at many locations in North Carolina. The garnets are small crystals liberated by weathering from garnetiferous schist. These crystals are found scattered through soil above the schist or in the sediment of nearby streams.

Almandite and rhodolite garnets have been found in the state. They are often so dark that faceted stones of one carat or more appear nearly black without strong illumination. Today there are several fee mining sites where anyone can pay a small fee, look for garnets and keep any that are found.

The first gold discovery in the United States was made in North Carolina in 1799 by Conrad Reed. He found an interesting - and very heavy - yellow rock in Little Meadow Creek, which flowed across the farm owned by his parents in Cabarrus County. The rock weighed seventeen pounds, but young Reed didn't know that its extreme weight was caused by its gold content. He took the rock home, where his family thought that it was an interesting rock and used it as a door stop for the next few years.

They speculated that the rock might contain gold but did not know how to confirm that. In 1802 John Reed, who was the property owner and Conrad's father, showed it to a Fayetteville jeweler who purchased it from him for $3.50 - a very tiny fraction of what the rock was worth at that time!

The following year John Reed determined that Meadow Creek on his property contained an abundance of gold nuggets. They could be produced by digging the creek's sediments, washing them, and separating the nuggets out by hand. He formed a partnership with a few of his neighbors, who agreed to provide slave labor to mine the gold during times of the year when the slaves were not needed to tend crops. Thus the first gold mine in the United States opened with slave labor in 1803. By 1924 they had recovered over $100,000 worth of gold.

Word spread that Reed's Gold Mine was producing a lot of gold, and people all over the state began searching their streams for gold. Many of them bought gold pans, and went to work in the streams to find gold. A few of them found gold veins along the streams, and underground mining began on several properties. Gold-bearing quartz veins were found on Reed's property, and underground mining began in 1831.

North Carolina was the leading gold-producing state until 1848 when the California Gold Rush began. Production in North Carolina gradually decreased until the early 1900s, when almost all of the mines had closed. Today lots of people still look for gold in North Carolina - and some of them find it. They mostly work with metal detectors and gold pans.

Most of the land in North Carolina is owned by individuals, companies, or governments and is closed to gold prospecting. If you are caught removing gold from one of their properties you could be faced with civil or criminal liability (learn more here). However, several property owners have opened their land for pay-to-dig mining. There you can pay a small fee, look for gold, abiding by their rules, and keep anything that you find.