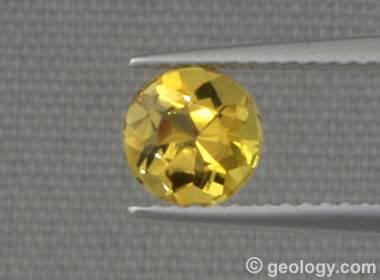 Heliodor: A round faceted heliodor with a golden-yellow color from Madagascar, measuring 5.97 millimeters in diameter and weighing 0.72 carats.

Heliodor is a name used by mineralogists and gemologists for specimens of the mineral beryl with a yellow, greenish yellow, or golden-yellow color. Pure beryl is colorless, but impurities within the mineral cause beryl to occur in a variety of different colors. The yellowish colors of heliodor are usually caused by small amounts of iron within the mineral's crystal structure.

Yellow beryl and golden beryl are other appropriate names for heliodor. They identify the mineral species (beryl) and use color (yellow) as an adjective.

The name "heliodor" is derived from two Greek words: helios, which means "sun," and doron, which means "gift." They combine as "gift from the sun." 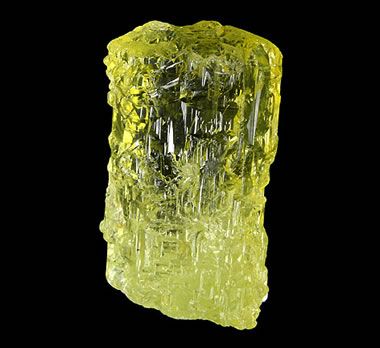 The Federal Trade Commission publishes a set of Guides for the Jewelry, Precious Metals and Pewter Industries. In the next revision of these guides, they propose language stating that "it is unfair or deceptive to mark or describe a product with an incorrect varietal name." The names "yellow emerald" and "green amethyst" will be held up as examples of names that could be misleading "based upon consumer perception evidence." [1] 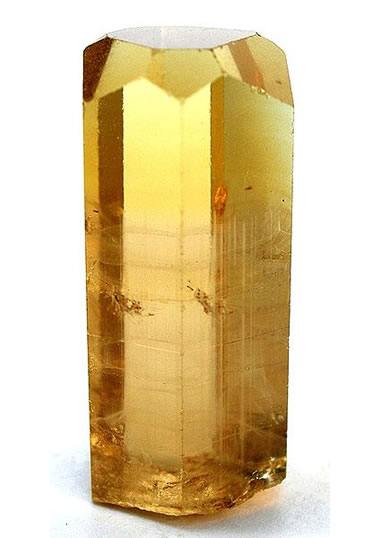 Heliodor with good clarity and a rich yellow, yellow-green or golden-yellow color can often be cut into attractive gemstones. Its Mohs hardness of 7.5 to 8 enables it to stand up well to abrasion. It is a suitable gemstone for rings, pendants, pins, earrings, bracelets, and almost any other jewelry use.

The demand for heliodor is small compared to the demand for other gem beryls such as emerald (a green beryl), aquamarine (a blue to greenish blue beryl) and morganite (an orange to pink beryl). The jewelry-buying public is not familiar with the gem. It has only been used in limited amounts in commercial jewelry because a steady supply of calibrated stones in large numbers has not been developed.

As a result, heliodor is rarely seen in mall jewelry stores. Instead, it is more likely to be found in design shops and stores specializing in interesting gems and jewelry. Heliodor is a popular stone with gem collectors, and well-formed crystals with good color are popular with mineral collectors.

The iron contained in heliodor can be altered by heat treatment. Light heating will sometimes improve the yellow color of a stone. In some stones, further heating will transform yellow heliodor into a greenish blue to blue material. If the color is appropriate, this material will be sold as heat-treated aquamarine. The color of some yellow heliodor can also be improved by irradiation. Irradiated heliodor is common in the marketplace. 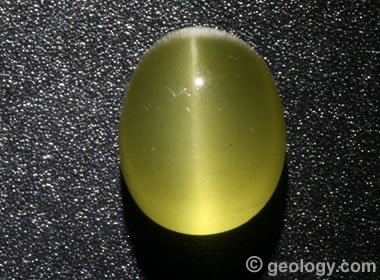 Cat's-Eye Yellow Heliodor: This yellow heliodor was mined in Madagascar and cut into a 10 x 8 millimeter chatoyant oval weighing 4.22 carats. It has a beautiful translucent yellow color and a faint cat's-eye.

Rare specimens of heliodor contain a "silk" of tiny, straight, parallel, needle-shaped inclusions. When this heliodor is cut into a cabochon with the silk oriented parallel to the flat bottom of the stone, the dome of the stone will exhibit a phenomenon known as chatoyancy or cat's-eye. The most desirable chatoyant beryls have a highly desirable body color and a bright, thin eye that perfectly bisects the gem. These stones must be cut by a highly skilled person, who can determine the orientation of the silk within a piece of rough, then cut a stone that best displays a well-centered cat's-eye.

Much of the world's heliodor is produced in Madagascar, Brazil, Namibia, Nigeria, Zimbabwe, Sri Lanka, Russia, and other countries.