The orange to pink gem with growing popularity 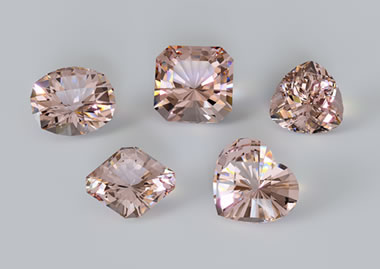 Morganite is the name of an orange to pink gemstone that has significantly grown in popularity since 2010. It is a variety of beryl, a beryllium aluminum silicate mineral with a high durability. Morganite is distinguished from other types of beryl by its orange-pink color. After sapphire, morganite is the second-most-popular colored gem used as a center stone in engagement rings today. [1] 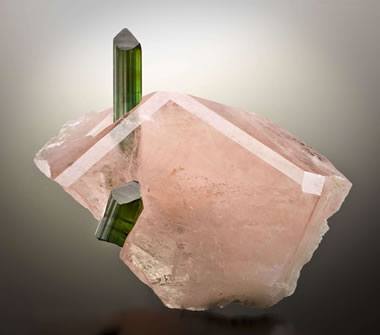 Morganite: An interesting specimen of morganite with tourmaline crystals from the Pederneira Mine in Minas Gerais, Brazil. This specimen has been nicknamed the "Sword in the Stone." Approximately 13.8 x 8.0 x 11.7 centimeters in size. It is an exceptional display piece because of its size, color, crystal form, and artistic appeal; therefore, it is much more valuable as a mineral specimen than as gem-cutting rough. Specimen and photo by Arkenstone / www.iRocks.com.

Morganite has a color that ranges from slightly yellowish orange, to orange, to orangy pink, to pink, to slightly purplish pink. This color range appeals to many people and has an attractive appearance in rose gold jewelry mountings, which have also grown in popularity.

Trace amounts of manganese are the cause of natural color in morganite. Most morganite has a natural color that is very light, especially when it is cut into faceted gems of two carats or less. As a general guide, for best appearance, gems cut from morganite should be at least two carats in size.

This light-colored morganite is often treated with heat or irradiation to increase its color saturation. These treatments make the gems more appealing and marketable. Some of these treatments move the gem toward the pink side of morganite's color range.

Morganite is a pleochroic gem. That means it has slightly different colors when viewed from different directions. It has a slightly richer color when viewed down its "c" crystallographic axis. Cutters who study their rough carefully, and orient their faceted stones with the c-axis perpendicular to the table of the cut gem, will produce stones that exhibit a richer, often pinker color when viewed in the face-up position. 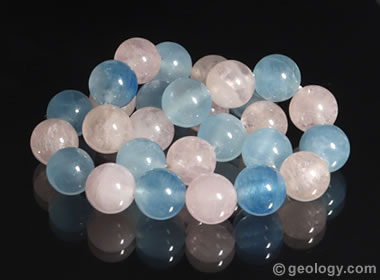 Morganite and Aquamarine Beads: These 8-millimeter round beads were made from morganite and aquamarine.

As a variety of beryl, morganite has a Mohs hardness of 7.5 to 8. This is harder than all but a few popular gemstones (diamond, ruby, sapphire, and topaz) and harder than almost any common object that a gemstone might come in contact with. This makes morganite an excellent stone for use in engagement rings, which are expected to retain an attractive appearance across a lifetime of wear.

Compared to emerald, the green variety of gem beryl, morganite is relatively free of inclusions and fractures. This makes it a more durable gem than emerald when used in jewelry.

Google Trends: The image above is a screenshot from Google Trends, an online tool used to display changes in the number of people who type specific queries into Google. The chart above shows the relative number of people searching Google for morganite. This Google Trends chart was created in December 2019. If you would like to explore the current status of this search query, please click here.

Until about 2011, morganite was almost unknown in jewelry stores. Since then it has been growing in popularity. This can clearly be demonstrated with a graph of search engine query volume from Google Trends (see graph above). Today morganite can be found in most jewelry stores, often in rose gold mountings.

A 2019 survey done by The Knot found that the most popular non-diamond center stones in engagement rings were moissanite (19%), sapphire (18%) and morganite (12%). This is a spectacular rise in popularity for a gem that was poorly known in the marketplace just ten years earlier. [1] 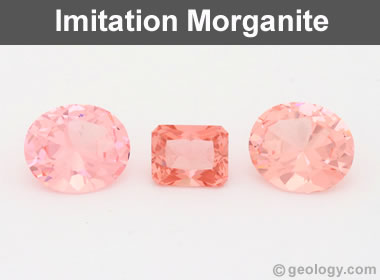 Three types of morganite are present in the gem and jewelry market: natural morganite, synthetic morganite, and imitation morganite. We explain the differences below...

Natural Morganite is gem material that was formed within the Earth by natural processes. It is the most valuable type of morganite and is highly preferred by many buyers. Some people think that natural gems are the only type of gems that they are willing to own and wear.

Imitation Morganite is a man-made material that simply looks like morganite. It is not rare and generally sells for a price that is much lower than natural morganite or synthetic morganite. Many people gladly purchase imitation gems because they look great and cost a fraction of what would be paid for a natural gem.

Morganite's recent surge in popularity should be a caution flag for people who are buying morganite jewelry. This is the perfect time for synthetic morganite and imitation morganite to flow into the gem and jewelry market.

If you are going to spend major money on an item of morganite jewelry, it is important to know if the gem you are buying is natural or man-made. Why? Natural morganite sells for a much higher price than man-made alternatives. You don't want to pay the price of a natural gem and take home a man-made alternative. There is nothing wrong with purchasing a man-made material, if the seller discloses to you that it is man-made, you understand that it is man-made, and you are satisfied with buying a man-made material.

If you have any doubts about a gem, it can be sent to a gemological laboratory for grading and identification. This can usually be done for a cost that is very small compared to the value of the gem.

Compared to gems that have been known and appreciated for hundreds or thousands of years, morganite is a newcomer. Commercial quantities of pink beryl (the name by which morganite was known at that time) with a rich color were first discovered in Madagascar in 1910. George Kunz, Tiffany and Company's chief gemologist, obtained specimens of the material for mineralogical and gemological testing and found them to be exceptional.

Kunz decided that the gem should be named for John Pierport Morgan, an American financier and banker. With help from Kunz, Morgan had built two of the world's most important gem collections and allowed them to be exhibited widely, including exhibits at two World's Fairs. His collections were donated to the American Museum of Natural History, where many of his gems are still on public view today.

Madagascar became the first source of gem morganite, and the material produced there was of a rich pink color. Other commercial deposits were later found in Afghanistan, Brazil, Mozambique, Namibia, and the United States (California and Maine). Today, most of the world's supply of morganite is being mined in the state of Minas Gerais, Brazil.