A rapid hardness test for field and classroom use 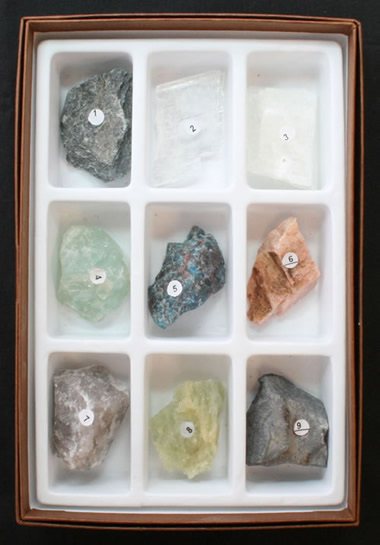 Mohs Hardness Kit: A Mohs Hardness Scale kit containing: (1) talc; (2) gypsum; (3) calcite; (4) fluorite; (5) apatite; (6) orthoclase; (7) quartz; (8) topaz; and (9) corundum. Diamond (10) is not included in most kits to keep the cost down. Also, a diamond specimen would be so small that it would need to be mounted in a handle to be useful. You can find Mohs Hardness Kits in the Geology.com Store.

What is Mohs Hardness Scale?

The Mohs Hardness Scale is a set of ten reference minerals (numbered 1 through 10) that are used to determine the relative hardness of minerals and other objects. In this test the hardness of a mineral is defined as its "resistance to being scratched". A list of the Mohs Hardness Scale Minerals is shown in the table below. A photo of a Mohs hardness kit is shown in the accompanying photo. 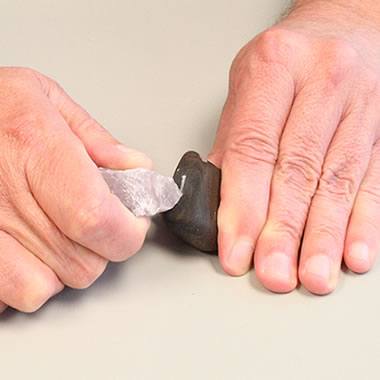 How the Mohs Scale Works

By doing successive tests with different reference specimens, you can closely estimate the Mohs hardness of your mineral specimen.

The Mohs hardness of a mineral is important information for determining the identity of your specimen.

Friedrich Mohs, a German mineralogist, discovered the hardness scale in 1812. He selected ten minerals of distinctly different hardness that ranged from a very soft mineral (talc) to a very hard mineral (diamond). With the exception of diamond, the minerals are all relatively common, easy to obtain, and inexpensive.

See the accompanying table of the Mohs Hardness Scale minerals.

The Mohs Hardness Scale has been used by geologists and geology students for over 200 years. Millions of students have used the Mohs Hardness Test to identify minerals. It is surprising that such a simple test has been in use for over two centuries.

"Hardness" is the resistance of a material to being scratched. The test is conducted by placing a sharp point of one specimen on an unmarked surface of another specimen and attempting to produce a scratch. Here are the four situations that you might observe when comparing the hardness of two specimens:

3. If the two specimens are equal in hardness then they will be relatively ineffective at scratching one another. Small scratches might be produced, or it might be difficult to determine if a scratch was produced.

Some people make their own hardness testing kit using a few common objects. The contents of their kit often include:

This field hardness testing kit sounds like a great idea. These items cost very little, and you can pull them out of a belt pack and test the hardness of an unknown specimen in under a minute.

But, before you make your own kit, we want you to be aware of something. We checked the hardness values of "common field kit" items suggested in three introductory geology textbooks and found some of them to be highly variable. The variabilities that we found are shown in the accompanying table.

So, if you are going to use common items for hardness determination, it is highly recommended that you confirm the hardnesses of all items in your kit.

Test the hardness of your common items if you want to get good results when you use them. 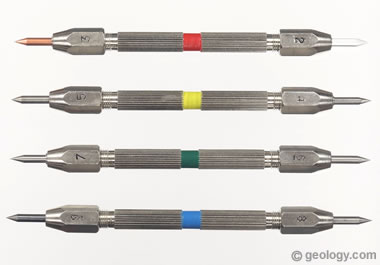 Mohs hardness picks: Hardness picks are easy to use. They have a brass stylus and an alloy "pick" that is used for hardness testing. Place the sharp point of a pick on your unknown specimen and drag it across the surface. It will either produce a scratch, slide across the surface, or leave a trace of metal. They are supplied with a hardness of 2 (a plastic point), 3 (a copper point), and 4 through 9 (carefully selected alloys). They are great for testing small specimens or for testing small grains embedded in a rock. These hardness picks are available in the Geology.com store.

An alternative to using the reference minerals for testing is a set of "hardness picks." These picks have sharp metal points that you can use for very accurate testing. The picks allow much more control, and their sharp points can be used to test small mineral grains in a rock.

The sharp picks can be used easily and either produce a scratch if they are harder than the specimen being tested or leave behind a tiny streak of metal if they are softer. Examine the test site with a hand lens to see the results of your test.

We have used hardness picks and think that they do a great job. They are easier to use and more accurate than testing with specimens. They can be resharpened when they become dull. The only downside is their price (over $100 per set).

Harder than Diamond, Softer than Talc?

Diamond is not the hardest substance known, but the materials that are harder are much more rare. Researchers have reported that wurtzite boron nitride and lonsdaleite can be harder than diamond. [1]

It is unlikely that you will find a mineral that is softer than talc. However, a few metals are softer. These include: cesium, rubidium, lithium, sodium, and potassium. You will probably never need to test their hardness. [2]

Mohs Scale of Hardness Compared to Others

When Friedrich Mohs developed his hardness scale in 1812, very little information about mineral hardness was available. He simply selected ten minerals that varied in hardness and arbitrarily placed them on an integer scale from 1 to 10. It was a relative scale in which a mineral of unknown hardness could be tested against a group of ten index minerals to see where it positioned on the scale.

The Mohs scale has stood the test of time and has been widely used throughout the world for over 200 years - mainly because it is easy-to-do, inexpensive, and people quickly understand it. Other hardness tests have been devised, but none of them have seen such widespread use.

A "Mohs hardness" is a relative integer-scale comparison of "resistance to being scratched." Most other hardness scales use "resistance to indentation under a stylus to which a specific amount of pressure is applied for a specific length of time." Although these tests differ from Mohs hardness in their procedure, they are all tests of the resistance to atoms being dislodged from their positions by pressure against the surface of a mineral specimen.

Hardness Variations in a Single Mineral

Although reference books and websites often list a single hardness for each mineral, many minerals have variable hardness. They have greater or lesser hardness depending upon the direction in which they are being scratched.

Another example is diamond. The people who cut diamonds have known about its variable hardness for hundreds of years. They know that parallel to the octahedral crystal faces, a diamond crystal is almost impossible to saw and very difficult to polish. The diamond can be broken in this direction by cleaving, and the best method for cutting it in this direction is with a laser. The softest and best direction to saw or polish a diamond crystal is parallel to its cubic crystal faces. This information is critical knowledge for the craftsmen who plan the design of a faceted diamond. Understanding it and working with it saves time, saves money and creates a better product with less waste.

Weathering can also influence the hardness of a mineral specimen. Weathering changes a mineral's composition, with the weathering product usually softer than the original material. When testing the hardness or streak or other property of a mineral, the best way to test is on a freshly broken surface with expected luster that has not been exposed to weathering.

The hardness test developed by Friedrich Mohs was the first known test to assess resistance of a material to scratching. It is a very simple but inexact comparative test. Perhaps its simplicity has enabled it to become the most widely used hardness test.

Since the Mohs Scale was developed in 1812, many different hardness tests have been invented. These include tests by Brinell, Knoop, Rockwell, Shore and Vickers. Each of these tests uses a tiny "indenter" that is applied to the material being tested with a carefully measured amount of force. Then the size or the depth of the indentation and the amount of force are used to calculate a hardness value.

Why are there so many different hardness tests? The type of test used is determined by the size, shape, and other characteristics of the specimens being tested. Although these tests are quite different from the Mohs test, there is some correlation between them. [2]

When testing for hardness, remember that you are testing "the resistance to scratching." During the test, some materials might fail in other ways. They could break, deform, or crumble instead of scratching. Hard materials often break when subjected to stress. This is a lack of toughness. Other materials might deform or crumble when subjected to stress. These materials lack strength. Always keep in mind that you are testing for the resistance to being scratched. Don't be fooled by other types of failure in the specimen being tested.

The Mohs Hardness Test is almost exclusively used to determine the relative hardness of mineral specimens. This is done as part of a mineral identification procedure in the field, in a classroom, or in a laboratory when easily identified specimens are being examined or where more sophisticated tests are not available.

In industry, other hardness tests are done to determine the suitability of a material for a specific industrial process or a specific end-use application. Hardness testing is also done in manufacturing processes to confirm that hardening treatments such as annealing, tempering, work hardening, or case hardening have been done to specification.

Some Notes on Spelling

Mohs Hardness Scale is named after its inventor, Friedrich Mohs. This means that an apostrophe is not needed when typing the name of the test. "Moh's" and "Mohs' " are incorrect.

Google is really smart about these names. You can even type "Moe's Hardness Scale" as a query and Google knows to return results for "Mohs Hardness Scale."   :-)