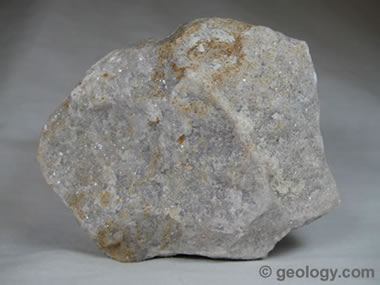 Anhydrite: Anhydrite from Balmat, New York. This specimen of massive anhydrite has a typical gray color and a sugary appearance on broken surfaces caused by exposure of cleavage faces. Specimen is approximately 4 inches (10 centimeters) across.

Anhydrite is an evaporite mineral that occurs in extensive layered deposits in sedimentary basins where large volumes of sea water have been evaporated. It is typically interbedded with rocks that include halite, gypsum, and limestone. These accumulations can be hundreds of feet thick. On a smaller scale, anhydrite can form in shoreline or tidal flat sediments from the evaporation of sea water.

Anhydrite also occurs as a vein-filling mineral in hydrothermal deposits. It is deposited from solution, often along with calcite and halite, as gangue in sulfide mineral deposits. Anhydrite is also found in the cap rock of salt domes.

Anhydrite receives its name from the Greek "anhydrous" which means "without water." It readily converts to gypsum under humid conditions or in contact with groundwater. This transition involves the absorption of water and a significant change in volume. That expansion can cause deformation in the rock units. If gypsum is heated to about 200 degrees Celsius, it will yield water and be converted to anhydrite. This reaction occurs much less often. 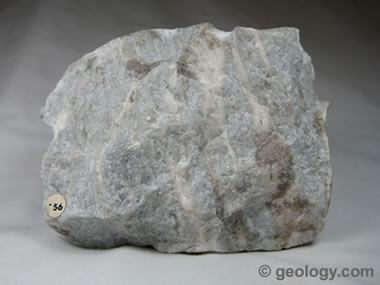 One of the most distinctive properties of anhydrite is its cubic cleavage. It cleaves in three directions at right angles. This can easily be seen in coarsely crystalline specimens or with a hand lens in fine-grained specimens. This distinctive cleavage has earned anhydrite the nickname of "cube spar."

Anhydrite can be a small challenge to identify when it occurs in massive form. It can be confused with gypsum, calcite, or halite - which it is almost always associated with. Compared to gypsum, anhydrite exhibits cleavage in three directions at right angles and has a greater hardness. Its right angle cleavage and lack of acid reaction allows it to be distinguished from calcite. Compared to halite, anhydrite is insoluble and slightly harder. 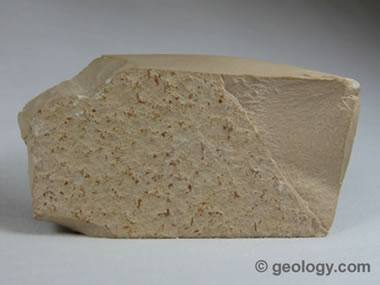 Anhydrite: Anhydrite from Mound House, Nevada with a very fine texture that could be confused with lithographic limestone. Specimen is approximately 4 inches (10 centimeters) across.

Anhydrite can be substituted for gypsum in some of its uses. Both minerals are crushed for use as a soil treatment, and in this purpose anhydrite is superior. One ton of anhydrite has more calcium than one ton of gypsum - because gypsum is about 21% water by weight. This yields more calcium per ton in a soil application. Anhydrite also has a higher solubility, which helps it benefit the soil quickly.

Small amounts of anhydrite are used as drying agents in plaster, paint, and varnish. It is also used along with gypsum to produce plaster, joint compound, wallboard, and other products for the construction industry. Anhydrite has also been used as a source of sulfur in the production of sulfuric acid.

Hydrofluoric acid is produced using fluorite and sulfuric acid. For every ton of hydrofluoric acid produced, about 3 1/2 tons of synthetic anhydrite is produced. For decades this synthetic anhydrite was considered to be a nuisance product that had a disposal expense. However, much of it is now dried in a kiln and used as a raw material for producing cement, plaster, and flooring. It is also used as a filler in the production of plastics and paper products.