Sulfur terminal: Piles of yellow sulfur at a terminal near Vancouver, British Columbia, Canada. The sulfur is brought by rail from oil and natural gas processing facilities in the Province of Alberta. At this terminal it is loaded onto barges and ships for bulk transport. Photo copyright iStockphoto / teekaygee. 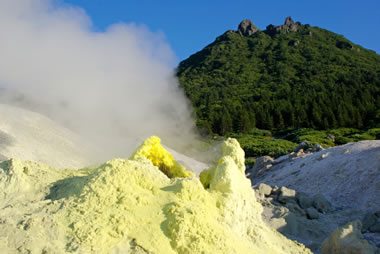 Sulfur fumarole: As hot volcanic gases, rich in sulfur, escape from a volcanic vent, the gases cool and sulfur is deposited as yellow crystals around the vent. This fumarole on the island of Kunashir (in the Kuril Islands, northeast of the Japanese island of Hokkaido) has a significant accumulation of bright yellow sulfur. Photo copyright iStockphoto / Sergey Dubrovskiy.

Sulfur is a chemical element with an atomic number of 16 and an atomic symbol of S. At room temperature it is a yellow crystalline solid. Even though it is insoluble in water, it is one of the most versatile elements at forming compounds. Sulfur reacts and forms compounds with all elements except gold, iodine, iridium, nitrogen, platinum, tellurium, and the inert gases.

Sulfur is abundant and occurs throughout the Universe, but it is rarely found in a pure, uncombined form at Earth's surface. As an element, sulfur is an important constituent of sulfate and sulfide minerals. It occurs in the dissolved ions of many waters. It is an important constituent of many atmospheric, subsurface, and dissolved gases. It is an essential element in all living things and is in the organic molecules of all fossil fuels.

World Sulfur Production: During 2015, an estimated 70 million metric tons of sulfur was produced worldwide. The production was widely divided among a large number of countries. The top 12 producing countries were China, the United States, Russia, Canada, Germany, Japan, Saudi Arabia, India, Kazakhstan, Iran, United Arab Emirates, and Mexico. These countries are where the sulfur was separated from its geologic source material rather than the original source of the sulfur, since most sulfur is separated when fossil fuels are processed or sulfide ores are smelted. Data from the United States Geological Survey. [7]

Sulfur is Abundant and Everywhere!

The information below should convince you that sulfur is extremely abundant and present everywhere. 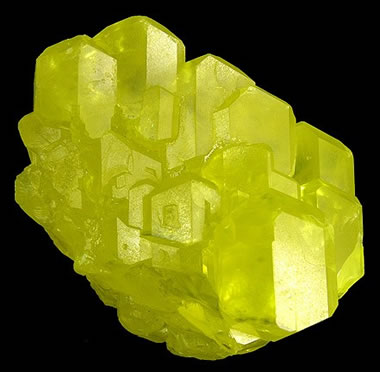 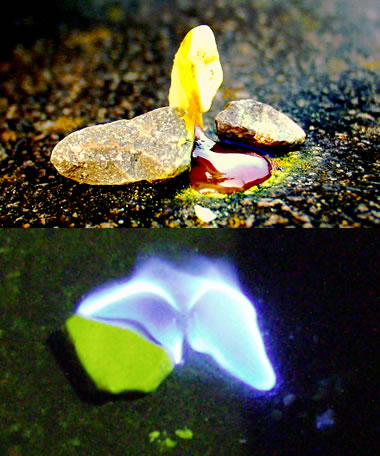 Burning sulfur: Pieces of sulfur burning in daylight and in the dark. Photo by Johannes 'volty' Hemmerlein, used here under a GNU Free Documentation License.

The name "sulphur" has been used in the United Kingdom and throughout the British Empire for hundreds of years. "Sulfur" is the spelling used in common and scientific communication in the United States. In 1990 the International Union of Pure and Applied Chemistry designated "sulfur" as the preferred spelling. How the word is spelled can often reveal the age and origin of publications and authors.

Sulfur as a Native Element Mineral

As a mineral, sulfur is a bright yellow crystalline material. It forms near volcanic vents and fumaroles, where it sublimates from a stream of hot gases. Small amounts of native sulfur also form during the weathering of sulfate and sulfide minerals.

The largest accumulations of mineral sulfur are found in the subsurface. Many of these are in fractures and cavities associated with sulfide ore mineralization. The largest are associated with evaporite minerals, where gypsum and anhydrite yield native sulfur as a product of bacterial action. Significant amounts of sulfur have been produced from the cap rock of salt domes but this type of production is rarely done today.

According to the International Mineralogical Association's database, over 1000 minerals contain sulfur as an essential part of their composition. [8] This is a result of sulfur's ability to form compounds with all but a few other elements. The tables below list a small number of sulfide, sulfarsenide, sulfosalt and sulfate minerals. Many of the most common sulfur minerals are included in the list, but the list is not intended to be complete.