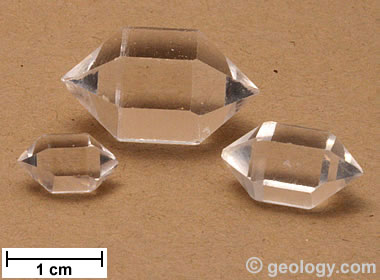 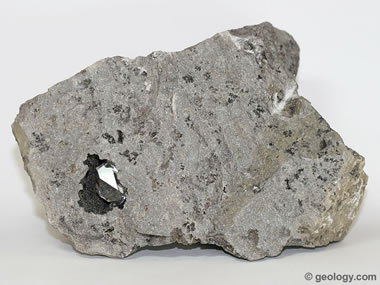 Vuggy rock with drusy quartz, hydrocarbon and a nice "Herkimer diamond". Rock is 6" across. Click here for a larger image, or zoom in for detail.

What are "Herkimer Diamonds"?

"Herkimer diamonds" is the name given to the doubly terminated quartz crystals found in Herkimer County, New York and surrounding areas. Examples of these crystals are shown in the photos on this page.

Herkimer diamonds have the typical crystal habit of quartz; however, however, instead of having a termination on one end they are doubly terminated. This is a result of the crystals growing with very little or no contact with their host rock.

Doubly terminated crystals are very rare. This is what makes "Herkimer diamonds" amazing creations of nature. They are very popular with mineral collectors. 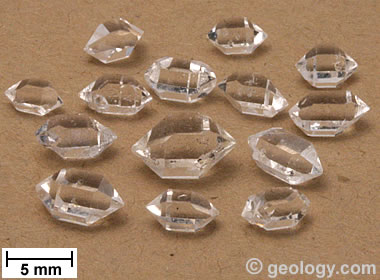 Although Herkimer County, New York is the location for which these crystals are named, similar doubly terminated quartz crystals have been found in many other locations, including Arizona, Afghanistan, Norway, Ukraine, and China. They have the same appearance but cannot rightfully be called "Herkimers." The doubly terminated quartz crystals shown in the accompanying photo are from a deposit in Afghanistan.

You might also hear the names "Little Falls Diamond" or "Middleville Diamond" used in the Herkimer, New York area. These are similar quartz crystals named for communities in Herkimer County near where they were found. The generic name "Herkimer diamonds" is used for specimens from all of these localities.

The "Herkimer diamonds" of New York are not a recent discovery. The Mohawk people and early settlers knew about the crystals. They found them in stream sediments and plowed fields. They were amazed with the crystals and immediately held them in high esteem. People used the crystals as amulets, used them to make tools, and traded them with other tribes. However, people began to lose interest in the crystals when European glass beads began to arrive in the early 1600s. [1]

These are a few of the many crystal forms seen in "Herkimer diamonds". [2]

"Herkimer diamonds" share most of the physical properties of other forms of quartz. They are almost always transparent and range from colorless to smoky in color. "Herkimer diamonds" are, by definition, doubly terminated; however, they are known to occur in a wide range of crystal forms (see illustration). 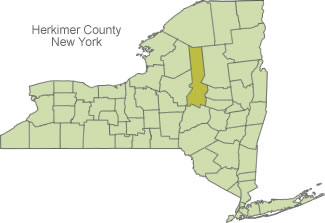 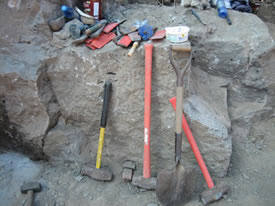 Some of the best places to find "Herkimer diamonds" today are located along New York State Routes 28 and 29 near Middleville, New York. (When visiting this area it is important to remember that all land in New York either belongs to the government or is private property. Collecting minerals from government lands is illegal in New York, and collecting on private property always requires permission in advance. Learn more about the laws governing mineral collecting in the United States.)

There are several commercial mines on New York State Routes 28 and 29. These include Ace of Diamonds Mine, Herkimer Diamond Mines, and Crystal Grove Diamond Mine and Campground. These mines allow collectors to enter and prospect for a nominal fee. They also rent equipment such as rock hammers, wedges, and other small tools. They also have small exhibit areas where you can view and/or purchase specimens.

The key to finding "Herkimer diamonds" is a knowledge that they occur in cavities (vugs) within the Little Falls Dolostone (see photo above). These cavities can be smaller than a pea or several feet across. At both of the mines listed above, the Little Falls Dolostone is exposed at the surface, and a significant amount of broken rock is scattered across the quarry floor. 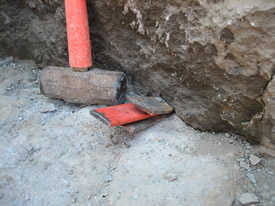 The easy way to prospect is to find pieces of vuggy rock and break them open with a heavy hammer. Usually any vugs found will be empty, but if you are lucky, the rock will break to reveal one or several "Herkimer diamonds" within a cavity. If your visit to the mine will last just a few hours or even a single day, this is a good way to spend your time.

Dolostone is a very tough rock, so expect to work hard. At locations where "Herkimer diamonds" are found, the dolostone is usually heavily silicified. This significantly increases the hardness and toughness of the rock. The use of safety glasses is required, and a pair of goggles is even better. Wise collectors wear gloves to protect their hands. We always wear jeans or heavy long pants and a long-sleeve shirt for "find and break" prospecting. Small pieces of dolostone will sometimes fly when a rock breaks, and they can easily cut or bruise a person wearing short pants.

The "find and break" prospecting method described above is employed by many people who visit these mines and can lead to a few good finds. The keys to success are selection of good rocks to break and not being discouraged if you break fifty rocks without finding a crystal. Here's a tip: The best rocks to break are rocks with visible vugs on the outside. There might be more vugs inside. 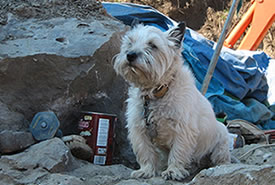 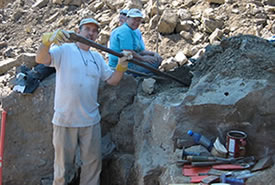 For finding large quantities of crystals, the most successful mining method is to break into large cavities in the quarry walls and floors using sledge hammers and wedges (power equipment is not permitted at the mines listed in this article). This method requires tools, patience, time, and a knowledge of how to break an extremely durable dolostone. 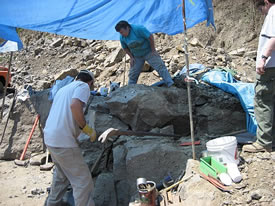 Later that afternoon - finally getting into the cavity!
Photo copyright Bill McIlquham. 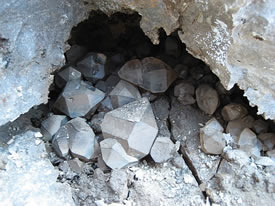 On a recent visit to the Ace of Diamonds Mine at Middleville, New York, we met Bill McIlquham of Peterborough, Ontario. Bill was mining for Herkimers with his wife Anne, their friend Laurie Mullett and mascot Duffy the Rockhound. They had located a large cavity and were carefully opening it. (Photos of their work shown here were kindly shared with Geology.com by Bill and fellow miners Cheryl Haberman and Alan Summer.)

The McIlquhams have been mining for Herkimers for about 12 years and have found many large cavities. A key element in their success is a nice array of hammers, wedges, and pry-bars. Instead of bashing the dolostone repeatedly with a hammer to break it into tiny pieces, Bill uses a sledge hammer and wedges to very carefully exploit existing fractures in the rock.

He begins by placing one wedge in a fracture and tapping it an inch or two deep. A second wedge is tapped into the fracture and additional wedges are used if needed. These wedges exert forces that penetrate into the rock and break large blocks of dolostone free. Fractures within the large dolostone blocks are then located and exploited until the large block has been reduced to smaller pieces that can be lifted from the quarry. 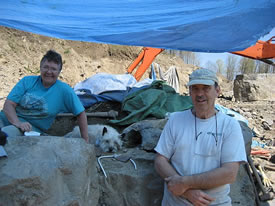 If a collector is lucky and determined to prevail over the durable dolostone, the reward could be breaking into a cavity. These cavities can contain a few to a few thousand nice "Herkimer diamonds" that range in size from a couple of millimeters to over twenty centimeters in size. Perfect single crystals, doubles and crystal clusters might all be found in a single cavity.

The cavity shown in the photos was opened by Anne and Bill. It contained over one hundred quartz crystals in a variety of sizes, ranging from a few millimeters to several centimeters in length. A very nice prize for a day's work! Two large clusters from the cavity are shown on this page.

"Herkimer Diamonds" is a Misnomer

The name "Herkimer diamonds" has been used for over 100 years and is deeply ingrained in the language of local people as well as the rock and mineral community. The word "diamond" grabs attention and may imply a higher value to the person who hears it than the word "quartz." As a result, some people might be misled or confused by the name "Herkimer diamond." For that reason, anyone who is selling "Herkimer diamonds" must be sure to let all buyers know that they are purchasing quartz and not a real diamond.

Why is this important? In 2015, the Federal Trade Commission announced that the improper use of a mineral species or variety name could result in legal actions against the seller. Their proposed revisions to the Guides for the Jewelry, Precious Metals, and Pewter Industries held up "yellow emerald" (a variety of the mineral beryl known as heliodor) and "green amethyst" (amethyst that has been heated to convert it to a green color) as examples. The name "Herkimer diamond" will likely fall into the category of names that the FTC is working to discourage.

Although the name "Herkimer diamond" is a misnomer, and likely confuses a few people, the name also grabs attention and stimulates curiosity. If these crystals were named "Herkimer quartz", they would probably not be nearly as popular, and far fewer people would know of and enjoy them. Without a doubt, they attract a lot of tourist money to Herkimer County every year. 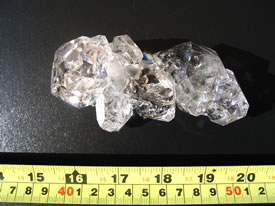 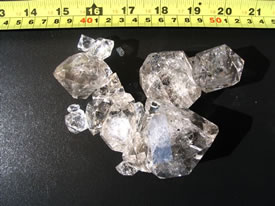 Why hunt for "Herkimer diamonds"? It's great fun and every time you break open a rock you will look with anticipation to see if you liberated an unseen quartz crystal. Nice "Herkimer diamonds" are highly prized mineral specimens and are sought by mineral collectors worldwide. Large numbers of Herkimer crystals are also used in jewelry because their natural "facets" are both beautiful and interesting. Some people also seek "Herkimer diamonds" because they are thought to have "holistic qualities."

If you like minerals and have an opportunity to visit the Herkimer County area of New York, consider spending a day looking for "Herkimer diamonds". Be sure to wear clothes that are suitable for working outdoors. Safety glasses are required, and you will be sorry if you don't wear gloves. If you need a sledge hammer or other tools, you can rent them at the mine for a very small fee. If you want to obtain some nice "Herkimer diamonds" but are unable to visit Herkimer to mine them yourself, please visit Bill's site at HerkimerDiamonds.ca.