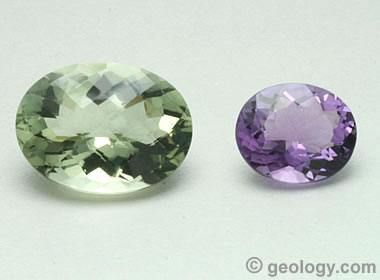 Prasiolite and Amethyst: Two faceted stones, prasiolite on the left and amethyst on the right. Prasiolite is a yellowish green to green material that is produced when natural amethyst is heated or irradiated. Most consumers are not familiar with prasiolite, and for that reason it is not often seen in commercial jewelry. The amethyst and prasiolite in this photo were both cut from material mined in Brazil.

Prasiolite is a yellow-green to green variety of quartz that is cut into faceted stones for use in jewelry or purchased by gemstone collectors. It is produced by the three processes described below:

Heat-Treated Amethyst: Most prasiolite is produced by heating natural amethyst in a laboratory oven to about 500 degrees Celsius. This heating changes the amethyst's color from purple to green or yellowish green. [1]

Irradiated Amethyst: A small amount of prasiolite is produced by irradiating natural amethyst. This produces prasiolite with a light green color. The green color is often unstable and can fade to colorless if the stone is exposed to temperatures over about 150 degrees Celsius.

Naturally Heated Amethyst: Another small amount of amethyst is heated by natural processes. It is found where an amethyst-bearing rock unit has been heated by younger lava flows or nearby intrusions.

Federal Trade Commission: Proposal to add a section to the FTC Guides for the Jewelry, Precious Metals, Pewter Industries to state that it is unfair or deceptive to describe a product with an incorrect varietal name - specifically using "green amethyst" as an example. Enlarge image. FTC Source (see page 7).

What is Green Amethyst?

In July 2018, the Federal Trade Commission of the United States published a new edition of their Guides for the Jewelry, Precious Metals, and Pewter Industries.

Origin and Pronunciation of Prasiolite

The name "prasiolite" is derived from two Greek words: prason, which means "leek" and lithos, which means "stone." Other names used for prasiolite are "praseolite" and "praziolite." It is pronounced "PRAYS-ee-oh-light." 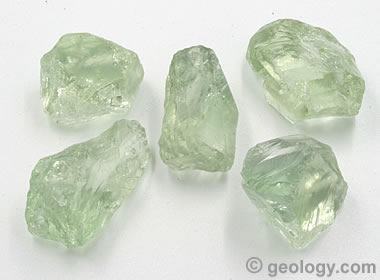 The purple color of amethyst is caused by trace amounts of iron or iron mineral inclusions within the quartz. This color is stable under most conditions at Earth’s surface. However, if it is heated to high temperatures, the color can change.

Most amethyst turns yellow when heated to about 470 degrees Celsius, then to a dark yellow or reddish brown at about 550 degrees. [1] These materials are sold as heat-treated citrine.

Only a few amethyst localities in the world are known to have amethyst that converts to prasiolite upon heating. Most prasiolite entering the gem market today is made by heating amethyst and yellow quartz from the Montezuma deposit in Minas Gerais, Brazil. An amethyst deposit in Arizona also contains material that can be heat-treated to prasiolite. [1] Some amethyst found in Poland can be irradiated to produce prasiolite. [4]

A small amount of prasiolite is produced by natural heating of amethyst. This natural prasiolite is rare and is not currently an important source of material for the gemstone market.

An interesting deposit near Susanville, California has amethyst, citrine, and prasiolite in talus. This talus is at the base of a steep exposure of metavolcanic basalts and andesites. The amethyst in this deposit formed in the cavities of a solidified lava flow.

Other deposits of natually green quartz that have been called prasiolite have been found in the Sokolowiec, Kaczawskie, and Lower Silesia areas of Poland. The color of the quartz is thought to be derived from iron ions within the quartz crystal structure. Some of this green quartz occurs as crystals in amygdules, and some occurs as a central crystalline zone in agate nodules. [4]

As a variety of quartz, prasiolite has a Mohs hardness of seven and does not have cleavage. It is a durable stone, with the same wearing properties as amethyst, citrine, smoky quartz, or rose quartz. It is suitable for use in almost any type of jewelry including rings, bracelets, pendants, earrings, pins, beads, and more.

Much of the prasiolite sold today is light in color and saturation. Small stones barely show their color because their saturation is so light. Stones of a few carats in size are normally the ones that exhibit a rich green color.

Care and Storage of Prasiolite

Prasiolite produced by heat treatment should be stored with care. When exposed to strong sunlight and some types of artificial light for long periods of time, the green color can fade. People who own prasiolite gemstones and jewelry can protect their gems by storing them in darkness. A dark jewelry box, cabinet, or bag can provide protection.

Prasiolite should also be protected from heat. It should not be stored near a source of heat in the home. It should not be left in cars that will be heated by the sun. If a piece of prasiolite jewelry is being repaired, the stone should be removed from the metal setting to protect it from heat during soldering and heating. Sellers should explain proper storage methods to every person who purchases prasiolite. Some sellers and buyers are unaware of the gem’s fragile color.

Synthetic quartz in a wide range of green colors is produced in laboratories around the world by the hydrothermal method. Some synthetic green quartz has a leek-green color similar to prasiolite. This synthetic quartz often enters the gem market as rough, cabochons, beads, and faceted stones.

Some of this synthetic quartz is sold at prices that are low enough to reveal its identity. It is also probable that some green synthetic quartz is being sold as prasiolite without disclosure. Buyers should be cautious in transactions and purchase only from trusted sellers.

Chrysoprase and green aventurine are other green varieties of quartz that are commonly for sold as rough, gemstones, or in jewelry. Chrysoprase is a translucent variety of chalcedony with a bright yellowish green color that derives its color from small amounts of nickel. Its translucence and bright yellowish green color are helpful for distinguishing it from prasiolite.

Aventurine occurs in a variety of colors, of which green is the most common. Green aventurine is translucent to transparent and derives its green color from tiny reflective inclusions of fuchsite, a green chromium-rich mica. The sparkling appearance of the mica grains in the material are a good way of distinguishing it from prasiolite.

Quartz is one of the most frequently dyed gem materials, and some of that dyed material is green. Dyed materials can often be detected because dye tends to concentrate in fractures, cavities, and permeable zones within the material. Dyes are often soluble in water or mild solvents, which is sometimes a revealing test, which should only be done on unimportant specimens.

Is Treating Amethyst to Produce Prasiolite a Bad Thing?

Most of the colored stones sold in the gem market place and many diamonds have some treatments done to improve their appearance and color. Most rubies and sapphires are heated to dissolve inclusions, improve clarity, and modify their color. Many fine sapphires were originally yellow pebbles, and then heated to produce a rich blue color. Most of the world’s best tanzanite is a brownish piece of zoisite when brought from the Earth. Many diamonds are drilled to bleach or remove small inclusions, coated to improve their apparent color, or irradiated to give them a distinct color.

Treatments are common, accepted, and often welcome in the finest types of gems. The important part of treatment is informing the buyer about what has been done. If that information is shared, then the buyer knows the work that has been done to improve the stone’s appearance. It also reveals that the color is not natural, which can change a gem's value.