The second most valuable variety of chalcedony. 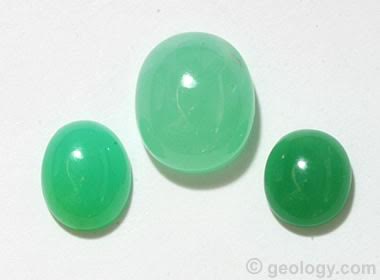 Chrysoprase is the name of a translucent chalcedony that ranges in color between yellowish green and green. Its green color is usually caused by traces of nickel. Beautiful green chrysoprase is the second most valuable variety of chalcedony after gem silica.

The name "chrysoprase" is from the Greek words for "golden apple" or "golden leek." Today it is most often used for making beads and cabochons. Exceptional pieces of chrysoprase are sometimes cut into translucent faceted stones.

Chrysoprase as a gemstone was known to the ancient Greeks and Romans. A few pieces have been found among their artifacts, but its use in that time was not common. Chrysoprase first became a popular gem in Europe after deposits in Poland were discovered in the 1700s. Today, most chrysoprase is produced in Australia, but it is not widely used because supplies are limited. 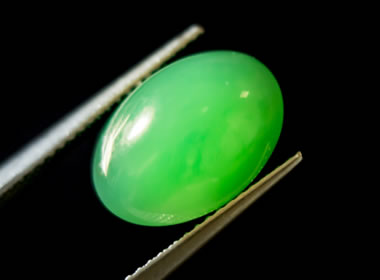 The color of chrysoprase is mainly determined by its nickel content; however, the nickel can occur within the microcrystalline quartz in multiple ways. Small amounts of nickel silicate admixed with the quartz, dispersed nickel oxide, and free nickel ions might all contribute to the green color of chrysoprase. The nickel is not believed to enter the lattice of the microcrystalline quartz.

Chrysoprase occurs in a range of green colors. These range from a pale yellowish green to a deeply saturated green. The abundance of nickel determines the strength of the green color. Pale yellowish green specimens can contain between 0.2 and 1.0 weight percent nickel oxide. Deep green specimens can contain up to 5 weight percent nickel oxide.

The color in some specimens of chrysoprase is unstable. Prolonged exposure to sunlight can cause it to fade. If faded specimens are found at the surface in the field, better color might be found just below the surface. Heat can also cause color fading in chrysoprase. Care should be taken during jewelry repair to avoid heating the stone. Cut stones and gem materials should not be stored or displayed where they will be exposed to direct sunlight or heat. A box, drawer, or jewelry cabinet, stored away from heat sources, can provide protection. 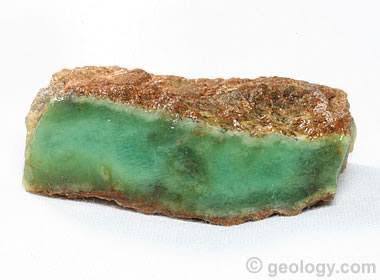 Chrysoprase Rough: A piece of vein-filling chrysoprase with wall-rock attached on bottom and top. Most chrysoprase is found as a vein or fracture filling in peridotite, dunite, or serpentinite. These fractures are rarely more than a few inches across, which limits the size of the rough. The fracture where this material came from was about two centimeters wide.

Geology and Distribution of Chrysoprase

Chrysoprase deposits occur at shallow depths in areas where nickel-bearing rocks have been weathered. There it is found as cavity, vein, and fracture fillings. Veins and fractures are usually under a few inches in width and rarely exceed several feet in length. Chrysoprase is mined by the kilogram and not by the ton.

Chrysoprase is usually found within or associated with peridotite, dunite, and serpentinite. These rocks are often part of an ophiolite or a subduction zone. The nickel that produces the green color of chrysoprase is liberated as these rocks are weathered.

Much of the world's early chrysoprase was produced from surface and underground workings at the Szklary deposit in Poland. Mining began there in the Middle Ages and continued intermittently until 1980, with renewed activity at the site starting in 2010.

Australia is the leading producer of chrysoprase today. Much of the best chrysoprase is mined in the Marlborough Creek District of Queensland, Australia. Many other deposits are worked in New South Wales, South Australia, and Western Australia. Chrysoprase is also found in other parts of the world. These include Kazakhstan, the Czech Republic, Brazil, Tanzania, India, Slovakia, Russia, and California.

Position in the Gem Market

Although chrysoprase is a highly valued variety of chalcedony, it is rarely seen in the gem and jewelry market. Thus, it is out-of-mind with the average jewelry shopper. It is rarely seen in commercial jewelry because stones of consistent color and calibrated sizes are difficult to obtain in large quantities. Chrysoprase is most often seen in stores and on websites that sell designer, limited production, or one-of-a-kind jewelry items. 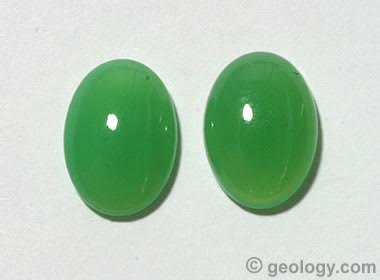 Dyed Green Chalcedony: A pair of cabochons with a spectacular color that look like fine chrysoprase or jade. The author purchased them on Etsy where they were listed as "chrysoprase," but the item description indicated that they were "dyed." Should they be called "chrysoprase" if they were light gray chalcedony that was dyed green? How about if they were originally green, but green dye was used to improve their color?

Be careful if you are shopping for chrysoprase. Many vendors believe that any green chalcedony is "chrysoprase" -- even if it has been dyed. Dyed materials often have a near-perfect appearance and a consistent green color. Genuine chrysoprase usually exhibits some variation in color, saturation, or diaphaneity. It also often contains included materials. So, if a necklace described as "chrysoprase" has beads of perfect clarity, identical color, identical saturation, and identical diaphaneity, then the beads are either imitation, dyed, or of fantastic quality.

While writing this article, the author visited popular online auction and craft seller websites. Many cabochons and beaded necklaces with perfect color, saturation, clarity, and diaphaneity were listed as "chrysoprase." No mention of "dye" appeared in the item description. When asked by private message or email, "are these beads dyed?" the sellers usually responded "yes."

Mtorolite: A dark green, nearly opaque chalcedony that obtains its green color from chromium is found in Zimbabwe. There it is called "mtorolite."

There are many other varieties of green chalcedony. The best-known is bloodstone, a dark green opaque chalcedony with bright red markings. Bloodstone (also known as heliotrope) does not have the same yellow-green color of chrysoprase, and the color is not produced by nickel.

Dark green chalcedony colored by chromium is produced today in Zimbabwe. There it is known as mtorolite. Similar material produced in Bolivia is locally known as chiquitanita. These materials are typically a much darker grayish green and are nearly opaque when compared to chrysoprase. They do not have the same pleasing green color.

Plasma is an opaque variety of green chalcedony. Similar to bloodstone, it is a green chalcedony, but splashed with yellow markings, instead of red. Plasma often has a very attractive appearance. Dark green jasper splashed with many colors, such as yellow, white, and red, are often called fancy jasper.

"Prase" is a name used for almost any green or greenish quartz. The name is ancient and was used in many ways. Opaque green jasper, translucent green chalcedony, and transparent green crystalline quartz have all been referred to as prase over at least two millennia. 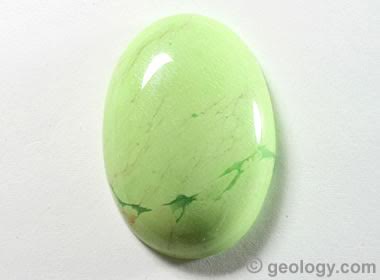 Lemon Magnesite: Milky, yellow-green magnesite has been sold worldwide for the past few decades as "citron chrysoprase" or "lemon chrysoprase." That name is usually inappropriate, but it has become embedded within the lapidary language. Chrysoprase and green magnesite are often found in the same deposits, and many specimens are a mix of the two materials.

Another material with a "chrysoprase" name is an attractive milky green rock composed mainly of magnesite, a magnesium carbonate mineral. It forms where serpentine is weathered or altered by hydrothermal activity. This opaque material is usually called "citron chrysoprase" or "lemon chrysoprase" because of its citrus color. A better name for this material would be "lemon magnesite" or "citron magnesite." Unfortunately, the "chrysoprase" name has been used for this material worldwide for a few decades. Extracting it from the language of the lapidary trade would probably be impossible or would take generations.