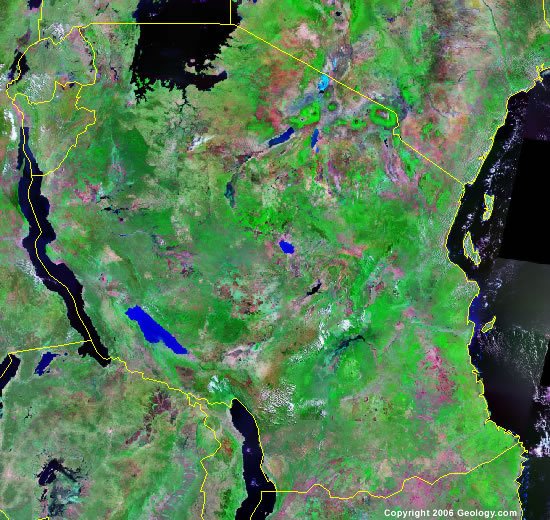 Google Earth is a free program from Google that allows you to explore satellite images showing the cities and landscapes of Tanzania and all of Africa in fantastic detail. It works on your desktop computer, tablet, or mobile phone. The images in many areas are detailed enough that you can see houses, vehicles and even people on a city street. Google Earth is free and easy-to-use.

Tanzanite is a popular blue gemstone that was discovered in Tanzania in the 1960s. It was first marketed by Tiffany and Company, who named it after the country in which it was found. To date, all of the world's commercial Tanzanite production is from a small area of about eight square miles in the Merelani Hills, near the base of Mount Kilimanjaro.

Tsavorite is a bright green variety of grossularite garnet that was discovered in the mountains of northeast Tanzania in 1967. It is one of the most valuable and rare varieties of garnet. It was first marketed by Tiffany and Company and named after the Tsavo East National Park of Kenya, where the first commercial mining occurred.

Tanzania is located along the East African Rift System, a divergent plate boundary where the eastern horn of Africa is separating from the rest of the continent. Lake Tanganyika and Lake Malawi, which form part of Tanzania's western boundary, mark the trend of the rift in this area. 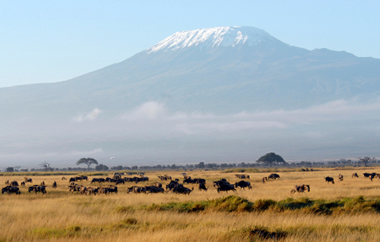 Mount Kilimanjaro, the highest mountain in Africa, is located in Tanzania. The mountain is near the equator, yet it is high enough to maintain a snow cap. Its summit is 19,340 feet (5,895 meters) above sea level.

A Top Producer of Diamonds:

Tanzania is one of the world's top producers of diamonds, and in recent years it has been one of the top ten producers. Much of this production is from the Williamson Diamond Mine, located near the community of Mwazui. Creative commons image by Hansueli Krapf.

Several major natural gas discoveries have been made in the Indian Ocean off the coast of Tanzania since 2010. Plans are being made to develop these fields, use some of the gas domestically, but export most of it in the form of liquefied natural gas.

Tanzania is one of the few commercial producers of aventurine, a variety of quartz that has numerous aligned inclusions of platy reflective minerals. When the stone is moved under a light, these inclusions simultaneously reflect the light to produce a phenomenon known as aventurescence.

Actinolite is a gem rarely seen in jewelry stores. It sometimes exhibits the property of chatoyance, also known as "cat's-eye". It is an interesting gem. The pair of round cat's-eye cabochons above were cut from actinolite mined in Tanzania.

Tanzania on a World Wall Map:

Tanzania is one of nearly 200 countries illustrated on our Blue Ocean Laminated Map of the World. This map shows a combination of political and physical features. It includes country boundaries, major cities, major mountains in shaded relief, ocean depth in blue color gradient, along with many other features. This is a great map for students, schools, offices and anywhere that a nice map of the world is needed for education, display or decor.

Tanzania On a Large Wall Map of Africa:

If you are interested in Tanzania and the geography of Africa our large laminated map of Africa might be just what you need. It is a large political map of Africa that also shows many of the continent's physical features in color or shaded relief. Major lakes, rivers,cities, roads, country boundaries, coastlines and surrounding islands are all shown on the map.

Tanzania has several sources of fuel, some of which are hydropower, coal and natural gas. Other commercial natural resources for this country include phosphates, tin, iron ore, nickel, gold, gemstones and diamonds.

There is flooding on the central plateau of Tanzania during the rainy season. Other natural hazards for this country include droughts.

There are a number of environmental issues in Tanzania. Issues regarding the land include deforestation, soil degradation, and desertification. The wildlife is threatened by illegal hunting and trade, especially for ivory. Marine habitats are threatened by water pollution and the destruction of coral reefs.