A group of ultramafic rocks, including Kimberlite. They sometimes contain chromite or diamonds. 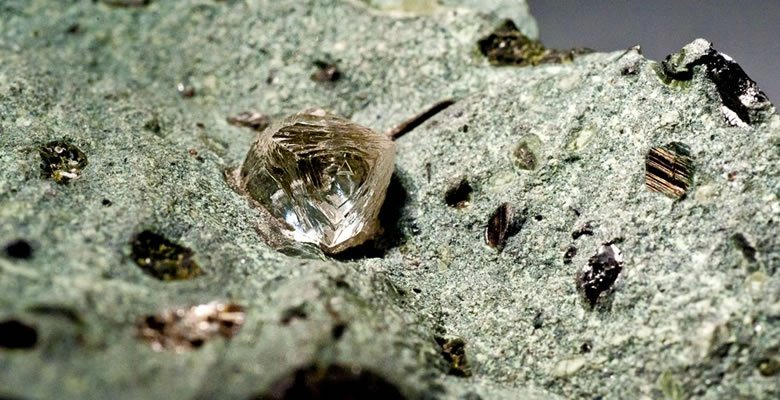 Kimberlite with diamond: Kimberlite, the rock that is found in many diamond pipes, is a variety of peridotite. The specimen above is a piece of kimberlite with numerous visible grains of phlogopite and a six millimeter octahedral diamond crystal of about 1.8 carats. This specimen is from the Finsch Diamond Mine in South Africa. Wikimedia photo by StrangerThanKindness used here under a Creative Commons License. 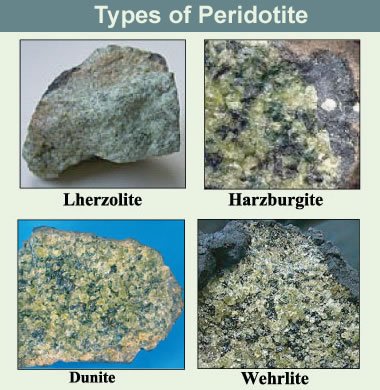 Types of peridotite: Peridotite is a generic name for a number of different rock types. All of them are rich in olivine and mafic minerals. They are usually green in color and have a high specific gravity for a nonmetallic material. Shown above are specimens of lherzolite, harzburgite, dunite, and wehrlite. Image by USGS.

Peridotite is a generic name used for coarse-grained, dark-colored, ultramafic igneous rocks. Peridotites usually contain olivine as their primary mineral, frequently with other mafic minerals such as pyroxenes and amphiboles. Their silica content is low compared to other igneous rocks, and they contain very little quartz and feldspar.

Peridotites are economically important rocks because they often contain chromite - the only ore of chromium; they can be source rocks for diamonds; and, they have the potential to be used as a material for sequestering carbon dioxide. Much of Earth's mantle is believed to be composed of peridotite. 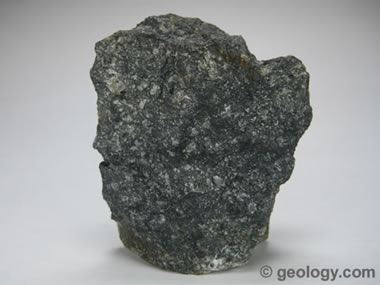 Peridotite: The specimen shown is about two inches (five centimeters) across.

Many Types of Peridotite

The peridotite "family" contains a number of different intrusive igneous rocks. These include lherzolite, harzburgite, dunite, wehrlite, and kimberlite (see photos). Most of them have an obvious green color, attributed to their olivine content.

Video: Ancient Rocks, Modern Problem The mantle rocks that formed the Hajar mountains in Oman could be used to help reduce excess carbon dioxide in the atmosphere.

Peridotite is a rock type that is more representative of Earth’s mantle than of the crust. The minerals that compose it are generally high-temperature minerals that are unstable at Earth’s surface. They are quickly altered by hydrothermal solutions and weathering. Those that contain magnesium-oxide-bearing minerals can alter to form carbonates, such as magnesite or calcite, which are much more stable at Earth's surface. Alteration of other peridotites forms serpentinite, chlorite, and talc. 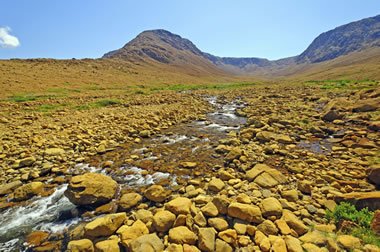 The Tablelands: One of the few extensive surface exposures of peridotite is an area known as "The Tablelands" in Gros Morne National Park, Newfoundland. This area is the mantle portion of a large slab of oceanic lithosphere that was overthrust onto continental lithosphere. These rocks from the mantle lack the nutrients required to support most types of plants, and the soils that form from them are usually barren. The brownish color is from iron staining. Image copyright iStockphoto / Wildnerdpix. 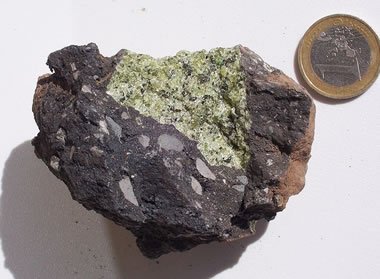 Peridotite Xenolith: This photograph is of a volcanic bomb that contains a peridotite (dunite) xenolith composed almost entirely of olivine. Photo by Woudloper, used here under a Creative Commons License.

Earth's mantle is thought to be composed mainly of peridotite. Some of the occurrences of peridotite on Earth's surface are thought to be rocks from the mantle that have been brought up from depth by deep-source magmas. Ophiolites and pipes are two structures that have brought mantle peridotite to the surface. Peridotite is also found in the igneous rocks of sills and dikes.

Ophiolites: An ophiolite is a large slab of oceanic crust, including part of the mantle, that has been overthrust onto continental crust at a convergent plate boundary. These structures bring large masses of peridotite up to Earth's surface and offer a rare opportunity to examine rocks from the mantle. Studies of ophiolites have helped geologists better understand the mantle, the process of seafloor spreading, and the formation of oceanic lithosphere.

Pipes: A pipe is a vertical intrusive structure that forms when a deep-source volcanic eruption brings magma up from the mantle. The magma often breaks through the surface, producing an explosive eruption and a steep-walled crater known as a maar.

These deep-source eruptions are the origin for most of the Earth's primary diamond deposits. The magma that forms the pipe is thought to ascend rapidly from the mantle, tearing rocks free from the mantle and from the walls of the pipe. These pieces of foreign rock are known as "xenoliths." The diamonds are found in the xenoliths and in the residual material produced by their weathering. Xenoliths provide the only way that diamonds can ascend from the mantle to the surface without being melted or corroded by the hot magma.

Dikes and Sills: Dikes and sills are intrusive igneous rock bodies. Some of them are composed of peridotite that was sourced from deep within the Earth. When they are exposed by erosion, they provide another way that peridotite from great depth can be observed at Earth's surface. 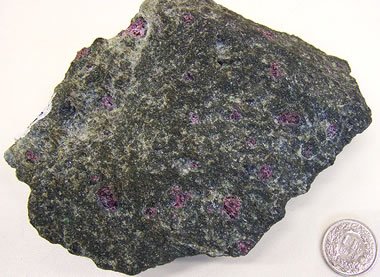 Garnet peridotite: A specimen of garnet peridotite from Alpe Arami, near Bellinzona, Switzerland. Certain types of garnet, along with chromite and ilmenite, can be indicator minerals for diamond prospecting. Public domain image by Woudloper.


The formation of diamonds requires very high temperatures and pressures that only occur on Earth at depths of 100 miles below the surface and at locations in the mantle where temperatures are at least 2000 degrees Fahrenheit. The diamonds are delivered to the surface in pieces of rock, known as xenoliths, which are torn from the mantle by deep-source volcanic eruptions. When the mantle material approaches the surface, an explosive eruption occurs that forms a pipe-shaped structure that might be several hundred yards to over a mile in diameter. These "pipes," the rocks that are blasted from them, and the sediments and soils produced by their weathering are the source for most of Earth's natural diamonds.

Some peridotites contain significant amounts of chromite. Some of these form when a subsurface magma slowly crystallizes. During the early stages of crystallization, the highest-temperature minerals such as olivine, orthopyroxene, clinopyroxene, and chromite begin to crystallize from the melt. The crystals are heavier than the melt and sink to the bottom of the melt. These high-temperature minerals can form layers of peridotite on the bottom of the magma body. This can form a layered deposit where up to 50% of the rock can be chromite. These are known as "stratiform deposits." Most of the world's chromite is contained in two stratiform deposits: the Bushveld Complex in South Africa and the Great Dyke in Zimbabwe.

Another type of chromite deposit occurs where tectonic forces push large masses of oceanic lithosphere up onto a continental plate in a structure that is known as an "ophiolite." These ophiolites contain significant amounts of chromite and are called "podiform deposits." 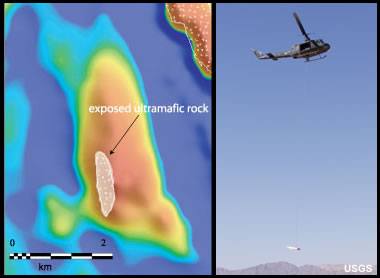 Aeromagnetic prospecting: Finding small bodies of peridotite such as a kimberlite pipe can be very difficult because they are so small. Aeromagnetic surveys are sometimes employed to find them. The geographic areas underlain by peridotite will often be a magnetic anomaly in contrast to their surrounding rocks. Images by the United States Geological Survey.

Peridotite bodies exposed at Earth's surface are rapidly attacked by weathering. They can then be obscured by soil, sediment, glacial till, and vegetation. Finding a peridotite body as small as a kimberlite pipe, which might be only a few hundred yards across, can be very difficult. Because peridotite often has magnetic properties that are distinctly different from the surrounding rocks, a magnetic survey can sometimes be used to locate them. The survey can be conducted using an aircraft that slowly tows a magnetometer at low altitudes, recording the magnetic intensity as it travels. The magnetic data can be plotted on a map, often revealing the location of the pipe as an anomaly. (See map and photo.)

Peridotite bodies are also found by prospecting for some of the rare minerals that they contain. When a peridotite weathers, the olivine breaks down, quickly leaving the more resistant minerals behind. Geologists have located peridotite bodies by prospecting for chromite, garnet, and other resistant indicator minerals. When scattered by the action of water, wind, or ice, they will be most highly concentrated near the pipe and be diluted by local rock debris with distance. The grains of these minerals might also be more rounded with distance of transport. This allows geologists to use the "trail-to-lode" prospecting method to find them.