A spectacular gem mineral confused with ruby and sapphire for over 1000 years.

Red and blue spinel: Spinel occurs in a wide variety of colors. The bright reds and deep blues can be spectacular specimens. It is easy to understand how early gem traders confused spinel with ruby and sapphire for over 1000 years. Specimens and photos by Arkenstone / www.iRocks.com. 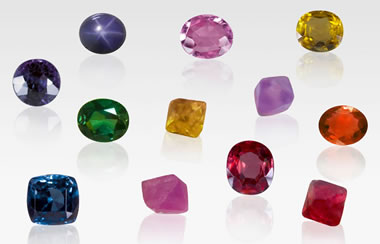 Spinel - The World's Most Underappreciated Gem? Spinel occurs in colors that span the entire spectrum, and it is also one of the world's most durable and lustrous gems. Recently named as a modern birthstone, spinel's popularity is growing rapidly. It could be the world's most overlooked gem. Photos by Greg C. Grace / Alamy Stock Photo.

The name "spinel" is used three different ways in geology and gemology:

1) The name of a mineral: spinel is the name of a magnesium aluminum oxide mineral with a composition of MgAl2O4 and an isometric crystal structure.

2) The name of a gem: spinel is the name of a valuable gem that serves as a birthstone for the month of August.

3) The name of a mineral group: spinel is the name of a group of metal oxide minerals with a common crystal structure. 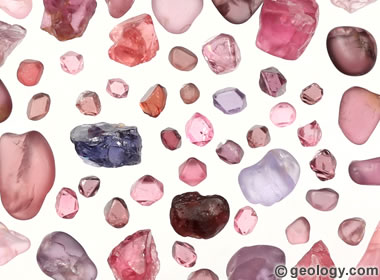 Alluvial spinel: Much of the spinel used to produce gemstones is obtained from alluvial deposits. These deposits are worked with minimal mechanization in many parts of the world. Workers wash stream sediment and visually search through the coarse sand to fine gravel fraction, looking for colorful mineral grains that might be of value. The photo above shows some alluvial spinel produced in Vietnam. Some of the particles are thoroughly worn into rounded pebbles. Others have experienced so little transport that they still have sharp crystal edges and unworn faces. The deep red piece of spinel in the lower center of the image measures 7 millimeters by 5 millimeters.

Spinel is an oxide mineral with a composition of MgAl2O4 and an isometric crystal structure. It is often found in octahedral crystals. It has a Mohs hardness of 8, a high tenacity, and a specific gravity between 3.5 and 3.61.

Spinel is typically found in three geologic situations: 1) as crystals in marbles or dolomites that have been subjected to contact metamorphism; 2) as irregularly shaped grains in basic igneous rocks; and, 3) as water-worn crystals and pebbles in alluvial deposits.

Spinel is very resistant to chemical and physical weathering. So when it occurs in marble, dolomite, or igneous rocks that weather easily, crystals of spinel are liberated as the rock is weathered. The spinel crystals are then transported downslope by mass wasting or running water. This places spinel in alluvial deposits, where it is concentrated because of its high specific gravity. These alluvial deposits have been worked by gem miners for over 1000 years.

Most spinels of a "ruby-red color" are produced from alluvial deposits in Sri Lanka, Thailand, Cambodia, Vietnam, and Myanmar. Other countries where spinel is mined include Afghanistan, Nepal, Tajikistan, Australia, Madagascar, Nigeria, and Tanzania. 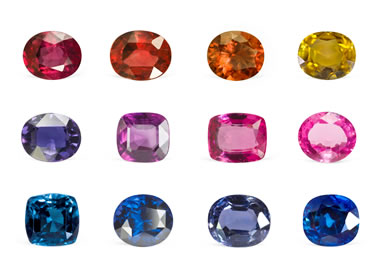 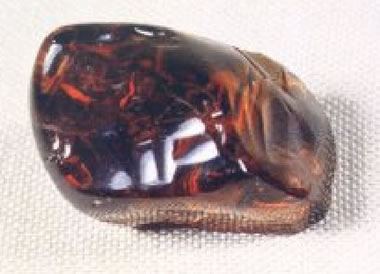 Samarian Spinel: Photo of the Samarian Spinel, the largest known spinel in the world and part of the Iranian Crown Jewels. It weighs approximately 500 carats. It bears an inscription dating to the mid-1600s attributing its ownership to Jehangir, the Mogul Emperor of India. It was taken from India in the early 1700s, during the Afsharid Conquest. [4] Public domain image.

The only significant use of spinel is as a gemstone. However, in that use it is spectacular. Spinel excels in color, luster, hardness, and durability. It is appropriate for almost any use in jewelry.

Spinel occurs in colors that span the spectrum: red, pink, orange, yellow, green, blue, violet, and purple. White, black, gray and colorless specimens are also found. Three colors are especially popular: red and blue (the colors that imitate ruby and sapphire), and an orange-red color known as "flame spinel." Starting in the 2020s, an unusual interest in gray spinel began.

Gem-quality red and blue spinels are very rare. They are much less abundant than rubies and sapphires of similar quality and color. Even with equivalent beauty and greater rarity, their prices are much lower than ruby and sapphire.

The lower price is an example of how rarity has not set the price. Spinel is not as valuable because it is not as popular. Spinel has not been strongly promoted by the gem and jewelry trade because its supply is limited and unreliable.

Occasionally an exceptional spinel or a jewelry item of historical significance is sold at auction for a very high price. One necklace containing eleven bright red spinels, totaling 1,132 carats and inscribed by Mughal emperors, sold for over $5 million. [6, photo]

Many authors link the tradition of associating a birthstone with each month of the year to Aaron's breastplate of the Bible's Book of Exodus. Others link it to customs from 16th century Germany [9] and 18th century Poland [10].

In July 2016, spinel was named a new birthstone for the month of August by the American Gem Trade Association and the Jewelers of America. Before then, peridot served as the August birthstone. Now both spinel and peridot will share the designation. This event and continued promotion of monthly birthstones will bring significant attention to spinel, which occurs in a variety of colors. Consumers will now have a spectrum of choices beyond the yellow-green color of peridot.

The name "spinel" is also used for a broad group of metal oxide minerals with a generalized chemical composition of XY2O4.

Examples of spinel group minerals include gahnite, magnetite, franklinite, chromite, chrysoberyl, and columbite-tantalite, as shown in the accompanying chart. 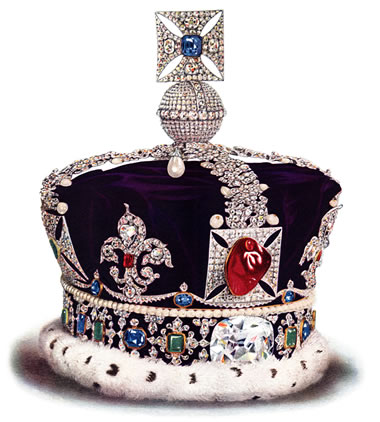 The World's Most Famous Spinel: "The Black Prince's Ruby" is actually a red spinel. It was mounted as the primary focal stone of the Imperial State Crown - part of the Crown Jewels of the United Kingdom. This illustration was created by Cyril Davenport in 1919. 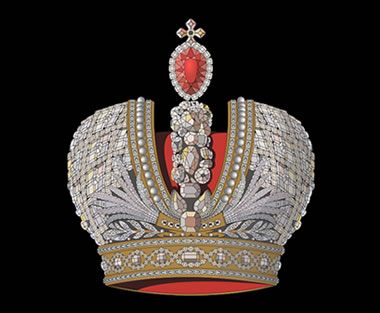 Crown of Catherine the Great: The Great Imperial Crown was made for Empress Catherine II the Great's Coronation in 1762. The large red stone at the crest of the crown is the second-largest known spinel, weighing 398 carats. It has been titled: "Catherine the Great's Ruby." [5] Creative Commons image by Hugo Gerard Ströhl.

The Ruby and Sapphire Impostor

Spinel is a gem that has been confused with ruby and sapphire for over 1000 years. Several of the most spectacular spinels ever discovered were mounted as "crown jewels" and other "jewelry of significance" under the assumption that they were rubies or sapphires. 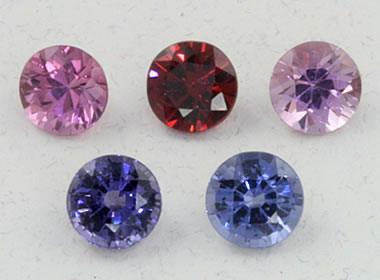 Faceted spinel: Several pretty facet-cut spinels. It is easy to see how spinel can be confused with ruby and sapphire or used as an alternative stone. These spinels are about 4 1/2 millimeters in size and weigh a little less than 1/2 carat each. The top three red and pink stones were cut from material mined in Myanmar. Deep red spinel is rarer than ruby but sells at a fraction of the price. The blue stones below them were cut from material mined in Tanzania.

Two thousand years ago, gem traders did not know that spinel and corundum (the mineral of ruby and sapphire) have different chemical compositions and different crystal structures. Instead, gem traders thought that every bright red gemstone was a "ruby" and every deep blue gemstone was a "sapphire." As a result, lots of red spinels are now in very important jewelry collections based on their incorrect identification as a ruby.

The most famous example of a spinel being identified as a ruby is a 170-carat bright red spinel named "The Black Prince's Ruby." The first known owner of this beautiful stone was Abu Sa'id, the Moorish Prince of Granada, in the 14th century. The stone passed through several owners and eventually made its way into the Imperial State Crown of the United Kingdom, where it is mounted immediately above the famous Cullinan II diamond. [1, photo]

The "Timur Ruby" is a 352.5-carat bright red spinel that is currently in a necklace of The Royal Collection that was made for Queen Victoria in 1853. The stone was found in Afghanistan and is inscribed with the names and dates of its owners back to 1612. It was part of a group of spinels from the Lahore Treasure presented to Queen Victoria by the East India Company in 1849. [2]

Today gemologists understand that there are significant differences between spinel and corundum (the mineral of ruby and sapphire). The diagnostic differences are summarized in the chart on this page. Optical properties can also be used to distinguish spinel from corundum.

Gem traders in Myanmar were the first to recognize spinel as being distinctly different from ruby in the late 1500s. [3] In Europe, spinel continued to be misidentified as ruby until the mid-1800s. 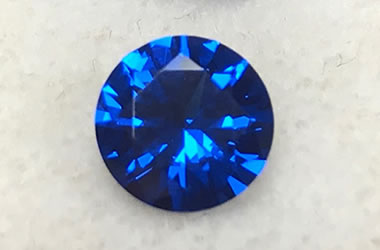 In the 1930s synthetic spinels in a wide variety of colors were produced to imitate popular gemstones such as aquamarine, zircon, tourmaline, emerald, chrysoberyl, sapphire, and ruby. The colors were produced by introducing metals in trace amounts into the stone by the addition of: cobalt oxide (blue), manganese (yellow), chromium oxide (green), and iron (pink). Careful chemical procedures allowed the manufacturers to closely control the color of the stones. [8]

These colored synthetic spinels were given trade names such as "Tourmaline Green" and "Cobalt Blue," mounted in inexpensive settings, and sold as "birthstone" jewelry. [8] These synthetic stones are the first encounter with spinel for many of the consumers who purchase them. Millions of synthetic spinel birthstone jewelry sets consisting of a ring, pendant, and earrings have been sold.

In addition to its use in jewelry, synthetic spinel is also used as a refractory. It is used to produce heat-resistant coatings on metal tools and as an additive in making refractory bricks and ceramics.