A non-foliated metamorphic rock formed when limestone is altered by heat and pressure. 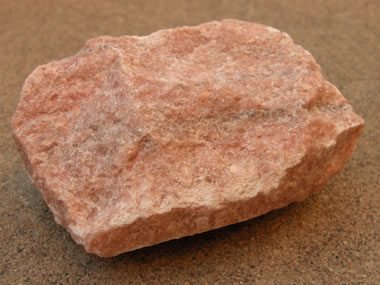 Pink Marble: A piece of pink marble about four inches (ten centimeters) across. The pink color is most likely derived from iron. Image by NASA.

Marble is a metamorphic rock that forms when limestone is subjected to the heat and pressure of metamorphism. It is composed primarily of the mineral calcite (CaCO3) and usually contains other minerals, such as clay minerals, micas, quartz, pyrite, iron oxides, and graphite.

Under the conditions of metamorphism, the calcite in the limestone recrystallizes to form a rock that is a mass of interlocking calcite crystals. A related rock, dolomitic marble, is produced when dolostone is subjected to heat and pressure.

Photo Gallery:   The Many Uses of Marble 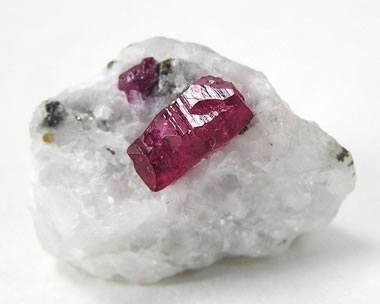 Ruby in Marble: Marble is often the host rock for corundum, spinel, and other gem minerals. This specimen is a piece of white marble with a large red ruby crystal from Afghanistan. Specimen is about 1 1/4 inches across (about 3 centimeters). Specimen and photo by Arkenstone / www.iRocks.com.

How Does Marble Form?

The transformation of limestone into marble usually occurs at convergent plate boundaries where large areas of Earth's crust are exposed to the heat and pressure of regional metamorphism. Some marble also forms by contact metamorphism when a hot magma body heats adjacent limestone or dolostone. This process also occurs at convergent plate boundaries

Before metamorphism, the calcite in the limestone is often in the form of lithified fossil material and biological debris. During metamorphism, this calcite recrystallizes and the texture of the rock changes.

In the early stages of the limestone-to-marble transformation, the calcite crystals in the rock are very small. In a freshly-broken hand specimen, they might only be recognized as a sugary sparkle of light reflecting from their tiny cleavage faces when the rock is played in the light.

As metamorphism progresses, the crystals grow larger and become easily recognizable as interlocking crystals of calcite. Recrystallization obscures the original fossils and sedimentary structures of the limestone. It also occurs without forming foliation, which normally is found in rocks that are altered by the directed pressure of a convergent plate boundary.

Recrystallization is what marks the separation between limestone and marble. Marble that has been exposed to low levels of metamorphism will have very small calcite crystals. The crystals usually grow in size and as the level of metamorphism progresses.

Clay minerals within the marble will alter to micas and more complex silicate structures as the level of metamorphism increases. Some might contribute to the formation of gem minerals such as corundum - the mineral of ruby and sapphire. 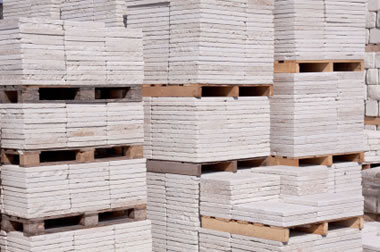 Physical Properties and Uses of Marble

Marble occurs in large deposits that can be hundreds of feet thick and geographically extensive. This allows it to be economically mined on a large scale, with some mines and quarries producing millions of tons per year.

Most marble is made into either crushed stone or dimension stone. Crushed stone is used as an aggregate in highways, railroad beds, building foundations, and other types of construction.

Dimension stone is produced by sawing marble into pieces of specific dimensions. These are used in monuments, buildings, sculptures, paving and other projects. We have an article about "the uses of marble" that includes photos and descriptions of marble in many types of uses. 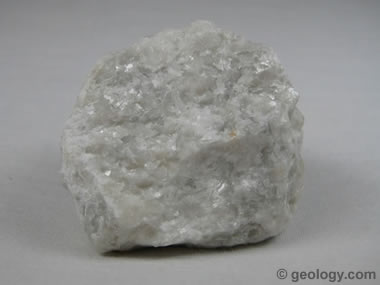 Gray Marble: This specimen has calcite cleavage faces up to several millimeters in size that are reflecting light. The specimen is about two inches (five centimeters) across. 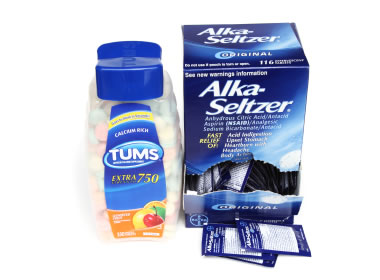 Calcium carbonate medicines: Marble is composed of calcium carbonate. That makes it very effective at neutralizing acids. Highest purity marble is often crushed to a powder, processed to remove impurities, and then used to make products such as Tums and Alka-Seltzer that are used for the treatment of acid indigestion. Crushed marble is also used to reduce the acid content of soils, the acid levels of streams, and as an acid-neutralizing material in the chemical industry. Photo copyright iStockphoto / NoDerog.


Color:   Marble is usually a light-colored rock. When it is formed from a limestone with very few impurities, it will be white in color. Marble that contains impurities such as clay minerals, iron oxides, or bituminous material can be bluish, gray, pink, yellow, or black in color.

Marble of extremely high purity with a bright white color is very useful. It is often mined, crushed to a powder, and then processed to remove as many impurities as possible. The resulting product is called "whiting." This powder is used as a coloring agent and filler in paint, whitewash, putty, plastic, grout, cosmetics, paper, and other manufactured products.

Acid Reaction:   Being composed of calcium carbonate, marble will react in contact with many acids, neutralizing the acid. It is one of the most effective acid neutralization materials. Marble is often crushed and used for acid neutralization in streams, lakes, and soils.

It is used for acid neutralization in the chemical industry as well. Pharmaceutical antacid medicines such as "Tums" contain calcium carbonate, which is sometimes made from powdered marble. These medicines are helpful to people who suffer from acid reflux or acid indigestion. Powdered marble is used as an inert filler in other pills.

Hardness:   Being composed of calcite, marble has a hardness of three on the Mohs hardness scale. As a result, marble is easy to carve, and that makes it useful for producing sculptures and ornamental objects. The translucence of marble makes it especially attractive for many types of sculptures.

The low hardness and solubility of marble allows it to be used as a calcium additive in animal feeds. Calcium additives are especially important for dairy cows and egg-producing chickens. It is also used as a low-hardness abrasive for scrubbing bathroom and kitchen fixtures.

Ability to Accept a Polish:   After being sanded with progressively finer abrasives, marble can be polished to a high luster. This allows attractive pieces of marble to be cut, polished, and used as floor tiles, architectural panels, facing stone, window sills, stair treads, columns, and many other pieces of decorative stone.

Another Definition of Marble

The name "marble" is used in a different way in the dimension stone trade. Any crystalline carbonate rock that has an ability to accept a polish is called "marble." The name is sometimes used for other soft rocks such as travertine, verd antique, serpentine, and some limestones.