Its nickname is "Fool's Gold," but it often contains a surprising amount of gold! 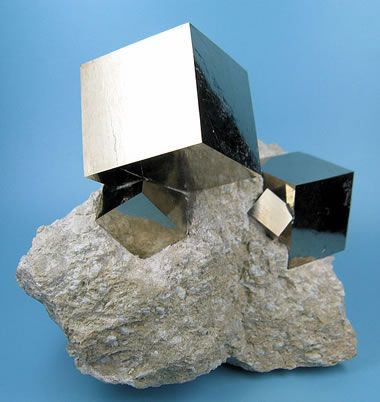 Pyrite Crystals: Cubic crystals of pyrite on a marlstone from Navajún, Rioja, Spain. Specimen is approximately 4 inches (9.5 centimeters) across. Image by Carles Millan and used under a Creative Commons license.

Pyrite is a brass-yellow mineral with a bright metallic luster. It has a chemical composition of iron sulfide (FeS2) and is the most common sulfide mineral. It forms at high and low temperatures and occurs, usually in small quantities, in igneous, metamorphic, and sedimentary rocks worldwide. Pyrite is so common that many geologists would consider it to be a ubiquitous mineral.

The name "pyrite" is after the Greek "pyr" meaning "fire." This name was given because pyrite can be used to create the sparks needed for starting a fire if it is struck against metal or another hard material. Pieces of pyrite have also been used as a spark-producing material in flintlock firearms.

Pyrite has a nickname that has become famous - "Fool's Gold." The mineral's gold color, metallic luster, and high specific gravity often cause it to be mistaken for gold by inexperienced prospectors. However, pyrite is often associated with gold. The two minerals often form together, and in some deposits pyrite contains enough included gold to warrant mining.

Hand specimens of pyrite are usually easy to identify. The mineral always has a brass-yellow color, a metallic luster and a high specific gravity. It is harder than other yellow metallic minerals, and its streak is black, usually with a tinge of green. It often occurs in well-formed crystals in the shape of cubes, octahedrons, or pyritohedrons, which often have striated faces.

The only common mineral that has properties similar to pyrite is marcasite, a dimorph of pyrite with the same chemical composition but an orthorhombic crystal structure. Marcasite does not have the same brassy yellow color of pyrite. Instead it is a pale brass color, sometimes with a slight tint of green. Marcasite is more brittle than pyrite and also has a slightly lower specific gravity at 4.8. 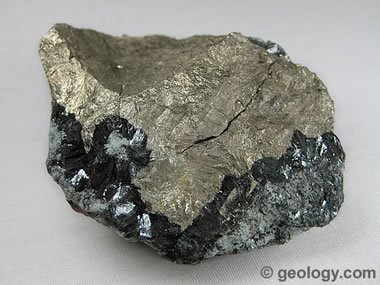 Pyrite With Hematite: Pyrite with hematite from Rio Marina, Isle of Elba, Italy. Specimen is approximately 3 inches (7.6 centimeters) across.

Pyrite and gold can easily be distinguished. Gold is very soft and will bend or dent with pin pressure. Pyrite is brittle, and thin pieces will break with pin pressure. Gold leaves a yellow streak, while pyrite's streak is greenish black. Gold also has a much higher specific gravity. A little careful testing will help you avoid the "Fool's Gold" problem. 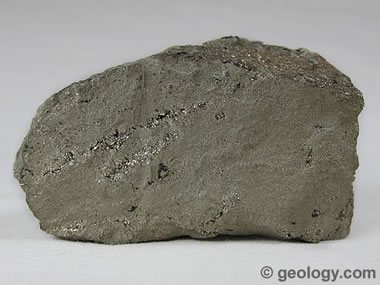 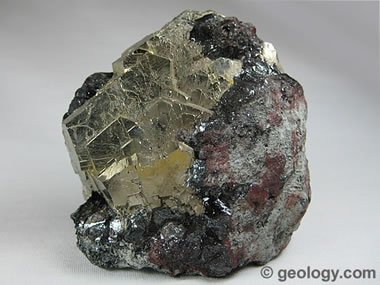 Pyrite is composed of iron and sulfur; however, the mineral does not serve as an important source of either of these elements. Iron is typically obtained from oxide ores such as hematite and magnetite. These ores occur in much larger accumulations, the iron is easier to extract and the metal is not contaminated with sulfur, which reduces its strength.

Pyrite is occasionally used as a gemstone. It is fashioned into beads, cut into cabochons, faceted, and carved into shapes. This type of jewelry was popular in the United States and Europe in the mid- to late-1800s. Most of the jewelry stones were called "marcasite," but they are actually pyrite. (Marcasite would be a poor choice for jewelry because it quickly oxidizes, and the oxidation products cause damage to anything that they contact. Pyrite is not an excellent jewelry stone because it easily tarnishes.)

Pyrite as an Ore of Gold

The most important use of pyrite is as an ore of gold. Gold and pyrite form under similar conditions and occur together in the same rocks. In some deposits small amounts of gold occur as inclusions and substitutions within pyrite.

Some pyrites can contain 0.25% gold by weight or more. Although this is a tiny fraction of the ore, the value of gold is so high that the pyrite might be a worthwhile mining target. If pyrite contains 0.25% gold and the gold price is $1500 per troy ounce, then one ton of pyrite will contain about 73 troy ounces of gold worth over $109,000. That is not a guaranteed money-maker. It depends upon how efficiently the gold can be recovered and the cost of the recovery process. 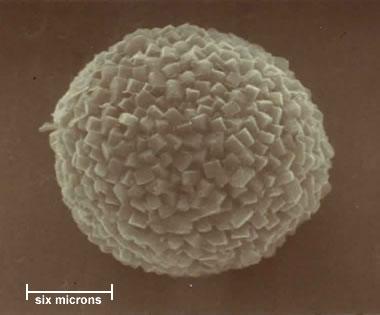 Pyrite Framboid: One of the most interesting crystal habits of pyrite is the "framboid." These tiny spheres of euhedral pyrite crystals are often found in organic muds, coal, shale, and other types of rocks. This is a framboid from the Waynesburg coal of northern West Virginia. It is a sphere about 15 microns in diameter that is composed of cubic crystals of pyrite about one micron on a side.

Sulfur occurs in coal in three different forms: 1) organic sulfur, 2) sulfate minerals, and 3) sulfide minerals (mostly pyrite with minor amounts of marcasite). When the coal is burned, these forms of sulfur are converted into sulfur dioxide gas and contribute to air pollution and acid rain unless they are removed from the emissions. The sulfide mineral content of the coal can be reduced by heavy mineral separation, but this removal is expensive, results in a loss of coal, and cannot be done with 100% efficiency.

The sulfide minerals in coal and its surrounding rocks can produce acid mine drainage. Before mining, these minerals are deep within the ground and below the water table where they are not subject to oxidation. During and after mining the level of the water table often falls, exposing the sulfides to oxidation. This oxidation produces acid mine drainage which contaminates groundwater and streams. Mining also breaks the rocks above and below the coal. This creates more pathways for the movement of oxygenated waters and exposes more surface area to oxidation. 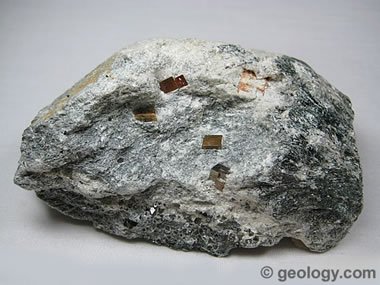 Crushed stone used to make concrete, concrete block, and asphalt paving materials must be free of pyrite. Pyrite will oxidize when it is exposed to air and moisture. That oxidation will result in the production of acids and a volume change that will damage the concrete and reduce its strength. This damage can result in failure or maintenance problems.

Pyrite should not be present in the base material, subsoil or bedrock under roads, parking lots, or buildings. Oxidation of pyrite can result in damage to pavement, foundations, and floors. In parts of the country where pyrite is commonly found, construction sites should be tested to detect the presence of pyritic materials. If pyrite is detected, the site can be rejected or the problem materials can be excavated and replaced with quality fill. 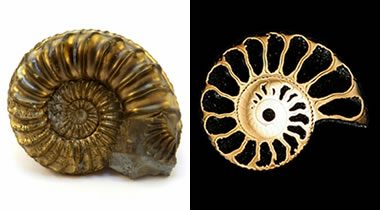 The conditions of pyrite formation in the sedimentary environment include a supply of iron, a supply of sulfur, and an oxygen-poor environment. This often occurs in association with decaying organic materials. Organic decay consumes oxygen and releases sulfur. For this reason, pyrite commonly and preferentially occurs in dark-colored organic-rich sediments such as coal and black shale. The pyrite often replaces organic materials such as plant debris and shells to create interesting fossils composed of pyrite.