The primary ore of iron, a mineral used in heavy media separation, and a recorder of Earth magnetism 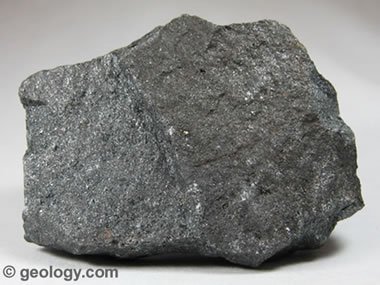 Magnetite: A typical magnetite specimen exhibiting a gray metallic luster. This specimen is approximately 10 centimeters across.

Magnetite is a very common iron oxide (Fe3O4) mineral that is found in igneous, metamorphic, and sedimentary rocks. It is the most commonly mined ore of iron. It is also the mineral with the highest iron content (72.4%).

Magnetite is very easy to identify. It is one of just a few minerals that are attracted to a common magnet. It is a black, opaque, submetallic to metallic mineral with a Mohs hardness between 5 and 6.5. It is often found in the form of isometric crystals. It is the most strongly magnetic mineral found in nature.

Pyrrhotite is the second most common magnetic mineral. It can easily be identified by its magnetic properties, lower hardness, and bronze color. 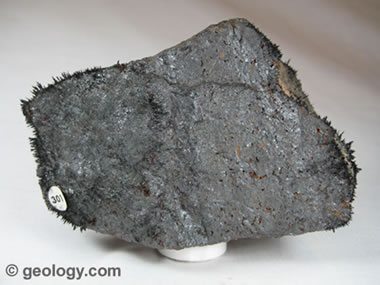 Lodestone: A specimen of lodestone that has attracted numerous tiny particles of iron. This specimen is approximately 10 centimeters across. 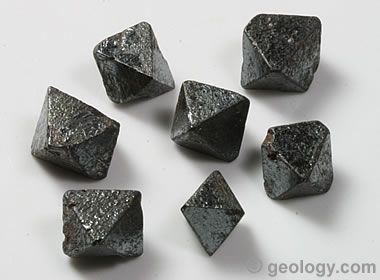 Magnetite Crystals: Octahedral crystals are a common crystal habit of magnetite. They are often seen in igneous and metamorphic rocks and sometimes seen in sediments near the magnetite source area. The magnetite crystals in this photo are about eight to twelve millimeters in maximum dimension. 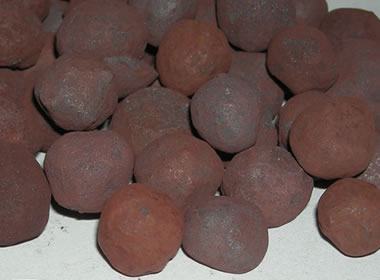 Taconite pellets: These red spheres are taconite pellets that are ready to ship to a steel mill. The pellets are approximately 10 millimeters in diameter. Creative Commons photo by Harvey Henkelmann.

Use of Magnetite as an Ore of Iron

Most of the iron ore mined today is a banded sedimentary rock known as taconite that contains a mixture of magnetite, hematite, and chert. Once considered a waste material, taconite became an important ore after higher grade deposits were depleted. Today's commercial taconites contain 25 to 30% iron by weight.

At the mine site, the taconite ore is ground to a fine powder, and strong magnets are used to separate magnetically susceptible particles containing magnetite and hematite from the chert. The concentrate is then mixed with small amounts of limestone and clay, then rolled into small round pellets. These pellets are easy to handle and transport by ship, rail, or truck. They can be directly loaded into a blast furnace at a mill and be used to produce iron or steel.

Use of Magnetite as a Heavy Media 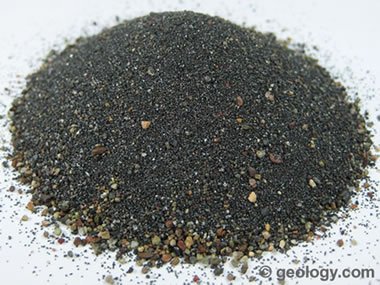 Magnetite sand: Some beach and river sands contain high concentrations of magnetite. Magnetite-rich "black sands" are commonly encountered by people panning for gold. Although magnetite sands and other heavy mineral accumulations are common, they are infrequently developed as mineral deposits because their size or grade is inadequate. The pile in the photo is approximately four inches (10 centimeters) across.

Use of Magnetite as an Abrasive

Some finely ground magnetite is also used as an abrasive in waterjet cutting. In the past few decades, synthetic abrasives have filled many of the applications where magnetite was previously used.

Other Uses of Magnetite

Small amounts of magnetite are also used as a toner in electrophotography, as a micronutrient in fertilizers, as a pigment in paints, and as an aggregate in high-density concrete.

Tiny crystals of magnetite are present in many rocks. In the crystallization of an igneous rock, tiny crystals of magnetite form in the melt, and because they are magnetic, they orient themselves with the direction and polarity of Earth's magnetic field. This preserves the orientation of Earth's magnetic field within the rock at the moment of crystallization.

Today, geologists can study the magnetic properties of rocks of various age and reconstruct the history of change in Earth's magnetic field. This information is available for multiple locations on multiple continents. It can also be used to learn about plate tectonics and the movement of continents over time.

A similar orientation of tiny magnetite grains occurs in the settling of sediment particles, locking clues to Earth's magnetic history into some sedimentary rocks.