What Is Coal and How Does It Form? 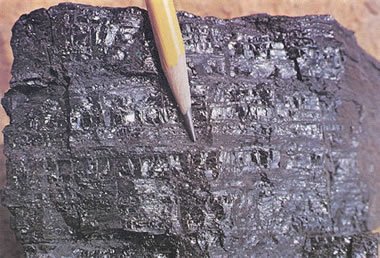 Bituminous Coal: Bituminous coal is typically a banded sedimentary rock. In this photo you can see bright and dull bands of coal material oriented horizontally across the specimen. The bright bands are well-preserved woody material, such as branches or stems. The dull bands can contain mineral material washed into the swamp by streams, charcoal produced by fires in the swamp, or degraded plant materials. This specimen is approximately three inches across (7.5 centimeters). Photo by the West Virginia Geological and Economic Survey.

Coal is an organic sedimentary rock that forms from the accumulation and preservation of plant materials, usually in a swamp environment. Coal is a combustible rock and, along with oil and natural gas, it is one of the three most important fossil fuels. Coal has a wide range of uses; the most important use is for the generation of electricity. 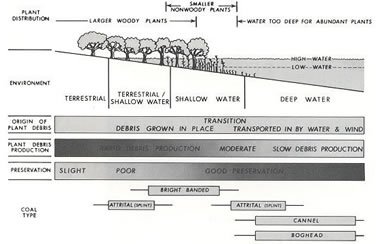 Coal-Forming Environments: A generalized diagram of a swamp, showing how water depth, preservation conditions, plant types, and plant productivity can vary in different parts of the swamp. These variations will yield different types of coal. Illustration by the West Virginia Geological and Economic Survey. 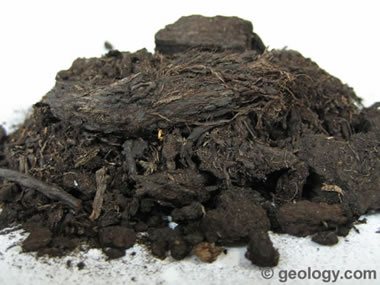 Peat: A mass of recently accumulated to partially carbonized plant debris. This material is on its way to becoming coal, but its plant debris source is still easily recognizable.

How Does Coal Form?

Coal forms from the accumulation of plant debris, usually in a swamp environment. When a plant dies and falls into the swamp, the standing water of the swamp protects it from decay. Swamp waters are usually deficient in oxygen, which would react with the plant debris and cause it to decay. This lack of oxygen allows the plant debris to persist. In addition, insects and other organisms that might consume the plant debris on land do not survive well under water in an oxygen-deficient environment.

For a coal seam to form, perfect conditions of plant debris accumulation and perfect conditions of subsidence must occur on a landscape that maintains this perfect balance for a very long time. It is easy to understand why the conditions for forming coal have occurred only a small number of times throughout Earth's history. The formation of a coal requires the coincidence of highly improbable events. 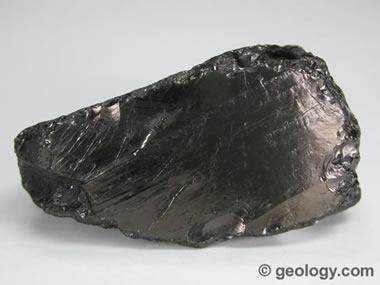 Anthracite coal: Anthracite is the highest rank of coal. It has a bright luster and breaks with a semi-conchoidal fracture.

What is Coal "Rank"?

Plant debris is a fragile material compared to the mineral materials that make up other rocks. As plant debris is exposed to the heat and pressure of burial, it changes in composition and properties. The "rank" of a coal is a measure of how much change has occurred. Sometimes the term "organic metamorphism" is used for this change.

Based upon composition and properties, coals are assigned to a rank progression that corresponds to their level of organic metamorphism. The basic rank progression is summarized in the table here. 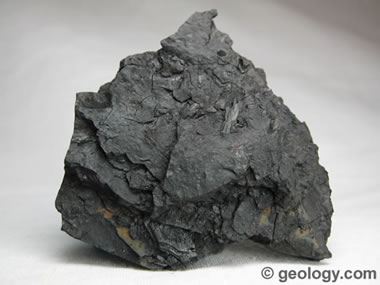 Lignite: The lowest rank of coal is "lignite." It is peat that has been compressed, dewatered, and lithified into a rock. It often contains recognizable plant structures.

What are the Uses of Coal? 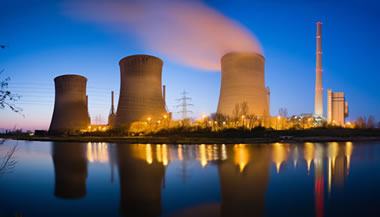 Coal-Fired Power Plant: Photo of a power plant where coal is burned to produce electricity. The three large stacks are cooling towers where water used in the electricity generation process is cooled before reuse or release to the environment. The emission streaming from the right-most stack is water vapor. The combustion products from burning the coal are released into the tall, thin stack on the right. Within that stack are a variety of chemical sorbents to absorb polluting gases produced during the combustion process. Image copyright iStockphoto / Michael Utech.

Coal has many other uses. It is used as a source of heat for manufacturing processes. For example, bricks and cement are produced in kilns heated by the combustion of a jet of powdered coal. Coal is also used as a power source for factories. There it is used to heat steam, and the steam is used to drive mechanical devices. A few decades ago most coal was used for space heating. Some coal is still used that way, but other fuels and coal-produced electricity are now used instead.

Coke production remains an important use of coal. Coke is produced by heating coal under controlled conditions in the absence of air. This drives off some of the volatile materials and concentrates the carbon content. Coke is then used as a high-carbon fuel for metal processing and other uses where an especially hot-burning flame is needed.

Coal is also used in manufacturing. If coal is heated the gases, tars, and residues produced can be used in a number of manufacturing processes. Plastics, roofing, linoleum, synthetic rubber, insecticides, paint products, medicines, solvents, and synthetic fibers all include some coal-derived compounds. Coal can also be converted into liquid and gaseous fuels; however, these uses of coal are mainly experimental and done on a small scale.