Learn about the minerals and rocks that "glow" under ultraviolet light 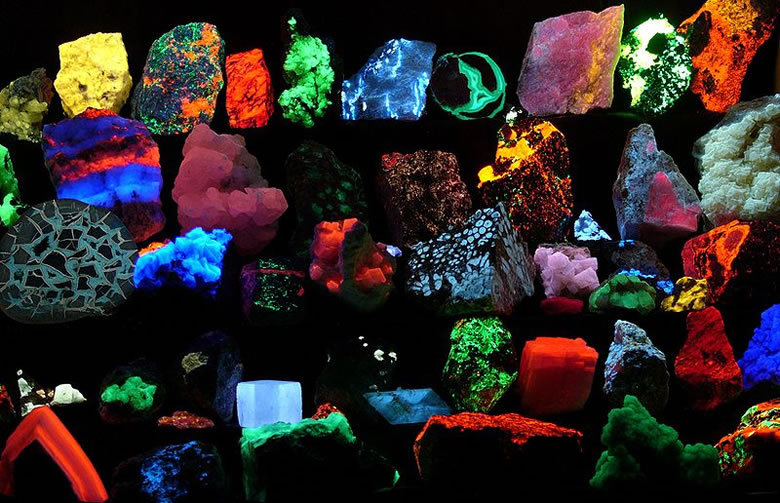 Fluorescent minerals: One of the most spectacular museum exhibits is a dark room filled with fluorescent rocks and minerals that are illuminated with ultraviolet light. They glow with an amazing array of vibrant colors - in sharp contrast to the color of the rocks under conditions of normal illumination. The ultraviolet light activates these minerals and causes them to temporarily emit visible light of various colors. This light emission is known as "fluorescence." The wonderful photograph above shows a collection of fluorescent minerals. It was created by Dr. Hannes Grobe and is part of the Wikimedia Commons collection. The photo is used here under a Creative Commons license. 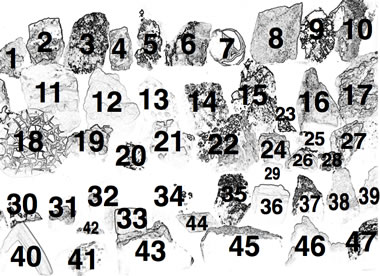 What is a Fluorescent Mineral?

The color change of fluorescent minerals is most spectacular when they are illuminated in darkness by ultraviolet light (which is not visible to humans) and they release visible light. The photograph above is an example of this phenomenon.

How fluorescence works: Diagram that shows how photons and electrons interact to produce the fluorescence phenomenon.

Fluorescence in minerals occurs when a specimen is illuminated with specific wavelengths of light. Ultraviolet (UV) light, x-rays, and cathode rays are the typical types of light that trigger fluorescence. These types of light have the ability to excite susceptible electrons within the atomic structure of the mineral. These excited electrons temporarily jump up to a higher orbital within the mineral's atomic structure. When those electrons fall back down to their original orbital, a small amount of energy is released in the form of light. This release of light is known as fluorescence. [1]

How Many Minerals Fluoresce in UV Light?

Most minerals do not have a noticeable fluorescence. Only about 15% of minerals have a fluorescence that is visible to people, and some specimens of those minerals will not fluoresce. [2] Fluorescence usually occurs when specific impurities known as "activators" are present within the mineral. These activators are typically cations of metals such as: tungsten, molybdenum, lead, boron, titanium, manganese, uranium, and chromium. Rare earth elements such as europium, terbium, dysprosium, and yttrium are also known to contribute to the fluorescence phenomenon. Fluorescence can also be caused by crystal structural defects or organic impurities.

Most minerals fluoresce a single color. Other minerals have multiple colors of fluorescence. Calcite has been known to fluoresce red, blue, white, pink, green, and orange. Some minerals are known to exhibit multiple colors of fluorescence in a single specimen. These can be banded minerals that exhibit several stages of growth from parent solutions with changing compositions. Many minerals fluoresce one color under shortwave UV light and another color under longwave UV light. 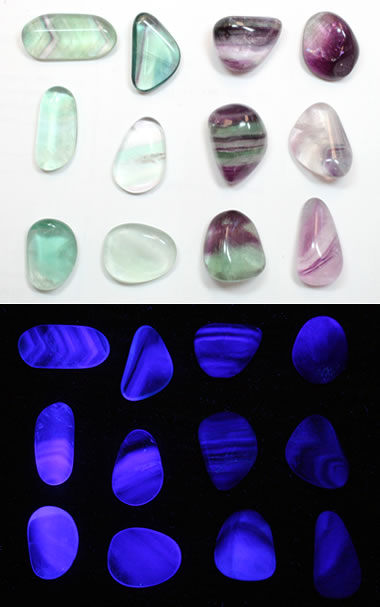 Fluorite: Tumble-polished specimens of fluorite in normal light (top) and under shortwave ultraviolet light (bottom). The fluorescence appears to be related to the color and banding structure of the minerals in plain light, which could be related to their chemical composition.

One of the first people to observe fluorescence in minerals was George Gabriel Stokes in 1852. He noted the ability of fluorite to produce a blue glow when illuminated with invisible light "beyond the violet end of the spectrum." He called this phenomenon "fluorescence" after the mineral fluorite. The name has gained wide acceptance in mineralogy, gemology, biology, optics, commercial lighting and many other fields.

Many specimens of fluorite have a strong enough fluorescence that the observer can take them outside, hold them in sunlight, then move them into shade and see a color change. Only a few minerals have this level of fluorescence. Fluorite typically glows a blue-violet color under shortwave and longwave light. Some specimens are known to glow a cream or white color. Many specimens do not fluoresce. Fluorescence in fluorite is thought to be caused by the presence of yttrium, europium, samarium [3] or organic material as activators. 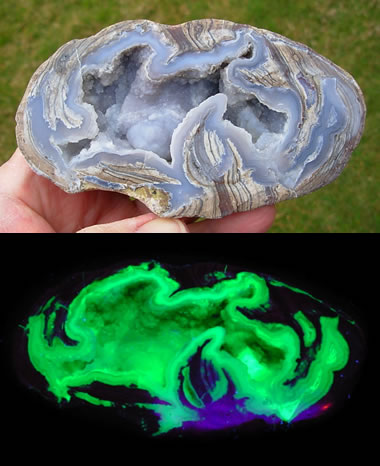 You might be surprised to learn that some people have found geodes with fluorescent minerals inside. Some of the Dugway geodes, found near the community of Dugway, Utah, are lined with chalcedony that produces a lime-green fluorescence caused by trace amounts of uranium.

Dugway geodes are amazing for another reason. They formed several million years ago in the gas pockets of a rhyolite bed. Then, about 20,000 years ago they were eroded by wave action along the shoreline of a glacial lake and transported several miles to where they finally came to rest in lake sediments. [4] Today, people dig them up and add them to geode and fluorescent mineral collections. 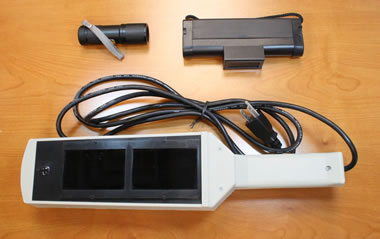 UV lamps: Three hobbyist-grade ultraviolet lamps used for fluorescent mineral viewing. At top left is a small "flashlight" style lamp that produces longwave UV light and is small enough to easily fit in a pocket. At top right is a small portable shortwave lamp. The lamp at bottom produces both longwave and shortwave light. The two windows are thick glass filters that eliminate visible light. The larger lamp is strong enough to use in taking photographs. UV-blocking glasses or goggles should always be worn when working with a UV lamp.

The lamps used to locate and study fluorescent minerals are very different from the ultraviolet lamps (called "black lights") sold in novelty stores. The novelty store lamps are not suitable for mineral studies for two reasons: 1) they emit longwave ultraviolet light (most fluorescent minerals respond to shortwave ultraviolet); and, 2) they emit a significant amount of visible light which interferes with accurate observation, but is not a problem for novelty use. [5]

Scientific-grade lamps are produced in a variety of different wavelengths. The table above lists the wavelength ranges that are most often used for fluorescent mineral studies and their common abbreviations.

The scientific-grade lamps used for mineral studies have a filter that allows UV wavelengths to pass but blocks most visible light that will interfere with observation. These filters are expensive and are partly responsible for the high cost of scientific lamps.

Fluorescent spodumene: This spodumene (gem-variety kunzite) provides at least three important lessons in mineral fluorescence. All three photos show the same scatter of specimens. The top is in normal light, the center is in shortwave ultraviolet, and the bottom is in longwave ultraviolet. Lessons: 1) a single mineral can fluoresce with different colors; 2) the fluorescence can be different colors under shortwave and longwave light; and, 3) some specimens of a mineral will not fluoresce.

Small UV lamps with just a few watts of power are safe for short periods of use. The user should not look into the lamp, shine the lamp directly onto the skin, or shine the lamp towards the face of a person or pet. Looking into the lamp can cause serious eye injury. Shining a UV lamp onto your skin can cause "sunburn."

The safety procedures of UV lamps used for fluorescent mineral studies should not be confused with those provided with the "blacklights" sold at party and novelty stores. "Blacklights" emit low-intensity longwave UV radiation. The shortwave UV radiation produced by a mineral study lamp contains the wavelengths associated with sunburn and eye injury. This is why mineral study lamps should be used with eye protection and handled more carefully than "blacklights."

UV lamps used to illuminate large mineral displays or used for outdoor field work have much higher voltages than the small UV lamps used for specimen examination by students. Eye protection and clothing that covers the arms, legs, feet and hands should be worn when using a high-voltage lamp. [6] 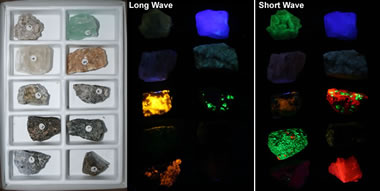 Fluorescence has practical uses in mining, gemology, petrology, and mineralogy. The mineral scheelite, an ore of tungsten, typically has a bright blue fluorescence. Geologists prospecting for scheelite and other fluorescent minerals sometimes search for them at night with ultraviolet lamps.

Geologists in the oil and gas industry sometimes examine drill cuttings and cores with UV lamps. Small amounts of oil in the pore spaces of the rock and mineral grains stained by oil will fluoresce under UV illumination. The color of the fluorescence can indicate the thermal maturity of the oil, with darker colors indicating heavier oils and lighter colors indicating lighter oils.

Fluorescent lamps can be used in underground mines to identify and trace ore-bearing rocks. They have also been used on picking lines to quickly spot valuable pieces of ore and separate them from waste.

In the early 1900s many diamond merchants would seek out stones with a strong blue fluorescence. They believed that these stones would appear more colorless (less yellow) when viewed in light with a high ultraviolet content. This eventually resulted in controlled lighting conditions for color grading diamonds. [7]

Fluorescence is not routinely used in mineral identification. Most minerals are not fluorescent, and the property is unpredictable. Calcite provides a good example. Some calcite does not fluoresce. Specimens of calcite that do fluoresce glow in a variety of colors, including red, blue, white, pink, green, and orange. Fluorescence is rarely a diagnostic property. 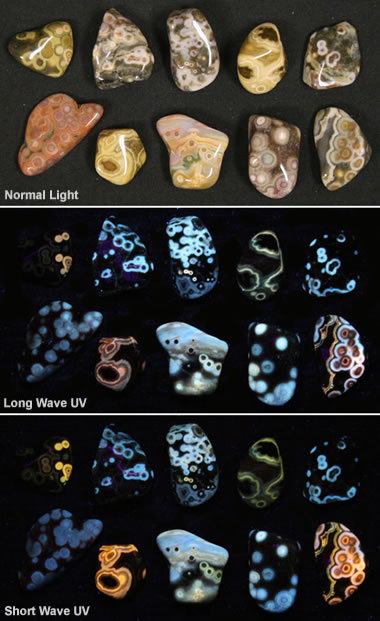 Fluorescent ocean jasper: This image shows some pieces of tumbled ocean jasper under normal light (top), longwave ultraviolet (center), and shortwave ultraviolet (bottom). It shows how materials respond to different types of light. Specimens and photos by RockTumbler.com, a partner site of Geology.com.

In fluorescence, electrons excited by incoming photons jump up to a higher energy level and remain there for a tiny fraction of a second before falling back to the ground state and emitting fluorescent light. In phosphorescence, the electrons remain in the excited state orbital for a greater amount of time before falling. Minerals with fluorescence stop glowing when the light source is turned off. Minerals with phosphorescence can glow for a brief time after the light source is turned off. Minerals that are sometimes phosphorescent include calcite, celestite, colemanite, fluorite, sphalerite, and willemite.

Thermoluminescence is the ability of a mineral to emit a small amount of light upon being heated. This heating might be to temperatures as low as 50 to 200 degrees Celsius - much lower than the temperature of incandescence. Apatite, calcite, chlorophane, fluorite, lepidolite, scapolite, and some feldspars are occasionally thermoluminescent.

Some minerals will emit light when mechanical energy is applied to them. These minerals glow when they are struck, crushed, scratched, or broken. This light is a result of bonds being broken within the mineral structure. The amount of light emitted is very small, and careful observation in the dark is often required. Minerals that sometimes display triboluminescence include amblygonite, calcite, fluorite, lepidolite, pectolite, quartz, sphalerite, and some feldspars.