A pink to purple mica, a source of lithium, an ornamental stone, a gem material. 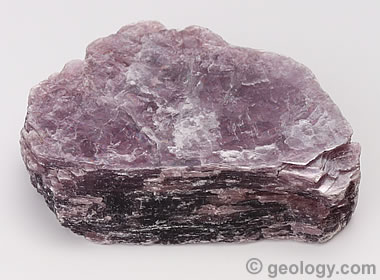 Lepidolite Mica: This photo shows how lepidolite mica occurs in stacks of sheets, sometimes referred to as "books". This photo also shows a typical purplish pink color exhibited by the mineral, its perfect cleavage in one direction, and its pearly to vitreous luster.

Lepidolite is the name of a rare lithium-rich mica mineral that is usually pink, red, or purple in color. It is the most common lithium-bearing mineral and serves as a minor ore of lithium metal, with rubidium and cesium sometimes being byproducts. When impregnated with quartz, lepidolite is used as a minor gemstone. Flakes of lepidolite are sometimes responsible for the color of pink and red aventurine. 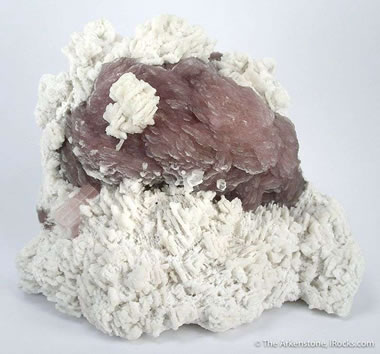 Lepidolite on Albite: This photograph shows a cluster of purplish-pink lepidolite crystals on a base of white albite. A small crystal of pink tourmaline can be seen on the left side of the specimen, beneath the lepidolite. This specimen is from Pech, Kunar Province, Afghanistan and measures approximately 14.7 x 11.5 x 7.6 centimeters in size. Specimen and photo by Arkenstone / www.iRocks.com. 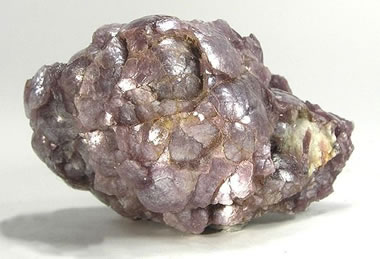 Lepidolite in Curved Sheets: This photograph shows a cluster of grayish purple lepidolite crystals that have a curved, layered habit instead of the typical flat book habit. This specimen is from Minas Gerais, Southeastern Region, Brazil and measures approximately 6.1 x 3.7 x 2.7 centimeters in size. Specimen and photo by Arkenstone / www.iRocks.com.

Lepidolite can only form in geochemical environments where high concentrations of lithium are available for mineral formation. Lepidolite is a rare mineral because these geochemical situations rarely occur.

The lithium ion is very small, and it does not readily substitute in other minerals. As a result, it is usually one of the last ions to form minerals during the crystallization of a subsurface magma. As other ions are depleted, the residual fluids of magma crystallization become progressively enriched with lithium.

During the final stages of crystallization, there might finally be a high enough concentration of lithium present to form discrete lithium minerals such as spodumene, lepidolite, and petalite. Elbaite tourmaline is another lithium-bearing mineral that forms in association with lepidolite and other lithium minerals. Other associated minerals include: beryl, cassiterite, cleavelandite, muscovite, quartz, topaz, and a variety of feldspar minerals.

Pegmatites, greisens, and hydrothermal quartz veins are rocks of late-stage magmatic crystallization. They are the rocks where much of the world’s lithium minerals are found. In these rocks, lepidolite occurs as disseminated particles, aggregates of fine grains, “books” of flat sheets, and aggregates of curved sheets. Most deposits of lithium-bearing minerals formed by igneous processes are small pod-shaped deposits of a few hundred to a few thousand tons where hand mining and hand separation are required. 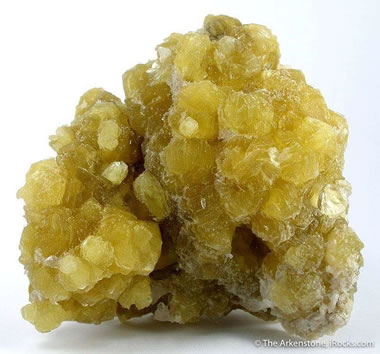 Rare Yellow Lepidolite: Most lepidolite is in the color range from pinkish to reddish to purplish. Rare specimens can be colorless or yellow. In this specimen translucent crystals of yellow lepidolite are seen in a rosette habit. The specimen is from Itinga, Minas Gerais, Brazil and measures approximately 10.2 x 9.9 x 6.7 centimeters in size. Specimen and photo by Arkenstone / www.iRocks.com.

Many people assume that lithium produces the color of lepidolite; however, lithium rarely serves as a chromophore in minerals. Manganese is the cause of color in pink, red and purple lepidolites.

Lepidolite has a chemical composition that ranges in a solid solution series from that of polylithionite KLi2Al(Si4O10)(F,OH)2 to that of trilithionite K(Li1.5Al1.5)(AlSi3O10)(F,OH)2. This compositional range of lithium mica is known as the lepidolite series.

The properties of lepidolite make most specimens easy to identify. If you find a pink to purple mica mineral, it is probably lepidolite. 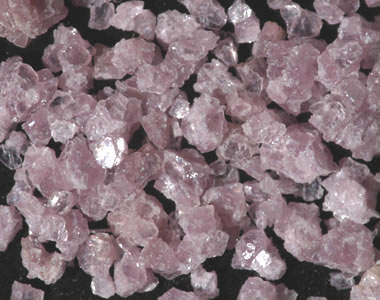 Mine Production Lepidolite: This photograph shows a small amount of crushed lepidolite produced from the Stewart Mine, San Diego County, California. It was removed from the mine in the form of compact masses of purplish-pink crystals as is characteristic of lepidolite. Particles in the photo are up to about one centimeter across. Photograph by the United States Geological Survey. 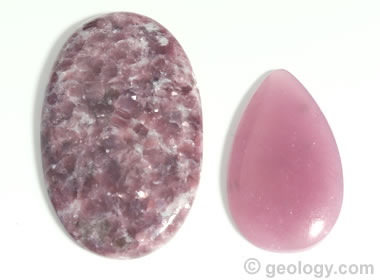 The most important use of lepidolite has been as a minor ore of lithium metal. This use was more important in the first half of the 1900s than it is today. Today most lithium is produced from brine and evaporite deposits in South America, where lithium can be extracted more economically.

Small amounts of rubidium sometimes substitute for lithium in the lepidolite crystal lattice. When present, the rubidium can be recovered as a byproduct during the extraction of lithium. Lepidolite and pollucite, another lithium mineral that can contain significant amounts of cesium, often occur together. These minerals can be mined for lithium with cesium as a byproduct.

Lepidolite is sometimes used as a source of flake mica. It is also used to make glass and as an ingredient in some enamels. Lepidolite can be used as an ornamental stone and is an important constituent in some gem materials. 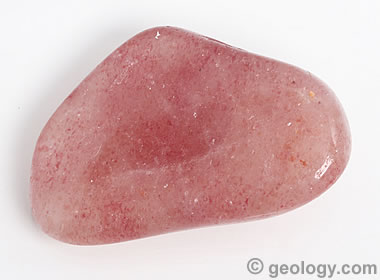 Pink Aventurine: This photograph shows a tumbled stone of pink aventurine. Aventurine is a variety of quartz that is colored by tiny mica flakes that also impart an aventurescent luster. Click here for a close-up view that shows how few flakes of lepidolite are needed to impart color in aventurine.

Lepidolite As a Gem Material

Lepidolite as a mineral lacks the hardness and tenacity to be a good gem material. However, it is sometimes impregnated with quartz, and that gives it durability. Lepidolite impregnated with quartz makes an attractive pink to purple gemstone, but what makes these stones even more desirable are the bright flashes that occur when the mica cleavage surfaces reflect light. This material is used to produce cabochons, beads, tumbled stones, and ornamental items. They are usually sold as “lepidolite” without giving the quartz proper credit for its important job.

Lepidolite is also an important ingredient in the quartz gem known as “aventurine”. The aventurescence and color of pink, red, and purple aventurine is often caused by the presence of tiny flakes of lepidolite within the quartz. Just a few weight percent of lepidolite flakes can be enough to impart a distinct color in aventurine.