The most abundant mica is used in a variety of construction materials and manufactured products.

Muscovite is the most common mineral of the mica family. It is an important rock-forming mineral present in igneous, metamorphic, and sedimentary rocks. Like other micas it readily cleaves into thin transparent sheets. Muscovite sheets have a pearly to vitreous luster on their surface. If they are held up to the light, they are transparent and nearly colorless, but most have a slight brown, yellow, green, or rose-color tint.

The ability of muscovite to split into thin transparent sheets - sometimes up to several feet across - gave it an early use as window panes. In the 1700s it was mined for this use from pegmatites in the area around Moscow, Russia. These panes were called "muscovy glass" and that term is thought to have inspired the mineral name "muscovite."

Sheet muscovite is an excellent insulator, and that makes it suitable for manufacturing specialized parts for electrical equipment. Scrap, flake, and ground muscovite are used as fillers and extenders in a variety of paints, surface treatments, and manufactured products. The pearlescent luster of muscovite makes it an important ingredient that adds "glitter" to paints, ceramic glazes, and cosmetics.

Muscovite is easily identified because its perfect cleavage allows it to be split into thin, flexible, elastic, colorless, transparent sheets with a pearly to vitreous luster. It is the only common mineral with these properties.

Muscovite: Muscovite from Stoneham, Maine. Specimen is approximately 4 inches (10 centimeters) across. Hand specimens of this size and thickness often appear to have a black, brown, or silver color; however, when they are split into thin sheets, the clear transparent nature of muscovite is revealed. Thin sheets often have a slight tint of brown, green, yellow, or rose.

Muscovite is found in igneous, metamorphic, and sedimentary rocks. In igneous rocks, it is a primary mineral that is especially common in granitic rocks. In granite pegmatites, muscovite is often found in large crystals with a pseudohexagonal outline. These crystals are called "books" because they can be split into paper-thin sheets. Muscovite rarely occurs in igneous rocks of intermediate, mafic, and ultramafic composition.

Muscovite can form during the regional metamorphism of argillaceous rocks. The heat and pressure of metamorphism transforms clay minerals into tiny grains of mica which enlarge as metamorphism progresses. Muscovite can occur as isolated grains in schist and gneiss, or it can be abundant enough that the rocks are called "mica schist" or "micaceous gneiss."

Muscovite is not especially resistant to chemical weathering. It is quickly transformed into clay minerals. Tiny flakes of muscovite sometimes survive long enough to be incorporated into sediments and immature sedimentary rocks. It is evidence that these sediments and rocks have not been subjected to severe weathering. 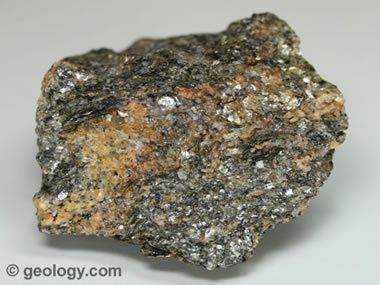 Muscovite schist: A specimen of muscovite schist. Muscovite is formed during the metamorphism of argillaceous rocks. Specimen shown is about two inches (five centimeters) across.

Muscovite is a potassium-rich mica with the following generalized composition...

When chromium substitutes for aluminum in muscovite the material takes on a green color and is known as "fuchsite." Fuchsite is often found disseminated through metamorphic rocks of the greenschist facies. Occasionally it will be abundant enough to give the rock a distinct green color, and for those rocks the name "verdite" is used.

Muscovite: Muscovite from Mitchell County, North Carolina. Specimen is approximately 3 inches (7.6 centimeters) across. The transparent nature of muscovite is clearly seen in this photo.

Ground mica, mostly muscovite, is used in the United States to manufacture a variety of products [1].

The primary use of ground mica is in joint compound used to finish seams and blemishes in gypsum wallboard. The mica serves as a filler, improves the workability of the compound, and reduces cracking in the finished product. In 2011 about 69% of the dry-ground mica consumed in the United States was used in joint compound.

Ground mica is used as a pigment extender in paint. It helps keep pigment in suspension; reduces chalking, shrinking, and shearing of the finished surface; reduces water penetration and weathering, and brightens the tone of colored pigments. In some automotive paints tiny flakes of mica are used to produce a pearlescent luster.

Ground mica is an additive to drilling mud that helps to seal porous sections of the drill hole to reduce circulation loss. In 2011, about 17% of the dry-ground mica consumed in the United States was used in drilling muds.

The auto industry in the United States uses ground mica to improve the performance of plastic parts. In plastics, particles of ground mica serve as an agent to absorb sound and vibration. It can also improve mechanical properties by increasing stability, stiffness, and strength.

Ground mica is used as an inert filler and mold release agent in the manufacture of molded rubber products such as tires and roofing. The platy grains of mica act as an antisticking agent.

Dry-ground mica is used as a surface coating on asphalt shingles and rolled roofing. The flat mica particles coat the surface and act as an antistick agent. The mica does not absorb the asphalt and stands up well to weathering.

Some of the highest quality ground mica is used in the cosmetics industry. The pearly luster of ground mica makes it an important ingredient in blushes, eyeliner, eye shadow, foundation, hair and body glitter, lipstick, lip gloss, mascara, and nail polish.

Mica windows: Mica is heat resistant and is often used as a "window" for wood stoves, ovens, and furnaces. These mica windows are for a wood stove and are about the same thickness as a piece of paper. Sheet size is 3 inches x 4 inches. They can be trimmed with scissors to fit the size of the window.

While ground mica might sell for $300 per metric ton, sheet mica for specialty uses can sell for prices up to $2000 per kilogram. Mica has several properties that make it suitable for very special uses:

1) it can be split into thin sheets

3) it is stable when exposed to electricity, light, moisture and extreme temperatures

The quality of sheet mica is influenced by the presence of inclusions. These can impair splitting, decrease transparency, and reduce dielectric strength. Tiny crystals of staurolite, zircon, garnet, tourmaline, magnetite, hematite and other minerals can form between the sheets and orient parallel to the mica's crystal structure. Inclusions decrease the mica's value and its ability to be used in most applications. (See image.)

The use of ground mica is mainly determined by activity levels of the construction and auto industries. An increase in domestic oil and gas drilling should sustain the demand for mica additives for drilling mud. Producers in the United States should be able to supply domestic demand, with some mica being imported for specialty use or where transportation from domestic producers to the consumer is more costly than imported mica. About 50,000 tons were produced in the United States in 2011, with about 25,000 tons being imported. China at 700,000 tons, is the largest producer and largest consumer.

Although the demand for sheet mica is growing with the advance of technology, the prices are so high that the invention of substitute materials is growing. Some of these involve making mica sheets from ground mica composites or the creation of synthetic micas in laboratories. Acrylic, fiberglass, nylatron, nylon, polyester, styrene, vinyl-PVC, and vulcanized fibers are all finding use as sheet mica substitutes [2].