Most of Earth’s crust is comprised of a small number of minerals.

The Most Abundant Minerals in Earth's Crust: Known as the "common rock-forming minerals", they are minerals present at the time of a rock's formation and are important minerals in determining the rock's identity. Relative abundance percentages from Ronov and Yaroshevsky; Chemical Composition of the Earth's Crust; American Geophysical Union Monograph Number 13, Chapter 50, 1969.

What Are Rock-Forming Minerals?

Scientists have identified over 4,000 different minerals. A small group of these minerals make up almost 90% of the rocks of Earth’s crust. These minerals are known as the common rock-forming minerals.

To be considered a common rock-forming mineral, a mineral must: A) be one of the most abundant minerals in Earth’s crust; B) be one of the original minerals present at the time of a crustal rock’s formation; and, C) be an important mineral in determining a rock’s classification. 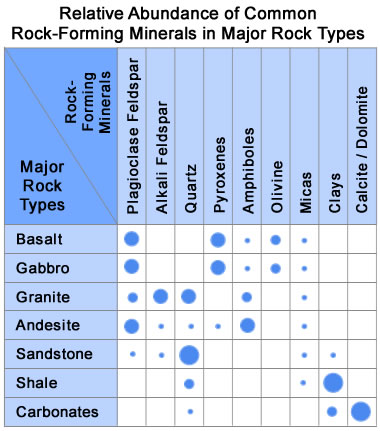 Rock-Forming Minerals in Major Rock Types: This chart shows the relative abundance of the common rock forming minerals in some of Earth's most abundant rock types. Basalt and gabbro account for most of the rock in the oceanic crust, granite (rhyolite) and andesite (diorite) represent abundant rock types of the continental crust. Sandstone, shale and carbonates represent the common materials in the sedimentary cover of continents and ocean basins.

Minerals of the Oceanic Crust

Minerals of the Continental Crust

Minerals in the Sedimentary Cover

Both the oceanic and continental crusts are partly covered with a thin layer of sedimentary rocks and sediments. These consist mainly of clastic rocks such as sandstone, siltstone and shale, along with carbonate rocks such as dolostone and limestone. These clastic rocks are composed of mainly quartz, clay minerals, and a small amount of micas and feldspar minerals. The carbonate rocks consist primarily of calcite and dolomite. A small number of materials, composed of a small number of minerals, make up most of the sediment and sedimentary rocks that cover the continents and ocean basins.