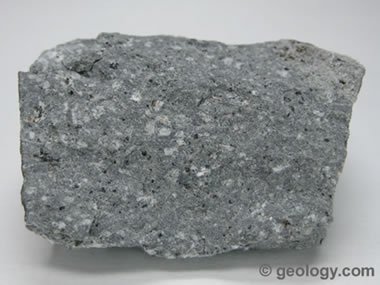 Andesite: The specimen shown is about two inches (five centimeters) across and has a porphyritic texture.

Andesite is the name of a family of fine-grained, extrusive igneous rocks that are usually light to dark gray in color. They have a mineral composition that is intermediate between granite and basalt. Andesite is a rock typically found in volcanoes above convergent plate boundaries between continental and oceanic plates.

Igneous rock composition chart: This chart shows that andesite is typically composed of plagioclase, amphiboles, and micas; sometimes with minor amounts of pyroxenes, quartz, or orthoclase.

Andesite is typically found in lava flows produced by stratovolcanoes above subduction zones. Because these lavas cooled rapidly at the surface, they are generally composed of small crystals. The mineral grains are usually so small that they cannot be seen clearly without the use of a hand lens or other magnifying device.

Some specimens that cooled rapidly contain a significant amount of glass, while others that formed from gas-charged lavas have a vesicular or amygdaloidal texture.

Andesite often weathers to various shades of brown. In the field, weathered specimens must be broken to properly see their color and their mineral composition. Classroom specimens usually do not require breakage.

Andesite is rich in plagioclase feldspar and amphibole minerals. Quartz and pyroxene minerals may be absent or present in small quantities. Small amounts of mica will be present as biotite or muscovite. Andesite usually does not contain olivine. The accompanying chart titled "Generalized Composition Ranges of Common Igneous Rocks" illustrates the mineral composition of andesite. 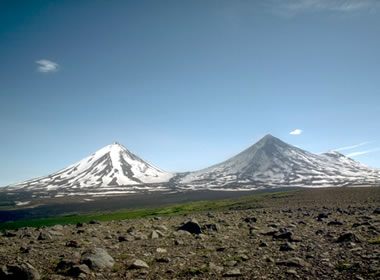 Stratovolcanoes: Pavlof Volcano (right) and Pavlof Sister Volcano (left) are a pair of symmetrical stratovolcanoes built of andesite flows and tephra on the Alaska Peninsula. Pavlof Volcano is one of the most active volcanoes in Alaska. Photo by T. Miller, United States Geological Survey.

Where Does Andesite Form?

Andesite and diorite are common rocks of the continental crust above subduction zones. They generally form after an oceanic plate melts during its descent into the subduction zone to produce a source of magma.

Andesite and diorite have a composition that is intermediate between basalt and granite. This is because their parent magmas formed from the partial melting of a basaltic oceanic plate. This magma may have received a granitic contribution by melting granitic rocks as it ascended or mixed with granitic magma. 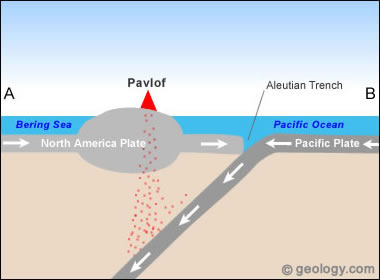 Pavlof Volcano - plate tectonics: Simplified plate tectonics cross-section showing how Pavlof Volcano is located in the Aleutian Island chain, above a subduction zone, where basaltic crust of the Pacific Plate is being partially melted at depth. The ascending magma then passes through continental crust of the North America Plate, where it might mix with other magmas or be altered by melting rocks of different composition.

The Geography of Andesite

Andesite derives its name from the Andes Mountains of South America. In the Andes it occurs as lava flows interbedded with ash and tuff deposits on the steep flanks of stratovolcanoes. Andesite stratovolcanoes are also found above subduction zones in Central America, Mexico, Washington, Oregon, the Aleutian Arc of Alaska, Japan, Indonesia, the Philippines, the Caribbean, and New Zealand, among other locations.

Andesite can also form away from the subduction zone environment. For example, it can form at ocean ridges and oceanic hot spots from partial melting of basaltic rocks. It can also form during eruptions at continental plate interiors where deep-source magma melts continental crust or mixes with continental magmas. There are many other environments where andesite might form. 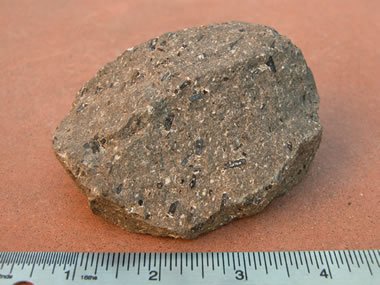 Occasionally, andesites contain large, visible grains of plagioclase, amphibole, or pyroxene. These large crystals are known as "phenocrysts." They begin forming when a magma, which is cooling at depth, approaches the crystallization temperature of some of its minerals. These high-crystallization-temperature minerals begin forming below the surface and grow to visible sizes before the magma erupts.

When the magma erupts onto the Earth's surface, the rest of the melt crystallizes quickly. This produces a rock with two different crystal sizes: large crystals that formed slowly at depth (the "phenocrysts"), and small crystals that formed quickly at the surface (known as "groundmass").

"Andesite porphyry" is the name used for these rocks with two crystal sizes. The name of an abundant phenocryst mineral may be used as an adjective to the rock name. An example is the hornblende andesite porphyry shown in the accompanying photo. 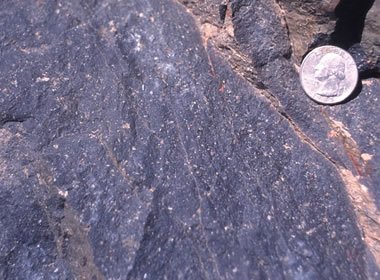 Some magmas that produce explosive eruptions above subduction zones contain enormous amounts of dissolved gas. These magmas can contain several percent dissolved gas by weight! This gas can have several origins, examples of which include the following:

At depth, these gases can be dissolved in the magma like carbon dioxide dissolved in a can of cold beer. If that can of beer is shaken and suddenly depressurized by opening the can, the gas and the beer will erupt from the opening.

A volcano behaves in a similar manner. A rising magma chamber can instantly be depressurized by a landslide, faulting, or other event and an enormous volume of rapidly expanding gas will explode through the overlying rock.

Many volcanic plumes and ash eruptions occur when gas-charged andesitic magmas erupt. The gas pressure that causes the eruption blows large amounts of tiny rock and magma particles into the atmosphere.

These particles, known as volcanic ash, can be blown high into the atmosphere and carried long distances by the wind. They often cause problems for aircraft operating downwind from the volcano.

Catastrophic eruptions like Mount St. Helens, Pinatubo, Redoubt, and Novarupta were produced by andesitic magmas with enormous amounts of dissolved gas under high pressure. It is difficult to imagine how a magma can contain enough dissolved gas to produce one of these eruptions. Magma is Earth's most powerful solvent. 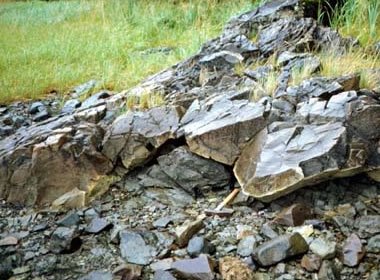 Andesite Flow: One of numerous massive andesite flows from the Zarembo Island area of southeastern Alaska. They are gray pyroxene and feldspar porphyrys that weather to maroon or green. Photo by USGS.

The Elusive Definition of Andesite

The formal definition of andesite is problematic. Many authors have classified igneous rocks based upon their chemical and mineralogical compositions. However, none of these classifications are in perfect agreement.

For a fine-grained rock like andesite, these classifications are impossible to use precisely when in the field or the classroom. They require chemical or mineralogical analyses that are usually not available, affordable, or practical.

If you examine a rock that appears to be andesite, but you are not confident that it meets the mineralogical or chemical classification of andesite, you might properly call it an "andesitoid" rock. What does that mean? It means that the rock looks like andesite, but, a microscopic examination or chemical analysis might prove you wrong!