An igneous rock that forms from the debris ejected by an explosive volcanic eruption. 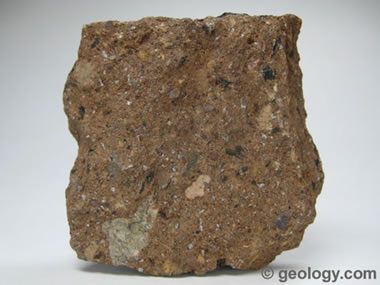 Tuff: An igneous rock that contains the debris from an explosive volcanic eruption. It often contains fragments of bedrock, tephra, and volcanic ash. The specimen shown here is about two inches (five centimeters) across.

Tuff is an igneous rock that forms from the products of an explosive volcanic eruption. In these eruptions, the volcano blasts rock, ash, magma and other materials from its vent. This ejecta travels through the air and falls back to Earth in the area surrounding the volcano. If the ejected material is compacted and cemented into a rock, that rock will be called "tuff."

Some tuff deposits are hundreds of meters thick and have a total eruptive volume of many cubic miles. That enormous thickness can be from a single eruptive blast or, more commonly, from successive surges of a single eruption - or eruptions that were separated by long periods of time. 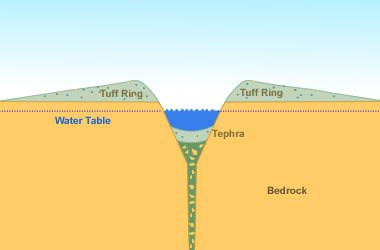 Tuff ring: Drawing of a tuff ring surrounding a shallow, water-filled crater. The tuff ring is formed from materials that were ejected by the volcanic blast and fell back to Earth in the area surrounding the crater. Tuff rings generally have a gentle slope of between two and ten degrees.

A "tuff ring" is a small volcanic cone of low relief that surrounds a shallow crater. These craters, known as maars, are formed by explosions caused by hot magma coming in contact with cold groundwater. The explosion blasts fragments of bedrock, tephra, and ash from the crater. The tuff ring forms as these ejected materials fall back to Earth. Tuff rings range in size from several hundred meters across to several thousand meters. They are typically less than a few hundred meters in height and have a very gentle slope of less than ten degrees. 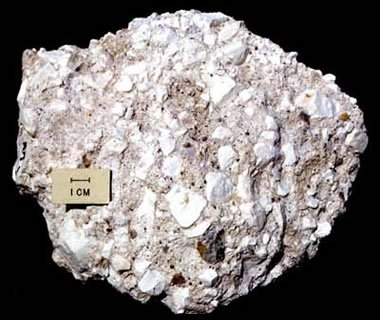 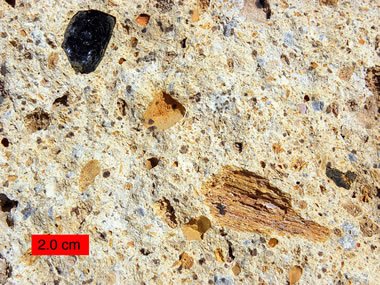 Tuff: Close-up of a piece of tuff exposed at Hole-in-the-Wall, Mojave National Preserve, California. This specimen clearly displays the diversity of materials that compose a tuff. Public domain image by Mark A. Wilson, Department of Geology, The College of Wooster.

Sometimes the ejecta is hot enough when it lands that the particles are soft and sticky. These materials "weld" together upon impact or upon compaction. The rock formed from this hot ejecta is known as a "welded tuff" - because the ejected particles are welded together. Some deposits might contain welded tuff near the vent and unwelded tuff at a distance where smaller, cooler particles fell to the ground. 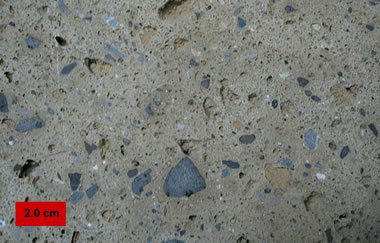 Ettringer tuff: Close-up of a specimen of Ettringer Tuff showing a variety of rock fragments and tephra in a matrix of volcanic ash. Public domain image by Roll-Stone of Wikimedia.

Many Types of Tuff

"Tuff" is a name that is used for a broad range of materials. The only requirement is that the materials are ejecta produced by a volcanic eruption. Tuff can contain fragments of dust-size particles to boulder-size particles and be composed of many different types of material. 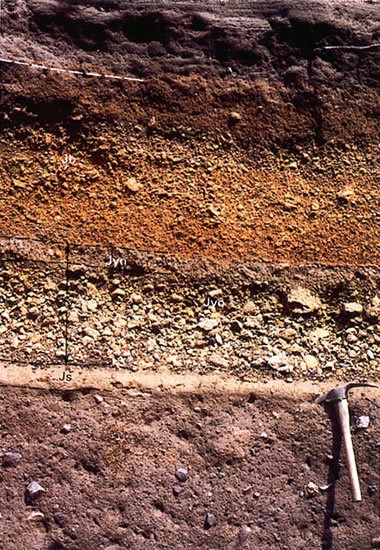 Mount St. Helens tephra: Photograph of an outcrop of stratified tuff that formed from tephra produced by pre-1980 eruptions at Mount St. Helens, Washington. This photograph shows several layers of tephra with different textures and different compositions, each from a different eruptive event. [3]

Many tuff deposits contain fragments of bedrock that are unrelated to volcanic activity. These materials are involved when the volcanic explosion occurs below the ground. The subsurface explosion crushes the overlying bedrock and launches it into the air mixed with tephra and volcanic ash produced from the magma source below.


Different volcanoes are supplied with magma of different compositions. Many tuff deposits form from magma with a rhyolitic composition, but andesitic, basaltic, and other types of magma might contribute to the tuff.

Tuff also varies by particle size. Near the vent, a tuff might consist mainly of large blocks of material in a volcanic ash matrix. With distance from the vent, the clasts will be smaller in size. At the edges of the rock unit, the tuff might be mainly composed of very fine ash.