A maar is a volcanic crater that forms when magma contacts groundwater to produce a steam explosion. 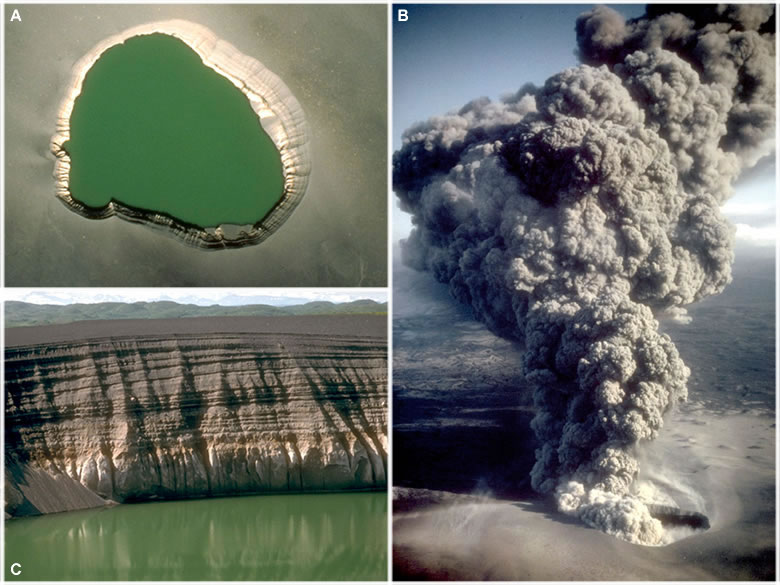 Ukinrek Maar: Views of East Ukinrek Maar Crater, which formed in April, 1977 during a 10-day eruption. This eruption provided a rare - and the most recent - opportunity for researchers to observe the formation of a maar by volcanic activity. (A) A vertical view of the crater which is about 300 meters across. Not visible is a 49-meter-high lava dome within the crater that is now covered by water. The ground surrounding the crater is covered with tephra in this July 1990 photo by the Fish and Wildlife Service. Enlarge. (B) A photograph of the phreatomagmatic eruption and plume taken during the April, 1977 eruption. Image by the United States Geological Survey. Enlarge. (C) A view of the southeast crater wall showing stratified tephra deposits produced during the 1977 eruption. About 15 meters of tephra overlie a thin layer of glacial till that caps ash-flow deposits produced by an earlier eruption at Ugashik Caldera. Image by the United States Geological Survey. Enlarge. [1] 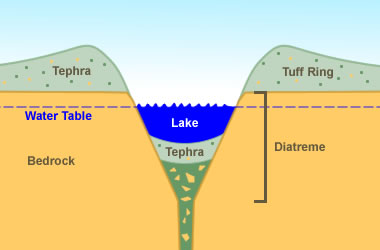 Maar diagram: Cross-sectional view through a maar showing the diatreme excavated by the phreatomagmatic explosions, the tuff ring of tephra that surrounds the crater, and how the water table has caused a lake to form within the crater. 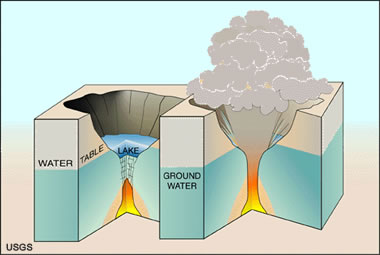 Many of Kilauea's pre-1924 explosive eruptions that produced significant ash deposits probably happened when the volcano's summit crater was so deep that its floor was below the water table, letting groundwater seep in to form a lake. Whenever magma erupted into the lake water, violent explosions of steam and volcanic gases resulted, fragmenting the magma into tiny ash particles and driving fast-moving, extremely hot ash-laden steam clouds (pyroclastic surges) out of the crater. Image and caption by USGS.

What is a Maar?

A maar is formed by one or more underground explosions that occur when hot magma comes into contact with shallow ground water to produce a violent steam explosion. These explosions crush the overlying rocks and launch them into the air along with steam, water, ash and magmatic material. The materials usually travel straight up into the air and fall back to Earth to form the tephra deposits that surround the crater. If the tephra lithifies, it will become an igneous rock known as tuff. 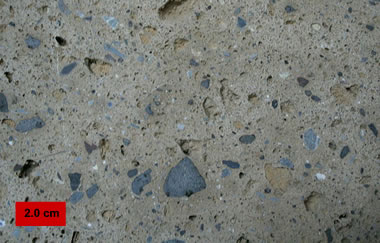 Tuff: If tephra surrounding a maar lithifies, it will become a rock known as "tuff." Tuff is composed of rock fragments and large pieces of tephra in a matrix of volcanic ash. Image by Roll-Stone of Wikimedia.

The crater floor of a maar is usually below the original ground surface. After the eruption, an inflow of groundwater often turns the crater into a shallow lake.

Most maars are a few hundred to a thousand meters in diameter and less than one hundred meters in depth. The largest maars in the world are the Espenberg Maars on the Seward Peninsula of Alaska. These maars are up to 8000 meters across and up to 300 meters in depth. They were formed during the Pleistocene when ascending basaltic magma encountered frozen permafrost. It is believed that a slow but sustained supply of water from the permafrost contributed to the enormous size of these maars. [2]

How Common are Maars?

Maars are more numerous than most people realize. After cinder cones, maars are the second most common volcanic landform. [3] If you search the Smithsonian Institution's Global Volcanism Program database, you will be able to find hundreds of maars. [4]

Maars are underrepresented as volcanic landscape features because they are small in size and lack rocky vertical development that would make them resistant to weathering and erosion. Because they are relatively small, shallow depressions, they can be easily filled with sediment and not recognized as volcanic features. 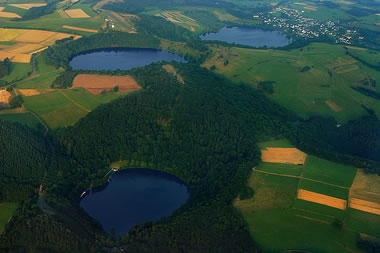 Maars near Duan, Germany: The first maars to be described are located near Daun, Germany, shown in this aerial photograph by Martin Schildgen. Image used under a Creative Commons License. Enlarge.

The explosions that form a maar are known as phreatic explosions. They are driven in part by the enormous and instantaneous volume change that occurs when water flashes into steam.

When suddenly heated, one cubic meter of water converts into 1,600 cubic meters of steam. If this happens below Earth's surface, the result can be a vertical eruption of steam, water, ash, volcanic bombs, and rock debris. The volcanic cones produced by these eruptions are made up mostly of ejecta and are usually of very low relief - only a few tens of meters. 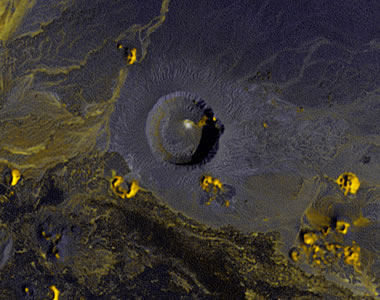 Crater Elegante: Landsat image of Crater Elegante, Sonora, Mexico. This maar was created when an eruption blasted through basalt bedrock in an area where the water table is not high enough to flood the crater. Crater Elegante is the largest of ten maars in the Pinacate Volcano field. Enlarge.

Some magmas contain enormous amounts of dissolved gas -- sometimes up to several percent gas by weight. This gas is under very high confining pressure because the magma is below Earth's surface. During the formation of a maar, the rock above the magma chamber is usually blasted away. This suddenly reduces the confining pressure on the magma and its dissolved gas. The sudden pressure reduction allows an immediate and violent expansion of the dissolved gas. The magma then degasses like a can of shaken beer when the pull tab is removed. When degassing magma adds to the explosive force, the eruption is known as "phreatomagmatic."

Not all phreatic and phreatomagmatic eruptions occur from the interaction of hot magma with groundwater. Other water sources include lakes, streams, the ocean, or melting permafrost.

Maars are usually formed by multiple explosions. Initially there can be simultaneous explosions at multiple depths. After the initial explosions, groundwater from surrounding lands begins draining towards the crater and fuels additional blasts. These continue until the supply of local groundwater is depleted or the magma source has been depleted or cooled. The 1977 eruption at the East Ukinrek Maar Crater, shown in the photos at the top of this page and in the photo below, consisted of a series of explosions that persisted for a period of ten days. 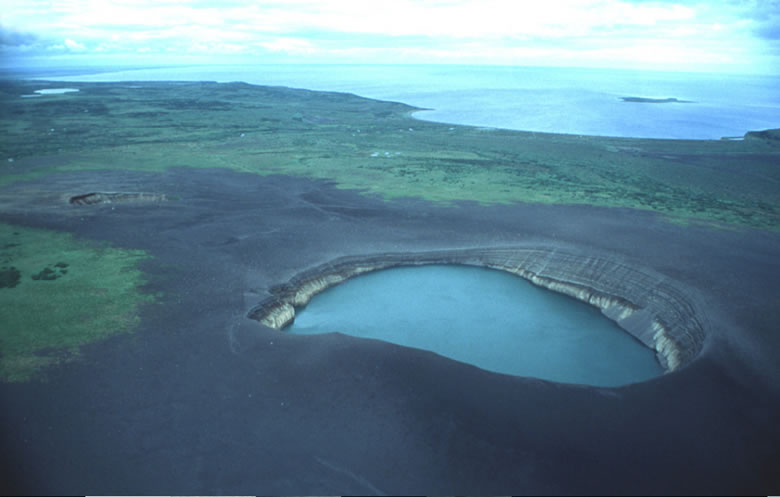 Ukinrek Maars: An oblique aerial photo of the Ukinrek Maars, two explosion craters on the Alaska Peninsula, that formed during a ten-day eruption in 1977. The Bering Sea is visible in the distance. The lake in the foreground occupies the East Maar, which is about 300 meters wide, with a depth of about 70 meters. About 600 meters to the west is the West Maar, the smaller of the two craters, and the first to form. The eruptions broke through glacial deposits and covered the surrounding land with basaltic cinders. The eruption was from a mantle-derived magma of olivine basalt. Photograph by Christina Neal of the United States Geological Survey in 1993.

The largest known maar on Earth is Devil Mountain Maar Lake, located on the northern part of the Seward Peninsula of Alaska. It was produced by a hydromagmatic eruption that occurred about 17,500 years ago. The blast spread tephra over an area of about 2,500 square kilometers. The tephra is several tens of meters thick near the maar and decreases with distance away from the maar. [2]