Active Volcanoes of Our Solar System

Activity Has Been Observed on Earth and on Moons of Jupiter, Neptune and Saturn 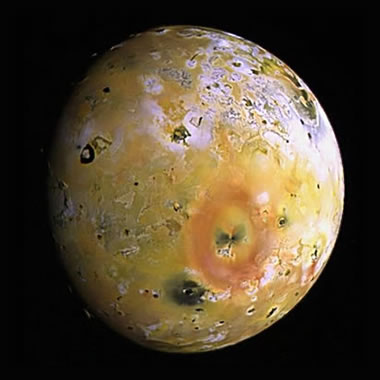 Volcanoes on Io: Io, a moon of Jupiter, is the most volcanically active body in our solar system. It has over 100 active volcanic centers, many of which have multiple active vents. Eruptions recurrently resurface large parts of the moon. NASA image.

Most of the volcanic features discovered within our solar system formed millions of years ago - when our solar system was younger and the planets and moons had much higher internal temperatures. Geologically recent volcanic activity is not as widespread.

Based upon observations from Earth and from space vehicles, only four bodies in the solar system have confirmed volcanic activity. These are 1) Earth; 2) Io, a moon of Jupiter; 3) Triton, a moon of Neptune; and, 4) Enceladus, a moon of Saturn.

Evidence for possible volcanic activity on Mars, Venus, Pluto, and Europa has been observed, but no direct eruption observations have been made.

What is an Active Volcano?

The term "active volcano" is used mainly in reference to Earth's volcanoes. Active volcanoes are ones that are currently erupting or that have erupted at some time in human history.

This definition works fairly well for volcanoes on Earth because we can observe some of them easily - but many are located in remote areas where small eruptions could go unnoticed, or below remote parts of the oceans where even large eruptions might not be detected. An example is Tamu Massif, "the world's most massive volcano", which was not recognized until 2013.

Beyond Earth, our abilities to detect volcanic eruptions did not begin until the invention of powerful telescopes and made a great leap when space vehicles were able to carry telescopes and other sensing devices close to other planets and their moons.

Today a number of telescopes are available to detect these eruptions - if they are large enough and facing in the proper direction. However, small eruptions might not be noticed because there are not enough telescopes to watch all areas of the solar system where volcanic activity might occur.

Although only a few extraterrestrial eruptions have been detected, much has been learned about them. Perhaps the most interesting discovery has been the cryovolcanoes in the outer region of the solar system. 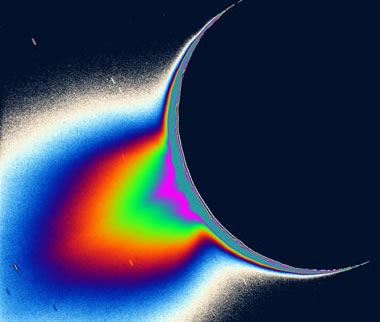 Most people define the word "volcano" as an opening in Earth's surface through which molten rock material, gases, and volcanic ash escape. This definition works well for Earth; however, some bodies in our solar system have a significant amount of gas in their composition.

Planets near the sun are rocky and produce silicate rock magmas similar to those seen on Earth. However, planets beyond Mars and their moons contain significant quantities of gas in addition to silicate rocks. The volcanoes in this part of our solar system are usually cryovolcanoes. Instead of erupting molten rock, they erupt cold, liquid or frozen gases such as water, ammonia, or methane.

Io Tvashtar volcano: This five-frame animation, produced using images captured by the New Horizons spacecraft, illustrates a volcanic eruption on Io, a moon of Jupiter. The eruption plume is estimated to be about 180 miles high. NASA image.

Jupiter's Moon Io: The Most Active

Io is the most volcanically active body in our solar system. This surprises most people because Io's great distance from the sun and its icy surface make it seem like a very cold place.

However, Io is a very tiny moon that is enormously influenced by the gravity of the giant planet Jupiter. The gravitational attraction of Jupiter and its other moons exert such strong "pulls" on Io that it deforms continuously from strong internal tides. These tides produce a tremendous amount of internal friction. This friction heats the moon and enables the intense volcanic activity.

Io has hundreds of visible volcanic vents, some of which blast jets of frozen vapor and "volcanic snow" hundreds of miles high into its atmosphere. These gases could be the sole product of these eruptions, or there could be some associated silicate rock or molten sulfur present. The areas around these vents show evidence that they have been "resurfaced" with a flat layer of new material. These resurfaced areas are the dominant surface feature of Io. The very small number of impact craters on these surfaces, compared to other bodies in the solar system, is evidence of Io's continuous volcanic activity and resurfacing. 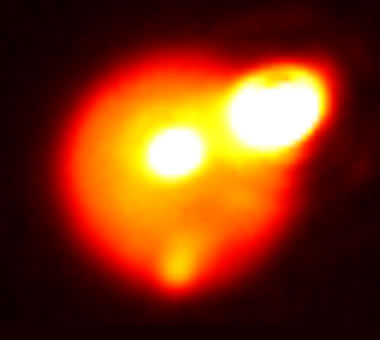 Volcanic eruption on Io: Image of one of the largest eruptions ever observed on Jupiter's moon, Io, taken on August 29, 2013 by Katherine de Kleer of the University of California at Berkeley using the Gemini North Telescope. This eruption is thought to have launched hot lava hundreds of miles above Io's surface. More information.

"Curtains of Fire" on Io

On August 4, 2014 NASA published images of volcanic eruptions that occurred on Jupiter's moon Io between August 15 and August 29 of 2013. During that two-week period, eruptions powerful enough to launch material hundreds of miles above the surface of the moon are believed to have occurred.

Other than Earth, Io is the only body in the solar system that is capable of erupting extremely hot lava. Because of the moon's low gravity and the magma's explosivity, large eruptions are believed to launch tens of cubic miles of lava high above the moon and resurface large areas over a period of just a few days.

The accompanying infrared image shows the August 29, 2013 eruption and was acquired by Katherine de Kleer of the University of California at Berkeley using the Gemini North Telescope, with support from the National Science Foundation. It is one of the most spectacular images of volcanic activity ever taken. At the time of this image, large fissures in Io's surface are believed to have been erupting "curtains of fire" up to several miles long. These "curtains" are probably similar to the fountaining fissures seen during the 2018 eruption of Kilauea in Hawaii. 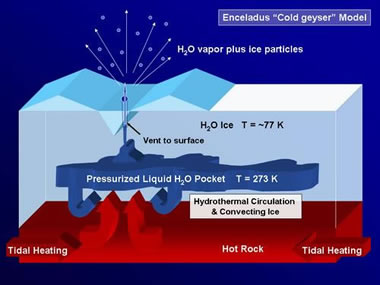 Cryovolcano mechanics: Diagram of how a cryovolcano might work on Io or Enceladus. Pockets of pressurized water a short distance below the surface are heated by internal tidal action. When pressures become high enough, they vent to the surface.

Triton, a moon of Neptune, was the first location in the solar system where cryovolcanoes were observed. The Voyager 2 probe observed plumes of nitrogen gas and dust up to five miles high during its 1989 flyby. These eruptions are responsible for Triton's smooth surface because the gases condense and fall back to the surface, forming a thick blanket similar to snow.

Some researchers believe that solar radiation penetrates the surface ice of Triton and heats a dark layer below. The entrapped heat vaporizes subsurface nitrogen, which expands and eventually erupts through the ice layer above. This would be the only known location of energy from outside of a body causing a volcanic eruption - the energy usually comes from within. 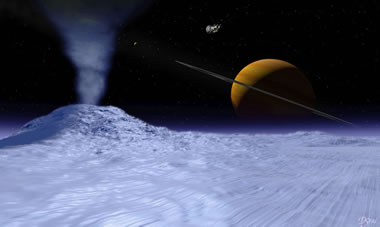 Cryovolcano on Enceladus: An artist's vision of what a cryovolcano might look like on the surface of Enceladus, with Saturn visible in the background. NASA image. Enlarge.

Cryovolcanoes on Enceladus, a moon of Saturn, were first documented by the Cassini spacecraft in 2005. The spacecraft imaged jets of icy particles venting from the south polar region. This made Enceladus the fourth body in the solar system with confirmed volcanic activity. The spacecraft actually flew through a cryovolcanic plume and documented its composition to be mainly water vapor with minor amounts of nitrogen, methane, and carbon dioxide.

One theory for the mechanism behind the cryovolcanism is that subsurface pockets of pressurized water exist a short distance (perhaps as little as a few tens of meters) beneath the moon's surface. This water is kept in the liquid state by the tidal heating of the moon's interior. Occasionally these pressurized waters vent to the surface, producing a plume of water vapor and ice particles.

The most direct evidence that can be obtained to document volcanic activity on extraterrestrial bodies is to see or image the eruption taking place. Another type of evidence is a change in the body's surface. An eruption can produce a ground cover of debris or a resurfacing. Volcanic activity on Io is frequent enough and the surface is visible enough that these types of changes can be observed. Without such direct observations, it can be difficult from Earth to know if the volcanism is recent or ancient. 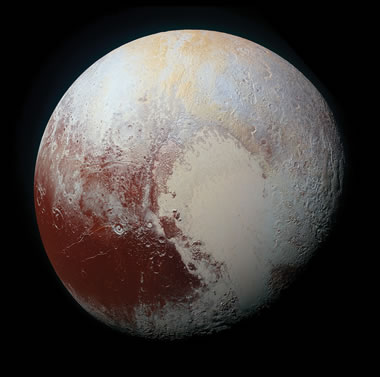 Potential Area of Recent Volcanic Activity on Pluto: A high-resolution color view of one of two potential cryovolcanoes spotted on the surface of Pluto by the New Horizons spacecraft in July 2015. This feature, known as Wright Mons is about 90 miles (150 kilometers) across and 2.5 miles (4 kilometers) high. If it is in fact a volcano, as suspected, it would be the largest such feature discovered in the outer solar system. Enlarge.

Will More Activity be Discovered?

Cryovolcanoes on Enceladus were not discovered until 2005, and an exhaustive search has not been done across the solar system for this type of activity. In fact, some believe that volcanic activity on our close neighbor Venus still occurs but is hidden beneath the dense cloud cover. A few features on Mars suggest possible recent activity there. It is also very likely, perhaps probable, that active volcanoes or cryovolcanoes will be discovered on moons of icy planets in the outer portions of our solar system such as Europa, Titan, Dione, Ganymede, and Miranda.

In 2015, scientists working with images from NASA's New Horizons mission assembled high-resolution color images of potential cryovolcanoes on the surface of Pluto. The accompanying image shows an area on Pluto with a possible ice volcano. Because there are very few impact craters on deposits around this potential volcano, it is thought to have a geologically young age. For more detailed photos and explanations, see this article on NASA.gov. 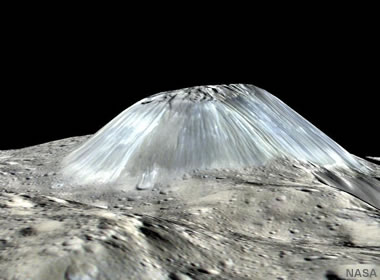 Ahuna Mons, a mountain of saltwater ice on the surface of the dwarf planet Ceres, is shown in this simulated perspective view. It is thought to have formed after a plume of salt water and rock ascended through the dwarf planet's interior, then erupted a plume of salty water. The salty water froze into saltwater ice and built a mountain that is now about 2.5 miles high and 10.5 miles wide. Image by NASA / JPL-Caltech / UCLA / MPS / DLR / IDA.

In 2019, scientists from NASA, the European Space Agency, and the German Aerospace Center published a study that they believe solves the mystery of how Ahuna Mons, a mountain on the surface of Ceres, the largest object in the asteroid belt, was formed. They believe that Ahuna Mons is a cryovolcano that erupted salty water after an ascending plume rose to the surface of the dwarf planet. For more information, see this article on NASA.gov.

This is an exciting time to watch space exploration!