Blue flames and the largest highly acidic lake in the world. 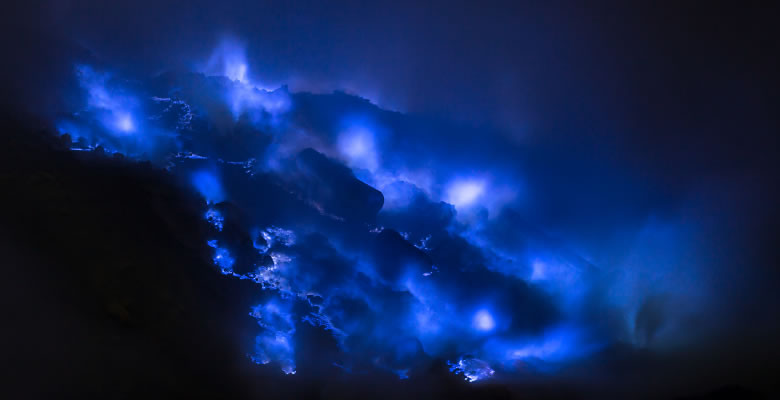 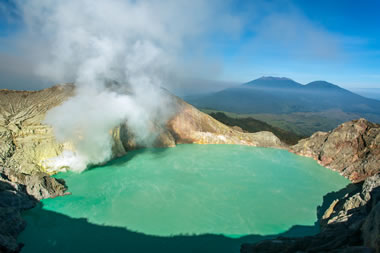 Acid lake: Morning light illuminates the turquoise-colored caldera lake at Kawah Ijen Volcano. A white plume marks the location of the solfatara, where sulfur-rich gases escape from a vent. The turquoise color of the water is caused by its extreme acidity and dissolved metal content. Image copyright iStockphoto / mazzzur. Click image to enlarge.

Kawah Ijen Volcano, on the island of Java, Indonesia has two of the most unusual occurrences on Earth. The first is an active solfatara that emits hot, flammable sulfurous gases. These ignite as they enter Earth's oxygen-rich atmosphere and burn with an electric blue flame. Some of the gas condenses in the atmosphere to produce flows of molten sulfur that also burn with an electric blue flame. The flames are difficult to see during the day but illuminate the landscape at night.

The second occurrence is a one-kilometer-wide caldera lake filled with turquoise-blue water. The color of the water is a result of its extreme acidity and a high concentration of dissolved metals. It is the world's largest highly acidic lake with a measured pH as low as 0.5. The cause of its acidity is an inflow of hydrothermal waters charged with gases from a hot magma chamber below. 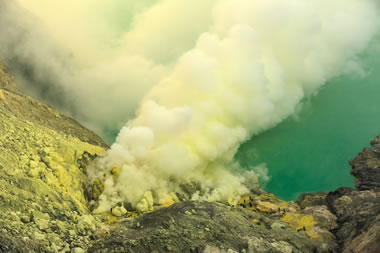 Sulfur fumarole: A sulfur fumarole slightly above the level of the caldera lake. Rocks around the vent have a yellow coating of condensed sulfur. Image copyright iStockphoto / yavuzsariyildiz. Click image to enlarge.

A continuous stream of sulfur-laden gases blasts from fumaroles at the lake-side solfatara. These hot gases travel underground in the absence of oxygen. If they are hot enough when they emerge from a vent, the sulfur ignites upon contact with oxygen in the atmosphere. Often the temperature is low enough that the sulfur condenses, falls to the ground as a liquid, flows a short distance, and solidifies. This produces a renewable deposit of mineral sulfur that local people mine and carry to a local sugar refinery that buys it. 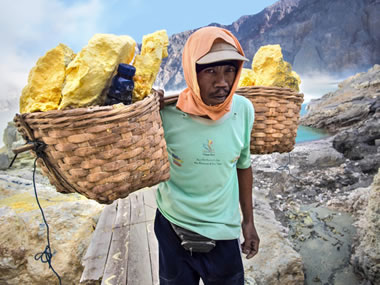 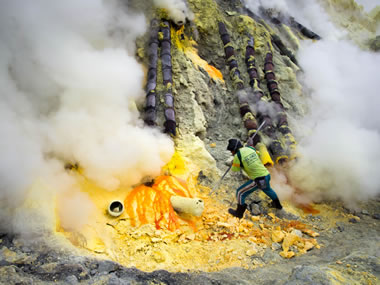 Sulfur pipes: A sulfur miner breaking up sulfur to remove from the caldera. At this location, miners have installed pipes that capture volcanic gases from numerous fumaroles and divert them to a single location. This facilitates collection and provides a safer loading area for the miners. Image copyright iStockphoto / rmnunes.

Miners walk up the flank of the mountain and then descend dangerous rocky paths down the steep walls of the caldera. Then, using steel bars, they break sulfur from an outcrop, load their baskets, and make the return trip to the refinery. Miners make one or two trips per day carrying up to 200 pounds of sulfur. The refinery pays them based upon the weight of sulfur that they deliver. The rate of pay amounts to a few dollars per trip. Ambitious and physically fit miners can make two trips per day.

Miners have carried hundreds of sections of pipe up the mountain. These have been used to capture the gases produced by numerous vents and route them to a single area where their sulfur spills onto a level work area. This makes collection more efficient and safer for the miners.

Sulfur mining at Kawah Ijen has its hazards. The steep paths are dangerous, the sulfur gases are poisonous, and occasional gas releases or phreatic eruptions have killed many miners.

Kawah Ijen Volcano is one of the few locations on Earth where sulfur is still produced by artisanal miners. Today, most of the world's sulfur is produced as a byproduct of oil refining and natural gas processing. Nearly 70 thousand metric tonnes of sulfur are produced by these methods. A coincidence of low wages and a small local demand for native sulfur supports artisanal mining at Kawah Ijen. 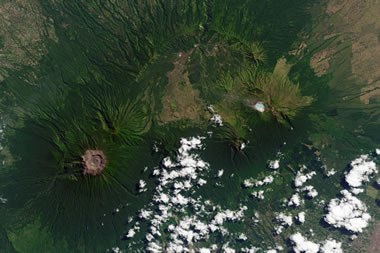 About 300,000 years ago, volcanic activity in this area began building a large stratovolcano that is called "Old Ijen" today. Over thousands of years and repeated eruptions, it grew to an elevation of about 10,000 feet. Lava flows and pyroclastic deposits from Old Ijen disconformably overly the Miocene limestone.

Then, about 50,000 years ago, a series of enormous explosive eruptions produced a caldera about ten miles in diameter. About twenty cubic miles of material was ejected and covered the surrounding landscape up to 300 to 500 feet deep in ejecta and volcanic ash.


In the past 50,000 years, many small stratovolcanoes have formed within Old Ijen's caldera and covered its southern and eastern margins. Kawah Ijen covers part of the eastern margin. Thousands of years of weathering have converted the pyroclastic deposits into rich, fertile soils which now support coffee plantations. 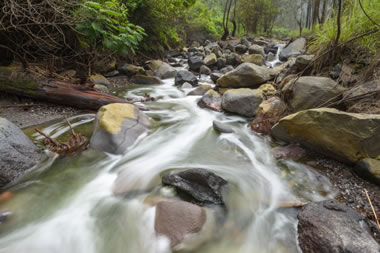 Acid stream: Water that leaves the crater lake through rare overflows or through groundwater seepage enters the drainage basin of the Banyupahit River, where it is the cause of natural pollution. Image copyright iStockphoto / Rat0007.


Acidic Streams Below the Caldera

Water enters the caldera lake as rain and as runoff from a limited drainage area. Water and gases also enter through hydrothermal vents on the bottom of the lake. Rarely, overflow water goes over a spillway on the west side of the lake and into the Banyupahit River drainage basin. "Banyupahit" is a local word that means "bitter water."

Water also leaves the lake through underground seepage and enters tributaries of the Banyupahit River. As this water enters the drainage basin, it has a pH and dissolved metals content similar to the caldera lake. As it flows downstream, it is diluted by runoff and springs from sources that are not influenced by hydrothermal activity. These waters raise the pH of the river, add oxygen, and cause dissolved metals to precipitate out into the stream channel. This is a source of natural pollution that degrades the drainage basin, the sediments, and lowers the quality of water that can be withdrawn for irrigation use.