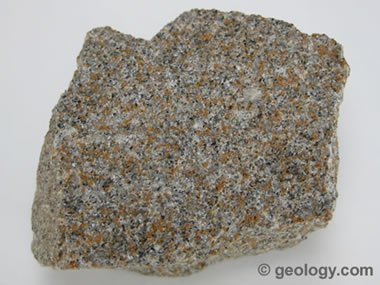 Sandstone: A specimen of sandstone approximately two inches (five centimeters) across. A closer view of this specimen is in the photo below.

Sandstone is a sedimentary rock composed of sand-size grains of mineral, rock, or organic material. It also contains a cementing material that binds the sand grains together and may contain a matrix of silt- or clay-size particles that occupy the spaces between the sand grains.

Sandstone is one of the most common types of sedimentary rock, and it is found in sedimentary basins throughout the world. Deposits of sand that eventually form sandstone are delivered to the basin by rivers, but may also be delivered by the action of waves or wind. Some sand grains might be organic particles, such as sand and shell debris produced within the basin.

If the sandstone is durable, it might be used to make crushed stone for construction projects. If it has a very high quartz content, it might be crushed and used as a source of silica for glass manufacturing. Layers of sandstone below Earth's surface can serve as aquifers for groundwater or as a reservoir for oil and natural gas.

To a geologist, the word "sand" in sandstone refers to the particle size of the grains in the rock, rather than the material of which it is composed. Sand-size particles range in size from 1/16 millimeter to 2 millimeters in diameter. Sandstones are rocks composed primarily of sand-size grains. 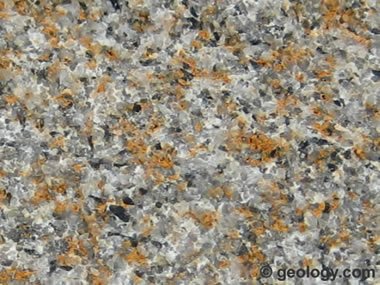 Sandstone: Close-up view of the sandstone specimen shown above. The gray and white grains are mostly quartz, the black grains are particles of impure coal and shale, and the brown material is stained clay minerals that probably formed when feldspar grains in the sandstone were broken down by weathering.

Weathering and Transport of Sand

The grains of sand in a sandstone are usually particles of mineral, rock, or organic material that have been reduced to "sand" size by weathering and transported to their depositional site by the action of moving water, wind, or ice. Their time and distance of transport may be brief or significant, and during that journey the grains are acted upon by chemical and physical weathering.

If a granite outcrop is the source of the sand, the original material might be composed of grains of hornblende, biotite, orthoclase, and quartz. Of these minerals, hornblende and biotite are the most chemically and physically susceptible to destruction, and they would be eliminated in the early stage of transport.

Orthoclase and quartz would persist longer, but the grains of quartz would have the greatest chance of survival. They are more chemically inert, harder, and not prone to cleavage. Quartz is often the most abundant type of sand grain present in sandstone. It is abundant in source materials and is the most durable during transport.

The grains in a sandstone can be composed of mineral, rock, or organic materials. Which and in what percentage depends upon their source and how they were altered during transport.

Mineral grains in sandstones are usually quartz. Sometimes the quartz content of these sands can be very high - up to 90% or more. These are sands that have been worked and reworked by wind or water and are said to be "mature." Other sands can contain significant amounts of feldspar, and if they came from a source rock with a significant quartz content, they are said to be "immature."