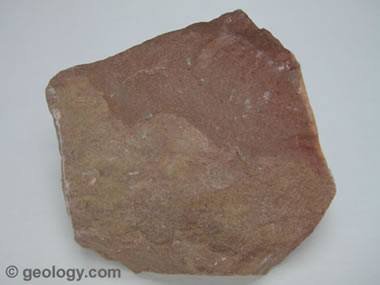 Siltstone Colors: Siltstone occurs in a wide variety of colors. It is usually gray, brown, or reddish brown. It can also be white, yellow, green, red, purple, orange, black, and other colors. The colors are a response to the composition of the grains, the composition of the cement, or stains from subsurface waters. Specimens in the photo are about two inches across. Click for larger image.

Siltstone is a sedimentary rock composed mainly of silt-sized particles. It forms where water, wind, or ice deposit silt, and the silt is then compacted and cemented into a rock.

Silt accumulates in sedimentary basins throughout the world. It represents a level of current, wave, or wind energy between where sand and mud accumulate. These include fluvial, aeolian, tidal, coastal, lacustrine, deltaic, glacial, paludal, and shelf environments. Sedimentary structures such as layering, cross-bedding, ripple marks, erosional contacts, and fossils provide evidence of these environments.

Siltstone is much less common than sandstone and shale. The rock units are usually thinner and less extensive. Only rarely is one notable enough to merit a stratigraphic name.

The word "silt" does not refer to a specific substance. Instead, it is a word used for loose granular particles in a specific size range.

Silt-sized particles range between 0.00015 and 0.0025 inches in diameter, or between 0.0039 and 0.063 millimeters in diameter. They are intermediate in size between coarse clay on the small side and fine sand on the large side.

Grains of coarse silt are large enough that most people can see them without magnification on a background of contrasting color. Most people are not able to sense them if they roll a few grains of silt between their thumb and index finger. Most people are able to detect a few grains of silt by biting them gently between their front teeth. (This test is not recommended, but some experienced geologists and soil scientists use it for quick field identification of silt in sediment and soil.)

What Color is Siltstone?

Siltstone occurs in a wide range of colors. It is usually gray, brown, or reddish brown. White, yellow, green, red, purple, orange, black, and other colors occur. The color is caused by the composition of the grains, the composition of the cement that binds them together, and stains produced by contact with subsurface waters. 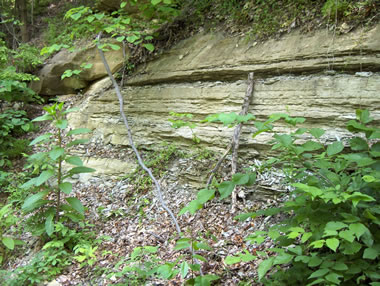 Siltstone Outcrop: An exposure of the Holtzclaw siltstone near Louisville, Kentucky. It shows the thinly bedded and differentially weathered character of the rock unit. Siltstones are rarely of sufficient thickness or lateral persistence to merit a stratigraphic name. Public domain photo by John Knouse.

Siltstone can be difficult to identify in the field without close examination. Weathered surfaces often appear to show sedimentary structures where none are present. Different layers weather at different rates. Siltstone is often interbedded with other lithologies.

Identification requires breaking off a small piece and observing the grain size. Scraping the surface with a nail or knife blade will dislodge tiny silt grains instead of dislodging sand grains or producing a white effervescent powder.

Siltstone has very few uses. It is rarely the target of mining for use as a construction material or manufacturing feedstock. The intergranular pore spaces in siltstone are too small for it to serve as a good aquifer. It is rarely porous enough or extensive enough to serve as an oil or gas reservoir. Its main use is as a low-quality fill when better materials are not locally available. 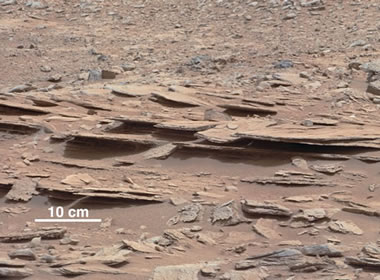 Siltstone on Mars: Photo of an outcrop of sedimentary rocks inside the Gale Crater on Mars. Many of the rocks in Gale Crater are almost identical to some of the shales and siltstones found here on Earth. Image by NASA's Mars Curiosity Rover.

As NASA and the space agencies of other countries explore the moons and planets of our solar system, they are finding many examples of sedimentary rocks. Some of these are thought to be deposited by water, but some are also thought to have been deposited by winds.

As an example, in the Gale Crater of Mars, NASA's Curiosity Rover photographed an outcrop of sedimentary rocks that is believed to be made up of interbedded shales and siltstones - based upon the size of the grains in the rocks (see accompanying photo). In outcrop, these rocks look almost exactly like outcrops of shales and siltstones here on Earth. However, their grains and cementing agents are likely different from most of the sedimentary rocks found here on Earth.

See our article about Rocks on Mars for more examples of how rocks on other planets can have analogs here on Earth.