Fuchsite and Ruby in Fuchsite

Many people use the word "fuschite" for this material. That is a misspelling. 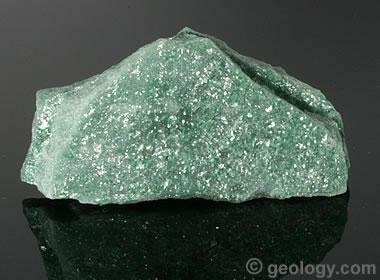 Fuchsite: Photograph of a verdite specimen consisting almost exclusively of fuchsite platelets with a foliated texture. Specimen is approximately 2 inches across.

Fuchsite is a green variety of muscovite mica. It differs from most other muscovite by having a variable amount of trivalent chromium substituting for aluminum within the mineral. Chromium is the source of fuchsite’s green color.

Fuchsite is found in phyllites and schists in metamorphic rocks of the greenschist facies. In most instances it occurs as tiny grains scattered through the rock mass, but occasionally rocks composed almost entirely of fuchsite are found. These green fuchsite-rich rocks are known as "verdite."

Fuchsite is one of the most commonly misspelled minerals - especially in the lapidary market. It is often spelled (and pronounced) "fuschite" with a long "u" and a long "i". The material is named after Johann Nepomuk von Fuchs, a German chemist and mineralogist. His name is pronounced "fooks" - similar to the way you pronounce "books" and "looks." 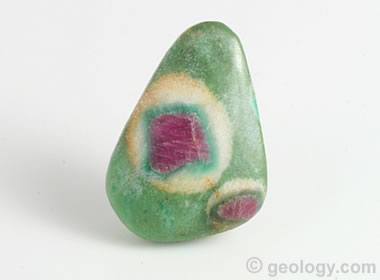 Ruby in Fuchsite: Photo of a ruby-in-fuchsite cabochon with a rim of blue kyanite around the red ruby crystal. This blue kyanite rim is diagnostic of ruby in fuchsite and can be used to avoid misidentification as ruby in zoisite. Cabochon is about 1 inch in height.

Fuchsite and Verdite as Gem Materials

Verdite is usually soft and fragile; however, some competent specimens can be cut into cabochons and polished to a very high luster. Some people who cut verdite stabilize it for cutting by gluing it to a backing. Thin slices of black obsidian, basalt, or another black material are often used as backing.

Verdite is typically a foliated rock, with the mica grains oriented with their flat faces perpendicular to the direction of compression. The most attractive orientation of verdite when cutting cabochons is with the mica flakes aligned parallel to the bottom of the cab. Then, when the dome on the cabochon is cut and polished, the mica flakes reflect light and produce a green aventurescence. 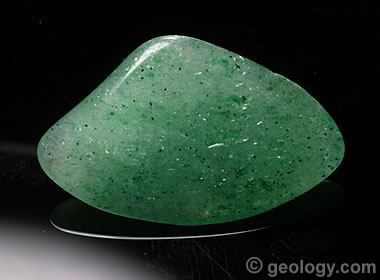 Green Aventurine: Photo of green aventurine as a tumble-polished stone. In this photo you can see the green mica flakes suspended in the quartz.

Sometimes small platelets of fuchsite or other green micas are suspended in quartz to produce the gem known as green aventurine. It has become a very popular and typically inexpensive gem material that is cut into cabochons, beads, and small sculptures. It is also very popular as tumbled stones. Green aventurine is much more frequently seen as a gem material than verdite, fuchsite, and ruby in fuchsite combined. See tumbled stone photo. 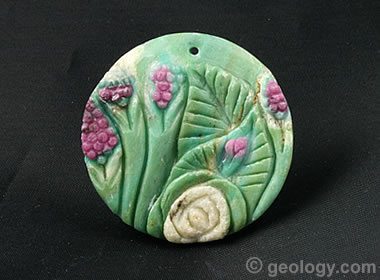 Carved Ruby in Fuchsite (Verdite): A pendant carved from ruby in fuchsite in which the artist took advantage of the red rubies to produce flowers. Blue kyanite alteration rims can be seen around the rubies.

What is "Ruby in Fuchsite"? 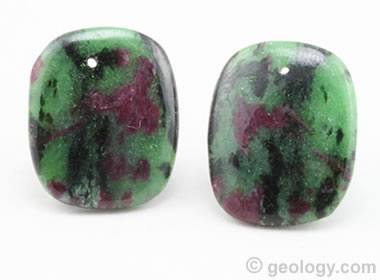 Ruby-in-Zoisite Cabochons: Two ruby-in-zoisite cabochons. Note that they do not show blue kyanite alteration rims around the ruby. The material also has the characteristic scatter of black hornblende crystals.

3) Ruby in zoisite is usually marked with a scattering of black hornblende crystals.

The next time you are at a rock, gem, or mineral show, watch for green and red cabochons or carvings. If you see blue alteration rims, it is probably ruby in fuchsite.