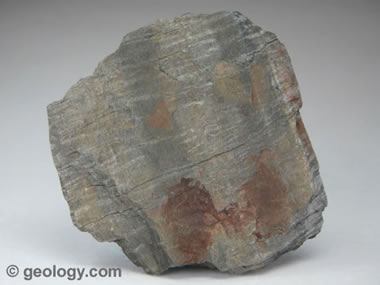 Phyllite: A specimen of phyllite that exhibits the lustrous and wrinkled surface common to this rock type.

Phyllite is a foliated metamorphic rock that has been subjected to low levels of heat, pressure and chemical activity. It is composed mainly of flake-shaped mica minerals in parallel alignment. The strong parallel alignment of the mica grains allows the rock to be easily split into sheets or slabs. The alignment of the mica grains gives phyllite a reflective sheen that distinguishes it from slate, its metamorphic precursor or protolith. Phyllite is usually gray, black, or greenish in color and often weathers to a tan or brown. Its reflective sheen often gives it a silvery, nonmetallic appearance.

Phyllite is a very common metamorphic rock, found in many parts of the world. It forms when sedimentary rocks are buried and mildly altered by the heat and directed pressure of regional metamorphism. These are almost always convergent plate boundary environments involving continental lithosphere. 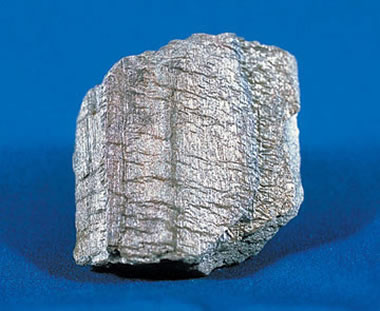 How Does Phyllite Form?

Phyllite was originally a fine-grained sedimentary rock such as shale or mudstone, composed mainly of clay minerals in a semi-random orientation. The rock was then buried and subjected to enough directed pressure to move the clay mineral grains towards parallel alignment, and enough heat and chemical activity to begin transforming the clay mineral grains into chlorite or a mica mineral. At that point, it was the metamorphic rock known as slate.

Continued heat and chemical activity completed the clay-to-mica transformation and caused the mica grains to enlarge. Additional directed pressure brought the mica grains into a strong parallel alignment. The result is the rock known as "phyllite". 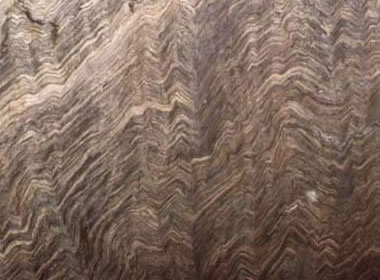 Phyllite in Outcrop: This is a photo of phyllite in an outcrop of the Loudoun Formation taken near Furnace Mountain, eastern Blue Ridge, Loudoun County, Virginia. It shows the foliation, lamination and folding of the rock in cross-sectional view. It also shows one of the brown colors commonly seen on the surface of weathered phyllite. Public domain image by the United States Geological Survey.

Phyllite is composed mainly of tiny grains of mica minerals such as muscovite, or sericite. Fine-grained quartz and feldspar are often abundant in phyllite. These mineral grains are usually smaller than what can be easily seen with the unaided eye. They form through the low-grade metamorphic transformation of clay minerals.

Crystals of other metamorphic minerals such as andalusite, biotite, cordierite, garnet, and staurolite might also form within phyllite. Their crystals often grow large enough to be seen and identified with the unaided eye. These larger crystals are known as porphyroblasts. When organic-rich shale is the initial protolith of phyllite, the organic materials are often transformed into graphite. Many phyllites contain enough mica to give them a black color and a submetallic luster.

Phyllite does not have any important industrial uses. It is not strong enough to serve well as a crushed stone. However, slabs of phyllite are occasionally trimmed and used as landscape, paving or sidewalk stone.

Phyllite can provide valuable information about the geologic conditions that a geographic area or a rock mass was subjected to in the past. It is a low-grade metamorphic rock that reveals the upper limit of heat and pressure to which the rocks were exposed.