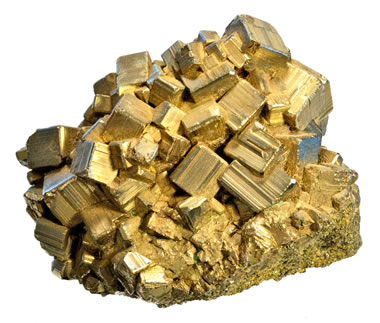 What Is Fool's Gold?

"Fool's gold" is a common nickname for pyrite. Pyrite received that nickname because it is worth virtually nothing, but has an appearance that "fools" people into believing that it is gold. With a little practice, there are many easy tests that anyone can use to quickly tell the difference between pyrite and gold.

The nickname "fool's gold" has long been used by gold buyers and prospectors, who were amused by excited people who thought they had found gold. These people did not know how to tell the difference between pyrite and gold, and their ignorance caused them to look foolish. 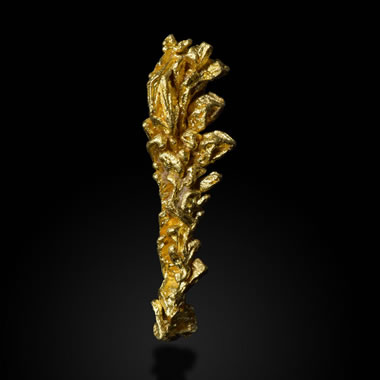 Crystalline Gold: A specimen of native gold from Pontes e Lacerda, Mato Grosso, Brazil, approximately 3.5 centimeters tall. This specimen is visually appealing and displays the crystalline habit of gold. The value of this specimen to collectors of crystalline gold would be many times the value of its contained gold. Destructive tests should not be done on specimens of gold that display a crystalline habit or specimens of no trivial size that have an attractive appearance. This photo was taken by Carlin Green of the United States Geological Survey.

CAUTION: All pieces of gold are valuable. However, any piece of gold with a nice crystal habit will have a premium value - often worth several times the value of its contained gold. That premium value can be ruined by some of the tests explained below. So, we have separated the tests into "destructive tests" and "non-destructive tests". Be careful if you think that you might have a valuable gold specimen. 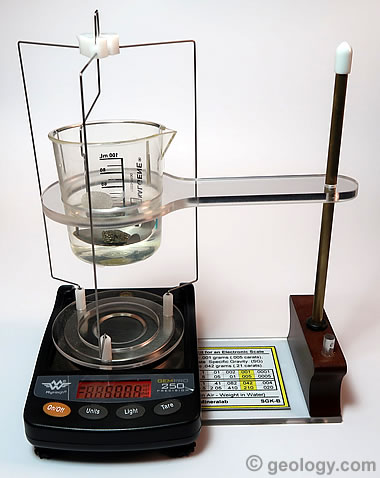 A) Tarnish: Most specimens of pyrite, found in nature, will have at least some tarnish on their surface. Nuggets or small flakes of gold are usually bright and untarnished.

B) Color: Pyrite has a brassy color. Gold has a golden to yellow color. Most native gold is alloyed with silver, and if the silver content is high enough, the specimen will have a whitish yellow color.

C) Shape: Pyrite is usually found as angular pieces, and many of them exhibit the faces of a cube, octahedron or pyritohedron. Most gold particles found in streams have slightly rounded edges, but be careful - some crystalline gold specimens can display a crystal habit that is similar to pyrite.

D) Striations: Many crystals of pyrite have fine parallel lines on their faces. Gold crystals do not have striations. 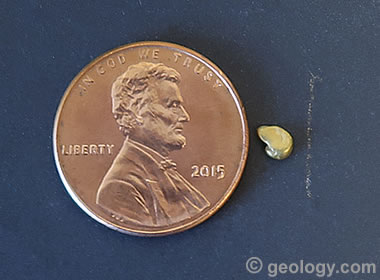 Gold's Streak: A copper penny and a tiny gold nugget on a black streak plate, with a small streak made by the nugget. The copper penny is in the photo to serve as a scale. The tiny nugget weighs 0.0035 troy ounce, and at a gold price of $1200/ozt the nugget, if it were pure gold, would have a gold value of $4.20. The tiny mark left by the streak plate removed about $0.06 worth of gold from the nugget.

A) Streak: Gold has a yellow streak. Pyrite has a greenish black streak. Learn how to do the streak test here.

C) Ductility: Gold is very ductile, and a tiny piece of gold will bend or dent with pressure from a pin or a pointed piece of wood. Tiny pieces of pyrite will break or resist the pressure. 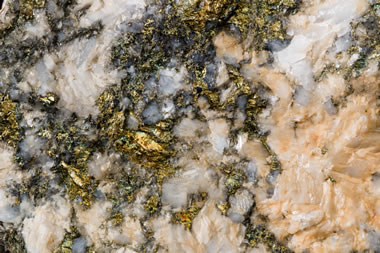 Chalcopyrite in Dolomite and Quartz: Gold-colored minerals can be tested even if they are embedded in a rock. The gold-colored mineral in this rock is chalcopyrite, and a person could determine that it is not gold by poking the gold-colored material with a pin and observing if it dents or breaks. This photograph is by Scott Horvath of the United States Geological Survey. Click to enlarge.

Other Minerals Can Fool You!

Chalcopyrite and small pieces of biotite or phlogopite mica can fool you. Chalcopyrite (a copper iron sulfide) has very similar properties to pyrite. It has a lower hardness than pyrite (3.5 to 4) and a lower specific gravity than pyrite (4.1 to 4.3), but the same tests can separate chalcopyrite from gold. Chalcopyrite also has a greenish black streak.

Pyrrhotite is an iron sulfide mineral with a chemical composition of Fe(x-1)S. It has a high specific gravity, often has a brassy color, and a distinctly metallic luster. It is easy to separate pyrite and pyrrhotite because pyrrhotite is magnetic, is much softer, and if you can see crystals they will be a very different shape.

Many people are surprised that flakes of biotite or phlogopite mica can fool people into thinking that they are gold. This most often occurs when an inexperienced person is panning for gold and sees a bright flash in their gold pan. After chasing the tiny, highly lustrous flake, they think that it might be gold. However, slight pressure with a pin can break the flake of mica, but a tiny flake of gold will bend around the pin.