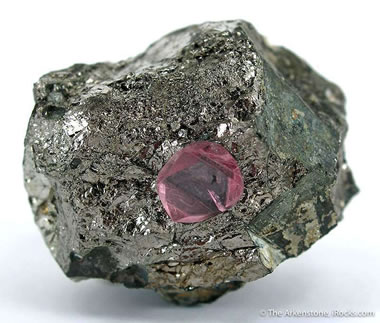 Pyrrhotite is an iron sulfide mineral found in igneous and metamorphic rocks. Its chemical formula of Fe(1-x)S indicates that it is deficient in iron - which causes pyrrhotite to be slightly to strongly magnetic. After magnetite, pyrrhotite is the second-most-common magnetic mineral.

Pyrrhotite is relatively easy to identify. Specimens have a bronze color, and most display tarnish - which is often iridescent. At first glance, pyrrhotite can be confused with other brassy-colored sulfide minerals, but its Mohs hardness is only 3.5 to 4, and most specimens are at least slightly magnetic. No other brass-to-bronze-colored sulfides are magnetic.

Most pyrrhotite has a massive or granular habit. When well-formed crystals are present, they will be either monoclinic (sometimes with striations), or hexagonal (prismatic or tabular).

Commercial deposits have been found where pyrrhotite and pentlandite were concentrated by magmatic separation. This process occurs in a magma chamber when pyrrhotite crystals form within the melt, then sink to the bottom of the magma because of their high density. A layer of pyrrhotite and other heavy minerals with a similar crystallization temperature accumulate on the floor of the magma chamber. 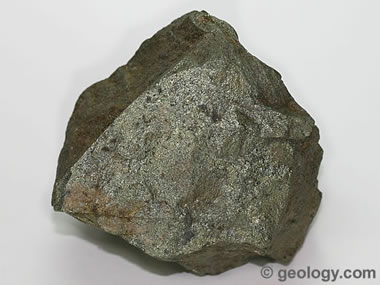 Pyrrhotite is often intergrown with pentlandite (Fe,Ni)9S8, the principal ore of nickel. The two minerals are usually mined together if the nickel content of the rock mass is high enough. Some pyrrhotite contains as much as 5% nickel by weight. That can be enough for the pyrrhotite to be mined as an ore of nickel. [1]

Pyrrhotite has been a historic source of iron and sulfur. However, the iron extracted was contaminated with sulfur - which made the iron unsuitable for use. Sulfur is no longer made from pyrrhotite because it is more economically obtained from other sources.

At some localities, pyrrhotite occurs as well-formed crystals that are popular with mineral collectors. Excellent specimens retail for thousands of dollars. 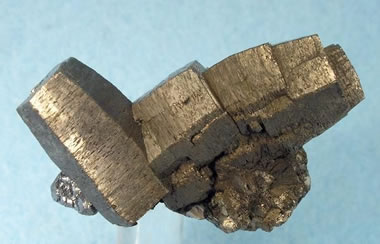 Pyrrhotite is similar to another iron sulfide mineral named troilite. Troilite has a chemical composition of FeS, while pyrrhotite's chemical composition is Fe(1-x)S. Pyrrhotite is deficient in iron because some of the iron sites in its crystal lattice are vacant (empty). That is why the iron in the formula has a subscript of 1-x. The value of "X" in the chemical formula of pyrrhotite can range between 1 and 0.17.

The missing iron atoms in a pyrrhotite crystal alter its electrical charge, and that influences the level of magnetic response. The more vacancies, the more magnetic the pyrrhotite. 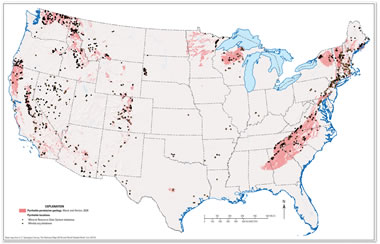 Most of the concrete used in construction projects is made from crushed stone mined nearby. Some geographic areas are plagued with the problems of crumbling and cracking concrete. Research has associated many of these concrete failures to the presence of sulfide minerals in the local rocks used as construction aggregate.

Three sulfide minerals, pyrite, marcasite, and pyrrhotite, have been found in the crushed stone used to make these problem concretes. When these minerals are exposed to moisture and oxygen, they are transformed into sulfate minerals that occupy a greater volume. Their expansion can crack or crumble the concrete parts of the building.

Of the three sulfide minerals, pyrrhotite causes the most volume change. To inform concrete manufacturers and construction companies of this problem, the United States Geological Survey published a report with an explanation of the problem and a map of potential pyrrhotite occurrence. [2]