The primary ore of zinc and a gemstone with a "fire" that exceeds diamond. 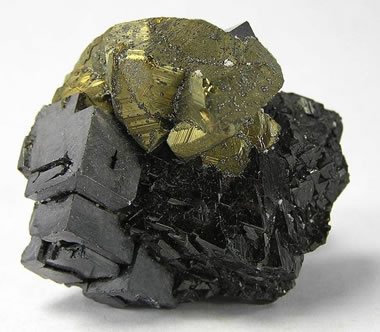 Sphalerite is a zinc sulfide mineral with a chemical composition of (Zn,Fe)S. It is found in metamorphic, igneous, and sedimentary rocks in many parts of the world. Sphalerite is the most commonly encountered zinc mineral and the world's most important ore of zinc.

The name sphalerite is from the Greek word "sphaleros" which means deceiving or treacherous. This name is in response to the many different appearances of sphalerite and because it can be challenging to identify in hand specimens. Names for sphalerite used in the past or by miners include "zinc blende," "blackjack," "steel jack," and "rosin jack."

Many minable deposits of sphalerite are found where hydrothermal activity or contact metamorphism has brought hot, acidic, zinc-bearing fluids in contact with carbonate rocks. There, sphalerite can be deposited in veins, fractures, and cavities, or it can form as mineralizations or replacements of its host rocks.

In these deposits, sphalerite is frequently associated with galena, dolomite, calcite, chalcopyrite, pyrite, marcasite, and pyrrhotite. When weathered, the zinc often forms nearby occurrences of smithsonite or hemimorphite. 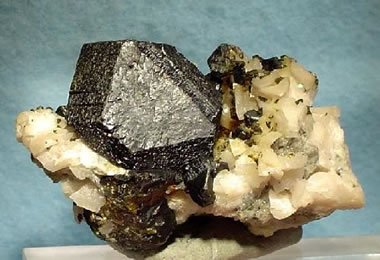 The chemical formula of sphalerite is (Zn,Fe)S. It is a zinc sulfide containing variable amounts of iron that substitutes for zinc in the mineral lattice. The iron content is normally less than 25% by weight. The amount of iron substitution that occurs depends upon iron availability and temperature, with higher temperatures favoring higher iron content.

Sphalerite often contains trace to minor amounts of cadmium, indium, germanium, or gallium. These rare elements are valuable and when abundant enough can be recovered as profitable byproducts. Minor amounts of manganese and arsenic can also be present in sphalerite. 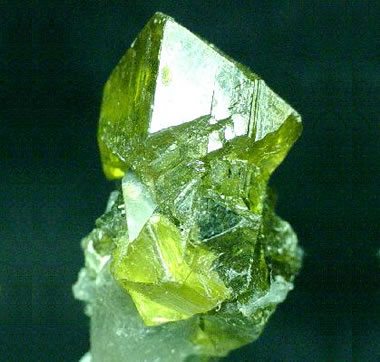 Sphalerite crystals: Gem-quality crystals of yellow sphalerite from the Balmat-Edwards Zinc District of New York. Specimen is about 2.75 x 1.75 x 1.5 centimeters in size. Specimen and photo by Arkenstone / www.iRocks.com. 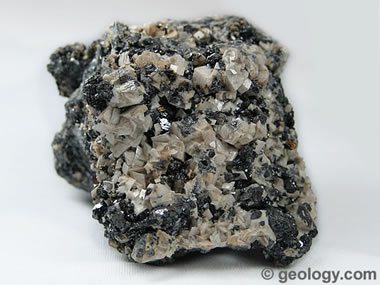 Sphalerite: Sphalerite with dolomite from Gilman, Colorado. Specimen is approximately 5 centimeters across.

The appearance and properties of sphalerite are variable. It occurs in a variety of colors, and its luster ranges from nonmetallic to submetallic and resinous to adamantine. Occasionally it will be transparent with a vitreous luster. Sphalerite's streak is white to yellowish brown and sometimes is accompanied by a distinct odor of sulfur. Occasionally it streaks reddish brown.

One of the most distinctive properties of sphalerite is its cleavage. It has six directions of perfect cleavage with faces that exhibit a resinous to adamantine luster. Specimens that display this distinctive cleavage are easy to identify. Unfortunately, many specimens have such a fine grain size that the cleavage is difficult to observe.

Because sphalerite often forms in veins and cavities, excellent crystals are relatively common. Sphalerite is a member of the isometric crystal system, and cubes, octahedrons, tetrahedrons, and dodecahedrons are all encountered. 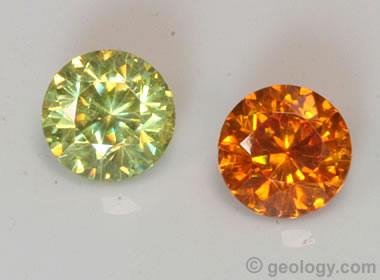 Sphalerite gemstones: Sphalerite is occasionally cut as a faceted stone. It is a popular stone with collectors because it has a dispersion that is three times higher than the dispersion of diamond. The stones occur in a spectrum of colors ranging from yellowish green, to yellow, to orange, to red. To exhibit the excellent dispersion the stones must have a very high clarity. Sphalerite's very low hardness (3.5 to 4 on the Mohs scale) and perfect cleavage make the mineral a very poor choice for any jewelry except pieces such as earrings and brooches that will receive very little abrasion or impact. It is considered to be a "collector's stone."

Sphalerite as a Gemstone?

Although sphalerite has a hardness of just 3.5 to 4 on the Mohs scale and is not suitable for most jewelry use, specimens with excellent clarity are sometimes cut into gemstones for collectors. Why? Sphalerite has a dispersion that exceeds that of all of the popular gems and is three times higher than the dispersion of diamond.

Dispersion is the ability of a material to separate white light into the colors of the spectrum as it passes through the material. Diamond is well known for its exceptional "fire" - flashes of color as the gem is moved under a source of light. These are caused by its high dispersion of 0.044. Common natural gems that have a dispersion higher than diamond are sphene at 0.051 and demantoid garnet at 0.057. Sphalerite has an incredible dispersion of 0.156. The only things that hold specimens of sphalerite back from an incredible display of brilliant "fire" are their less-than-excellent clarity and their obvious body color.

Sphalerite is a difficult stone to cut and polish. It is soft and it has cleavage. Weaknesses in the stone or minor accidents during the cutting or polishing process can easily ruin a stone. Before deciding to cut a transparent specimen of sphalerite into a gemstone, its value as a mineral specimen should be determined. If this is not done, the owner could make a costly mistake.