Titanite is a minor ore of titanium and a minor gemstone known as "sphene." 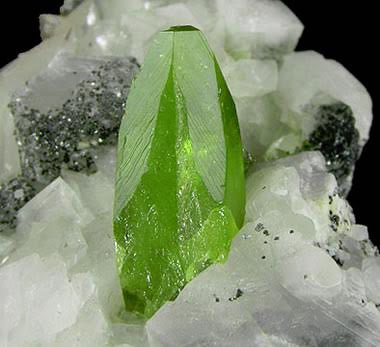 Titanite: A twinned crystal of titanite with adularia and clinochlore on matrix. The crystal is about one inch (2.5 centimeters) in height. From Tormiq Valley, Haramosh Mountains, Skardu District, Baltistan, Northern Areas, Pakistan. Specimen and photo by Arkenstone / www.iRocks.com.

Titanite is a rare titanium mineral that occurs as an accessory mineral in granitic and calcium-rich metamorphic rocks. It is a minor ore of titanium and a minor gemstone known as sphene.

Titanite's diagnostic properties are its crystal habit, color, and luster. Its monoclinic crystals are often wedge-shaped or tabular-shaped. Its typical color range is yellow, green, brown, and black. Pink, orange, and red specimens are rare.

Titanite has a resinous to adamantine luster that is rarely seen in other minerals. It has one of the highest dispersions of any mineral - significantly higher than diamond. Titanite is also pleochroic. Transparent specimens might show its three trichroic colors.

Titanite is sometimes confused with sphalerite, especially when observing an adamantine to resinous luster. Sphalerite is softer than titanite, and often produces an odor of sulfur immediately after a streak test. 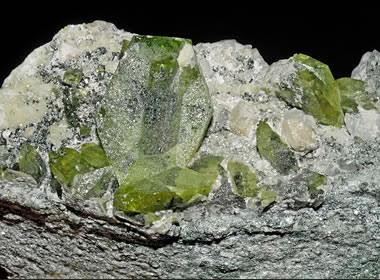 The name "sphene" is still the dominant usage in the gem, jewelry, and lapidary industries. There, a name change can cause severe disruption in marketing gemstone and jewelry products. 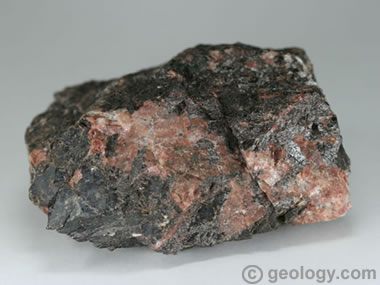 Pink Titanite: Massive pink titanite from Westport, Ontario, Canada. Pink is a rare color for this mineral. Specimen is approximately 10 centimeters across.

Titanite has a chemical composition of CaTiSiO5 and sometimes contains rare earth elements such as cerium, niobium, and yttrium. It can contain other elements such as aluminum, chromium, fluorine, iron, magnesium, manganese, sodium, and zirconium.

Titanite is a rare mineral. It occurs as an accessory mineral in a few igneous rocks that include granite, granodiorite, diorite, syenite, and nepheline syenite. It is sometimes present in marble or calcium-rich gneiss and schist. It often occurs as individual grains. When abundant, its habit is usually granular to massive. The best crystals are usually found in marble.

Unlike other titanium minerals, titanite is rarely found in placer deposits. Its cleavage, parting, and a low hardness make it vulnerable to the abrasion of stream transport. 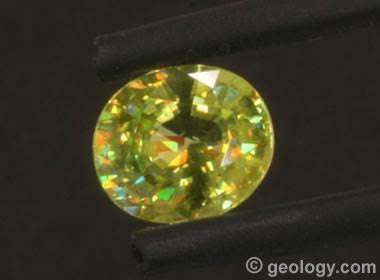 Sphene: A greenish yellow faceted sphene, back illuminated to show its very high dispersion. This 8 x 6 millimeter oval was cut from material mined in Pakistan.

Sphene continues to be the name used for titanite in the gem and jewelry industries. It is a minor gemstone that is popular with collectors because of its high dispersion. Sphene is one of the few minerals with a dispersion higher than diamond. The dispersion of diamond is 0.044, while the dispersion of sphene is 0.051. Specimens of sphene with high clarity can display a strong, colorful fire when light is passed through them (see accompanying image).

Sphene is not commonly seen in jewelry. Its hardness of 5 to 5.5 on the Mohs scale, along with its easy cleavage and parting, make it too fragile as a ring stone. Reliable supplies of cut stones in commercial quantities have not been developed, and the jewelry-buying public is unfamiliar with the gem. For these reasons, sphene has not become a mainstream gem that is commonly available in jewelry.