An extrusive igneous rock with a very high silica content. 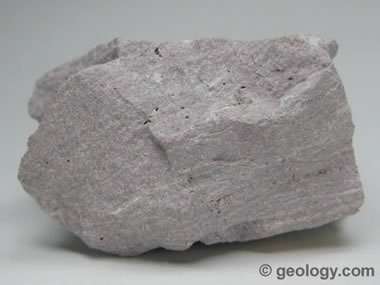 Rhyolite: A pink specimen of rhyolite with numerous very tiny vugs with some evidence of flow structures. The specimen shown here is about two inches across.

Rhyolite is an extrusive igneous rock with a very high silica content. It is usually pink or gray in color with grains so small that they are difficult to observe without a hand lens. Rhyolite is made up of quartz, plagioclase, and sanidine, with minor amounts of hornblende and biotite. Trapped gases often produce vugs in the rock. These often contain crystals, opal, or glassy material. 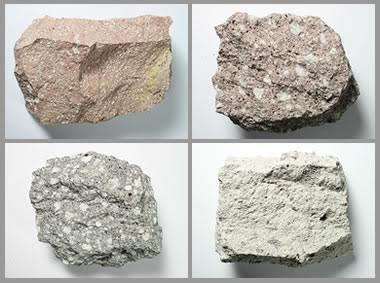 Rhyolite Porphyry: Several specimens of rhyolite porphyry, each about three inches across. Click the image to enlarge.

Eruptions of granitic magma are rare. Since 1900 only three are known to have occurred. These were at St. Andrew Strait Volcano in Papua New Guinea, Novarupta Volcano in Alaska, and Chaiten Volcano in Chile.

The high gas content and high viscosity of these magmas are perfect for producing an explosive eruption. The viscosity can be so high that the gas can only escape by blasting the magma from the vent.

Granitic magmas have produced some of the most explosive volcanic eruptions in Earth's history. Examples include Yellowstone in Wyoming, Long Valley in California, and Valles in New Mexico. The sites of their eruption are often marked by large calderas. 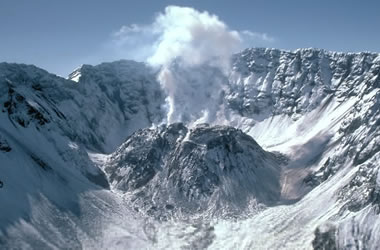 Lava Dome: Photo of a lava dome in the caldera of Mount St. Helens. Activity at St. Helens slowly extrudes thick lavas that gradually build domes in the caldera. This dome is composed of dacite, a rock that is intermediate in composition between rhyolite and andesite. Photo by the United States Geological Survey.

Sluggish rhyolitic lava can slowly exude from a volcano and pile up around the vent. This can produce a mound-shaped structure known as a "lava dome." Some lava domes have grown to a height of several hundred meters.

Lava domes can be dangerous. As additional magma extrudes, the brittle dome can become highly fractured and unstable. The ground can also change slope as the volcano inflates and contracts. This activity can trigger a dome collapse. A dome collapse can lower the pressure on the extruding magma. This sudden lowering of pressure can result in an explosion. It can also result in a debris avalanche of material falling from the tall collapsing dome. Many pyroclastic flows and volcanic debris avalanches have been triggered by a lava dome collapse. 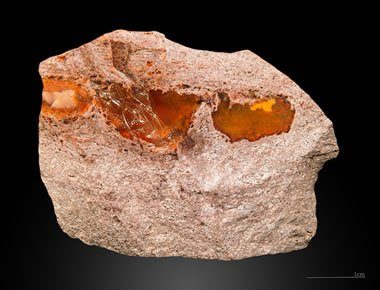 Fire Opal is sometimes found filling cavities in rhyolite. This specimen of rhyolite has multiple vugs filled with gemmy transparent orange fire opal. This material can be cut into beautiful cabochons and is sometimes faceted when it is transparent or even translucent. Famous deposits of this type of fire-opal-in-rhyolite are found in Mexico. This photo is used here through a Creative Commons license. It was produced by Didier Descouens.

Many gem deposits are hosted in rhyolite. These occur for a logical reason. The thick granitic lava that forms rhyolite often cools quickly while pockets of gas are still trapped inside of the lava. As the lava quickly cools, the trapped gas is unable to escape and forms cavities known as "vugs." Later, when the lava flow has cooled and hydrothermal gases or ground water move through, material can precipitate in the vugs. This is how some of the world's best deposits of red beryl, topaz, agate, jasper, and opal are formed. Gem hunters have learned this and are always on the lookout for vuggy rhyolite. 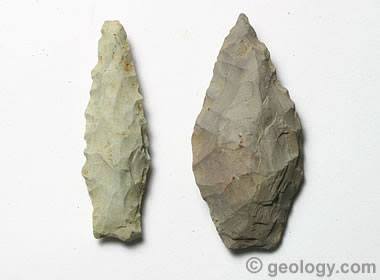 Rhyolite Arrowheads: Rhyolite was often used to make stone tools and weapons when more suitable materials were not available. It has been fashioned into scrapers, hoes, axe heads, spear points, and arrowheads.

Rhyolite is a rock that is rarely used in construction or manufacturing. It is often vuggy or highly fractured. Its composition is variable. When better materials are not locally available, rhyolite is sometimes used to produce crushed stone. People have also used rhyolite to manufacture stone tools, particularly scrapers, blades, and projectile points. It was probably not their material of choice, but a material used out of necessity.