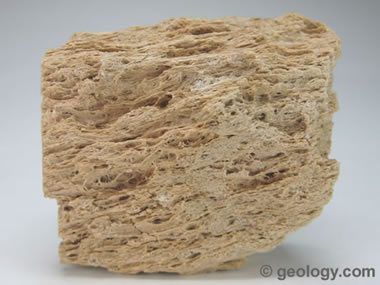 Pumice: This specimen shows the frothy vesicular texture of pumice. It has a specific gravity of less than one and will float on water. It is about five centimeters (two inches) across.

Pumice is a light-colored, extremely porous igneous rock that forms during explosive volcanic eruptions. It is used as aggregate in lightweight concrete, as landscaping aggregate, and as an abrasive in a variety of industrial and consumer products. Many specimens have a high enough porosity that they can float on water until they slowly become waterlogged. 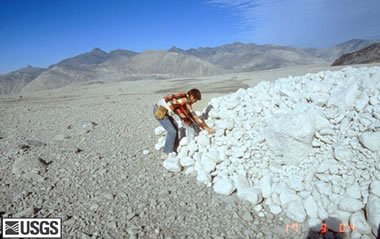 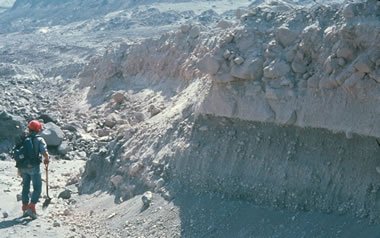 How Does Pumice Form?

The pore spaces (known as vesicles) in pumice are a clue to how it forms. The vesicles are actually gas bubbles that were trapped in the rock during the rapid cooling of a gas-rich frothy magma. The material cools so quickly that atoms in the melt are not able to arrange themselves into a crystalline structure. Thus, pumice is an amorphous volcanic glass known as a "mineraloid."

This is similar to the large amount of dissolved carbon dioxide in a sealed bottle of carbonated beverage such as beer or soda. If you shake the container, then immediately open the bottle, the sudden release of pressure allows the gas to come out of solution, and the beverage erupts from the container in a frothy mess.

A rising body of magma, supercharged with dissolved gas under pressure, behaves in a similar way. As the magma breaks through Earth's surface, the sudden pressure drop causes the gas to come out of solution. This is what produces the enormous rush of high-pressure gas from the vent.

This rush of gas from the vent shreds the magma and blows it out as a molten froth. The froth rapidly solidifies as it flies through the air and falls back to Earth as pieces of pumice. The largest volcanic eruptions can eject many cubic kilometers of material. This material can range in size from tiny dust particles to large blocks of pumice the size of a house.

Large eruptions can blanket the landscape around the volcano with over 100 meters of pumice and launch dust and ash high into the atmosphere.

The sections below give quotations from United States Geological Survey reports describing the production of pumice at two major eruptions. 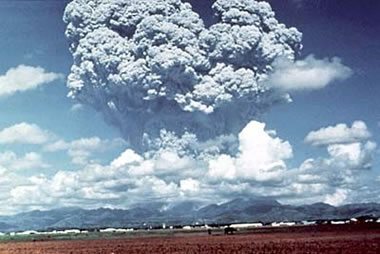 Pinatubo eruption: The explosive eruption of Mount Pinatubo in the Philippines on June 12, 1991 ejected more than five cubic kilometers of material and was rated as a VEI 5 eruption on the volcanic explosivity index. Much of that material was pumice lapilli (see image below) that blanketed the landscape around the volcano. USGS image. 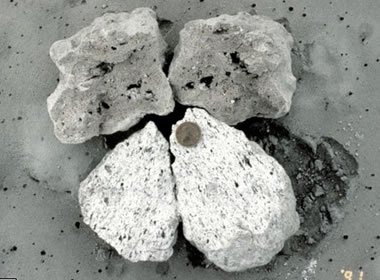 Gas and Pumice at the Pinatubo Eruption

The second most powerful volcanic eruption of the 20th century was at Mount Pinatubo in 1991. The description below explains how enormous volumes of dissolved gas powered the eruption and how a cubic mile of ash and pumice lapilli was blasted from the volcano.

When even more highly gas charged magma reached Pinatubo's surface on June 15, the volcano exploded in a cataclysmic eruption that ejected more than 1 cubic mile of material. [...] A blanket of volcanic ash and pumice lapilli blanketed the countryside.

Huge avalanches of searing hot ash, gas, and pumice roared down the flanks of Mount Pinatubo, filling once-deep valleys with fresh volcanic deposits as much as 660 feet thick. The eruption removed so much magma and rock from below the volcano that the summit collapsed to form a large volcanic depression 1.6 miles across." [1] 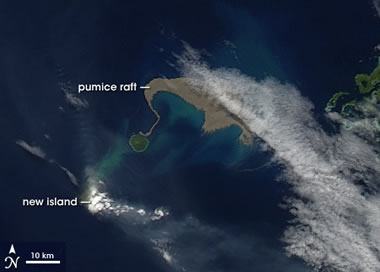 Pumice raft: A "raft" of lightweight pumice floating on the surface of the South Pacific after an eruption in the Tonga Islands. NASA image.

"The cataclysmic eruption of Mount Mazama 7,700 years ago started from a single vent on the northeast side of the volcano as a towering column of pumice and ash that reached some 30 miles high. Winds carried the ash across much of the Pacific Northwest and parts of southern Canada. So much magma erupted that the volcano began to collapse in on itself. As the summit collapsed, circular cracks opened up around the peak. More magma erupted through these cracks to race down the slopes as pyroclastic flows. Deposits from these flows partially filled the valleys around Mount Mazama with up to 300 feet of pumice and ash. As more magma was erupted, the collapse progressed until the dust settled to reveal a volcanic depression, called a caldera, 5 miles in diameter and one mile deep." [2] 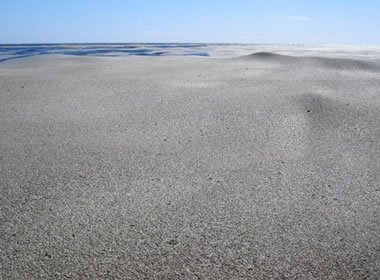 Pumice raft: View of a pumice raft from a boat. Waves can be seen moving under the pumice. The rafts can float for years until all of the pumice becomes waterlogged and sinks or it is dissipated by waves and wind. USGS image.

Most pumice erupts from magmas that are highly charged with gas and have a rhyolitic composition. Rarely, pumice can erupt from gas-charged magmas of basaltic or andesitic composition. 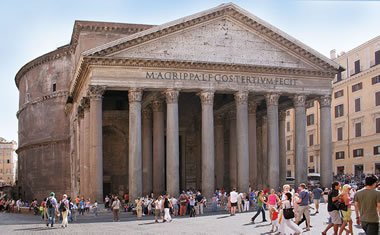 Pantheon: Some of the concrete used to construct the Pantheon by the Romans in 126 AD was lightweight material made with pumice aggregate. Photography by Roberta Dragan, used under a Creative Commons license.

Large amounts of pumice produced by some island and subsea eruptions will float on the surface and be pushed about by the winds. The pumice can float for long periods of time - sometimes years - before it finally becomes waterlogged and sinks. Large masses of floating pumice are known as "pumice rafts." They are large enough to be tracked by satellites and are a hazard to ships that sail through them (see images). [3] [4] 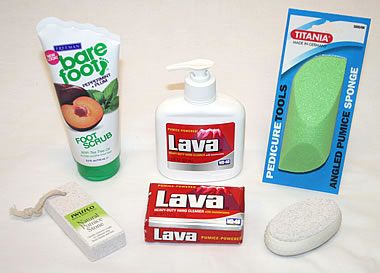 Pumice products: A variety of health and beauty products that contain pumice. They include the famous "Lava Soap" that cleans dirty hands with tiny pieces of pumice abrasive, a foot scrub cream that works as an exfoliant to smooth "sandal feet," two pumice stones, and a sponge with embedded pumice abrasive.

The largest use of pumice in the United States is the production of lightweight concrete blocks and other lightweight concrete products. When this concrete is mixed, the vesicles remain partially filled with air. That reduces the weight of the block. Lighter blocks can reduce the structural steel requirements of a building or reduce the foundation requirements. The trapped air also gives the blocks a greater insulating value.

Pumice has many other uses. Together these account for less than a few percent of consumption in the United States, but these are the products that most people think of when they hear the word "pumice."

Lots of people have found small pumice pebbles in the pockets of brand new "stone washed jeans," and almost everyone has seen the famous "Lava Soap" that uses pumice as an abrasive. Below we list these and some of the other minor uses of pumice (in no particular order). [5] 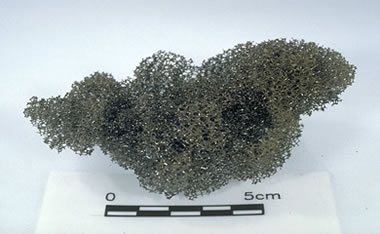 Pumice Reticulite: Reticulite is a basaltic pumice in which all of the bubbles have burst, leaving a honeycomb structure. Photograph by J.D. Griggs, USGS image.

Pumice is produced in two forms: rock pumice and pumicite. "Pumicite" is a name given to very fine-grained pumice (less than 4 millimeters in diameter down to submillimeter sizes). The word can be used synonymously with "volcanic ash." It is mined from volcanic ash deposits, or it can be produced by crushing rock pumice.

About 500,000 metric tons of pumice and pumicite were mined in the United States in 2011. The total value of this pumice was about $11,200,000, or an average of about $23 per ton at the mine. The producing states were, in order of decreasing production:

In the eastern United States, expanded aggregate, produced by heating specific types of shale under controlled conditions, is used as a substitute for pumice in lightweight aggregate, horticultural, and landscaping applications.