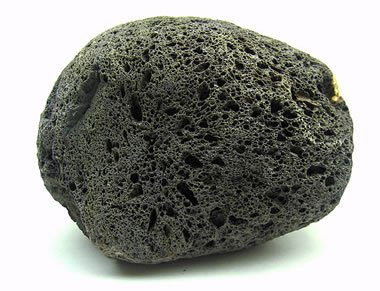 Scoria: A piece of scoria about 4 inches (10 centimeters) in diameter. Specimens with a rounded shape like this have usually been transported in a stream. This photograph was taken by Jonathan Zander and is used under a GNU Free Documentation License.

Many people believe that small pieces of scoria look like the ash produced in a coal furnace. That has resulted in particles of scoria being called "cinders" and the small volcanoes that erupt scoria to be called "cinder cones." 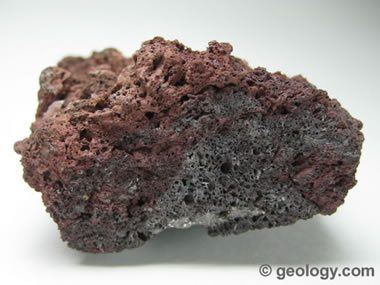 Scoria: The specimen shown is about two inches (five centimeters) across.

How Does Scoria Form?

Scoria forms when magma containing abundant dissolved gas flows from a volcano or is blown out during an eruption. As the molten rock emerges from the Earth, the pressure upon it is reduced and the dissolved gas starts to escape in the form of bubbles. If the molten rock solidifies before the gas has escaped, the bubbles become small rounded or elongated cavities in the rock. This dark-colored igneous rock with the trapped bubbles is known as scoria.

When some volcanoes erupt, a rush of gas blows out of the vent. This gas was once dissolved in the magma below. The gas often blows out small bodies of magma that solidify as they fly through the air. This action can produce a ground cover of scoria all around the volcanic vent, with the heaviest deposits on the downwind side. 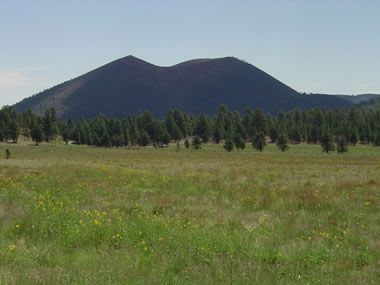 Most of the scoria falls to the ground near the vent to build up a cone-shaped hill called a "cinder cone." Cinder cones are generally small volcanoes produced by brief eruptions with a total vertical relief of less than a few thousand feet. They are usually very steep because scoria has an angle of repose of 30 to 40 degrees.

In some parts of the world, cinder cones occur in clusters of a few to hundreds of individual cones. These areas are called "volcano fields." An example of a volcano field is the San Francisco Peaks Volcanic Field near Flagstaff, Arizona, which contains over 500 cinder cones. 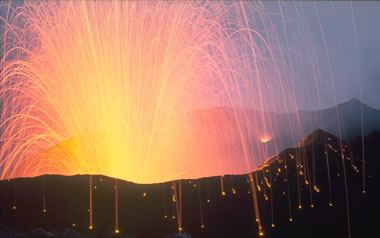 Stromboli ejecta: Magma being blown from the vent at Stromboli Volcano. This type of eruption would produce the small scoria cinders known as "lapilli." Photo by B. Chouet, USGS.

Some newly erupted lava flows contain abundant dissolved gas. The gas bubbles in the flow move upwards towards the surface in an attempt to escape while the lava is still molten. However, once the lava starts to solidify, the bubbles are trapped in the rock. These trapped gas bubbles are known as vesicles.

If the upper portion of a lava flow contains a large concentration of vesicles, it is often called "scoria" or "vesicular basalt." This material often has fewer vesicles and a higher specific gravity than the scoria of lapilli. 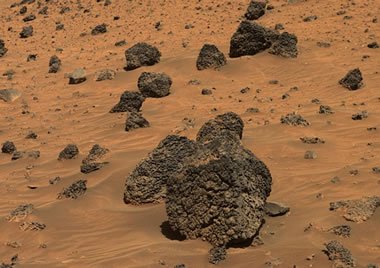 Scoria on Mars: This image shows a field on Mars that is strewn with pieces of scoria, erupted from a Martian volcano. The piece of Martian scoria in the foreground is about 18 inches across and was found on the surface of Mars by the Spirit Rover. NASA image.

Have you ever slowly opened a bottle that contains a carbonated beverage and watched the gas bubbles form on the walls of the bottle? Then as the seal on the bottle is broken, the bubbles grow larger and a hiss of gas escapes from the bottle, followed by a rush of foam. The depressurization and the escape of gas from a beverage is the same process that occurs when magma is depressurized as it emerges from a volcanic vent. The foam is equivalent to what will become scoria on solidification. 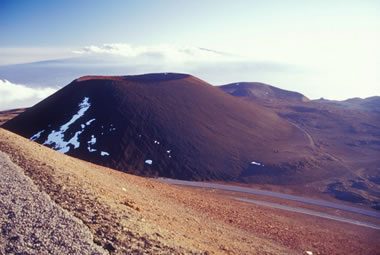 Not to be Confused with Pumice

A vesicular igneous rock that is very similar to scoria is pumice. There are a few differences that can be used to distinguish them. First is their color. Scoria is almost always black or dark gray to reddish brown, while pumice is almost always white to light gray to light tan. This color difference is a result of their composition. Scoria forms from basaltic magmas, while pumice forms from rhyolitic magmas - which usually contain more gas.

Pumice has a much higher concentration of trapped bubbles - so many that the walls between them are very thin. The vesicles in pumice contain enough air that the rock will float on water. The thick walls of scoria make it heavy enough to sink.

Finally, when observed closely with a hand lens, you can often see tiny mineral crystals in scoria. However, close observation of pumice reveals a "glassy" texture similar to obsidian. Pumice consists mainly of glass materials rather than mineral crystals. A "glass" is a noncrystalline substance. In the case of pumice, it cooled so quickly that the atoms were unable to arrange themselves into ordered crystal structures. 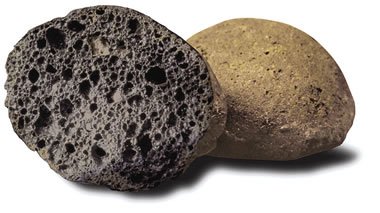 Expanded aggregate: Photograph of "light expanded clay aggregate," a scoria look-alike that is produced by heating certain types of clay in a rotating kiln. Organic material and moisture in the clay produce gas that causes vesicles similar to those found in scoria. Straight from the kiln, the material has a smooth exterior, but when broken the vesicular structure is exposed. Expanded aggregate is used as landscape stone, lightweight concrete, lightweight fill, and as a substrate for hydroculture. Public domain image by Leca67.

One of the main uses of scoria is in the production of lightweight aggregate. The scoria is crushed to desired sizes and sold for a variety of uses.

Concrete made with scoria typically weighs about 100 pounds per cubic foot. This is a weight savings compared to concrete made with typical sand and gravel that weighs about 150 pounds per cubic foot. This savings in weight allows buildings to be constructed with less structural steel. The air trapped in the scoria makes the lightweight concrete a better insulator. Buildings constructed with this lightweight concrete can have lower heating and cooling costs.

Crushed scoria is used as roofing granules, ground cover in landscape projects, and as a substrate in hydroponic gardening. Many dealers offer customers the option of choosing between black, brown, or red material. Scoria is also used as rip-rap, drainage stone, and low-quality road metal. Small amounts of scoria are used as sauna rock and as a heat sink in barbecue grills.

Where scoria is not available, a lightweight aggregate can be produced by heating shale in a rotating kiln under controlled conditions. With the proper type of shale, the material will have the properties, appearance, and vesicles of scoria. It is sold under the name "expanded aggregate," "expanded clay," or "grow rocks" and used for the same purposes as crushed scoria.

Author's note: "I am usually a cheerleader for the mining industry, but I will admit that it troubled me to see a cinder cone being removed to produce aggregate."