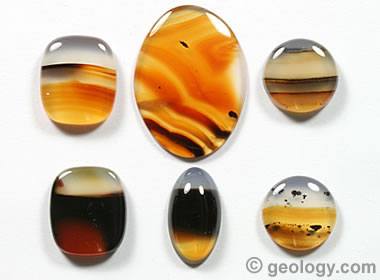 Montana agate: A bright collection of agate cabochons cut from rough found in Montana. They show a diversity of banding patterns and mossy inclusions.

Agate is a translucent variety of microcrystalline quartz. It is used as a semiprecious stone when it is of desirable quality and color.

Agate generally forms by the deposition of silica from groundwater in the cavities of igneous rocks. The agate deposits in concentric layers around the walls of the cavity, or in horizontal layers building up from the bottom of the cavity. These structures produce the banded patterns that are characteristic of many agates. Some of these cavities are lined with crystals and those are known as geodes.

Agate occurs in a wide range of colors, which include brown, white, red, gray, pink, black, and yellow. The colors are caused by impurities and occur as alternating bands within the agate. The different colors were produced as groundwaters of different compositions seeped into the cavity. The banding within a cavity is a record of water chemistry change. This banding gives many agates the interesting colors and patterns that make it a popular gemstone. 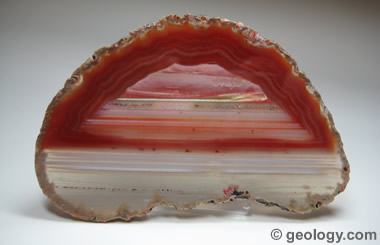 Agate slab: A polished agate slab cut from a nodule with an interesting history. The bottom of the nodule was first infilled by horizontal layering of silica, then concentric infilling, and finally another episode of horizontal filling.

Agates have been used as gemstones for thousands of years. They were some of the earliest stones fashioned by people. Today they are cut into cabochons, beads, small sculptures, and functional objects such as paperweights and bookends. Agate cabochons are popular and are used in rings, earrings, pendants, and other jewelry objects. Agate beads are commonly made into necklaces and earrings. Some have been used as marbles. 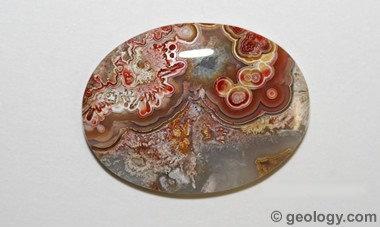 Crazy Lace cabochon: A cabochon cut from Mexico's Crazy Lace agate. Crazy Lace has an infinite variety of bands, orbicular structures, and lacy patterns. It is one of the best-known agate varieties. 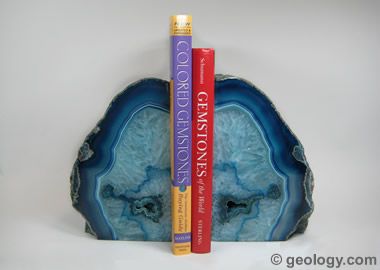 Agate bookends: A matched pair of bookends cut from a large agate nodule. The blue color was produced with dye. Bookends are a popular lapidary product made from large agate nodules. They are functional, beautiful and scientifically interesting. 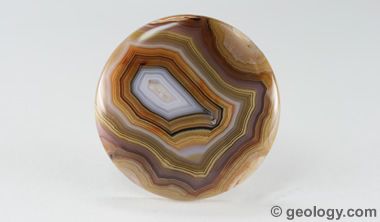 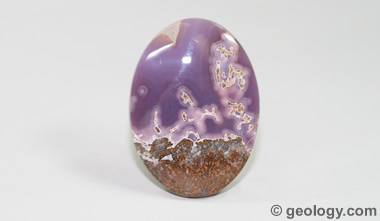 Agate is the most popular rough for producing tumbled stones. It is generally inexpensive and can be tumbled with good results by beginners. It has a Mohs hardness of seven and can be loaded into a rock tumbler with jasper and any of the quartz varieties. 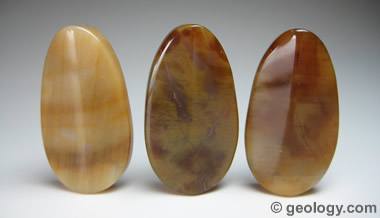 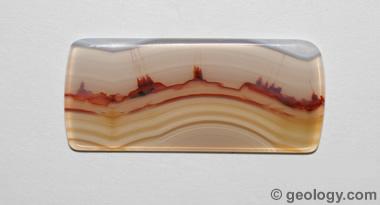 Landscape agate: A polished slab of landscape agate that yields a "Monument Valley" scene. Interesting landscape agates are prized by collectors. This specimen is about 50 x 20 x 3 millimeters in size. 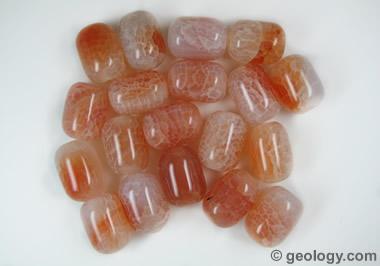 Most agate has unimpressive colors and patterns. However, agate is a porous material that readily accepts dye. Most of the spectacularly colored agates sold in the gemstone trade have been dyed. Rarely, the color patterns of an agate form interesting landscape scenes. These are sought after by collectors.